Taking a break soon, here're some things to pick up while we're away.
Coming Soon 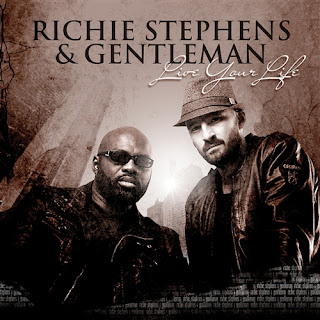 
First up this week, most interestingly, is an which is linking together two longtime friends and stars in Reggae music as Jamaican veteran Richie Stephens (who already has an album out for 2012, "God Is On My Side") links with German superstar Gentleman on the combination album, "Live Your Life". This is a very big deal. Stephens, for his part, has always been known as being someone very easy to work with and it is his label, Pot Of Gold [w/VP Records] which handles this album, while Gentleman has always gone out of his way  to work with just about anyone in Reggae and some even outside of it. I've had a pretty nice look at this one already and I was very curious as to how it would be worked. In its fourteen tracks, four come from Gentleman, five come from Stephens (including the title track from his aforementioned recent release) while the duo work as a pair on the album's remaining five tunes. As I've said in the past, I've never been the biggest fan of Stephens', but I am a big fan of Gentleman's so I'm really looking forward to this one. 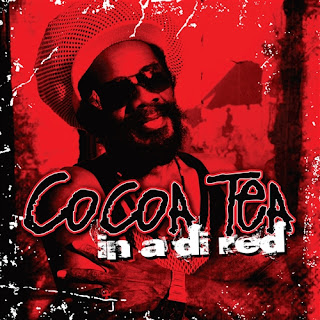 "In A Di Red" by Cocoa Tea [Roaring Lion Records]


I had to actually think really hard to recall when exactly was the last time that sweet singing veteran, the incomparable Cocoa Tea, had actually released an album - it was 2008's "Yes We Can" - and him ending that time is a wonderful thing which is what he's done in the form of his forthcoming new album, "In A Di Red". Cocoa Tea is someone who, I think, for the most part regularly tends to do albums which go unnoticed compared to his stature. His last set, although it took me awhile to recall it (I have serious, serious problems with my brain, however), was an exception, and hopefully that attention maintains itself through to this one as well. I have a pretty good feeling about this set and guesting spots from the likes of Lady G and D'Angel only add to the flames so definitely check the new album from Cocoa Tea, "In A Di Red", when it reaches. 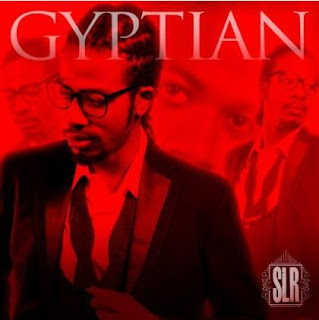 
It's pretty much a forgone conclusion that we'll be hearing from Gyptian, in a full album form, next year, but just to make sure you're still holdin on (surely you caught that), the artist and VP Records are doing a six tracked digital EP (which is ALREADY very popular), "SLR" ["Sex, Love & Reggae"]. This is another big deal and it's been shown already. Gyptian is someone in the prime of his career and at the peak of his popularity, so the album will do well when we get it, but fully expect this set, which is highlighted by his remake of Gregory Isaacs' 'Number One', to HOLD everyone's attention until 2013. 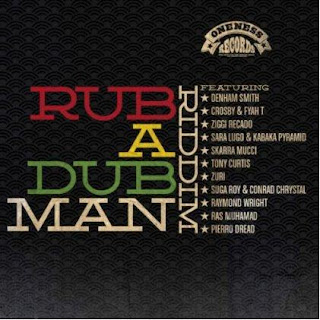 
Big up to all of our friends for letting us know a… about… oh forget about that. Look up and who's back?! Already in offering a dazzling year, between the BEAUTIFUL new album from Mark Wonder, "Working Wonders" and the best riddim album of 2012 thus far, the ReggaeVille Riddim, Oneness Records from out of Germany returns with their latest creation, the Rub A Dub Man Riddim! DAMN! This riddim I was actually a bit familiar with as I had heard it on its title track via Denham Smith (big new album, "Come Wid It", in stores now) and it's well HEAVY and somewhat of a change from what we're used to from Oneness, although not a great deviation at all. Joining Mr. Smith in the vocal department for the Rub A Dub Man Riddim is, as usual, a very mixed group of artists. The biggest and most recognizable name is Statian supernova Ziggi Recado, veterans Tony Curtis & Raymond Wright (separately), the impressive Ras Muhammad from out of Indonesia and others round out the names appearing here… Oh and there's also a combination between one Kabaka Pyramid and a SARA LUGO! The dynamic duo who are still blazing with their big tune from Da Ville Riddim, 'High & Windy', once again link up and figure to reach similar levels with the hypnotic 'Trying'. 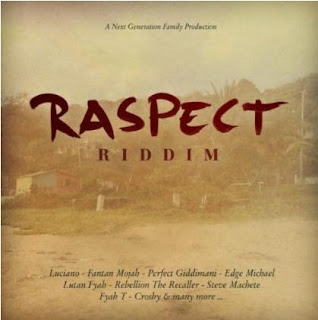 
And another one. I THINK that Family Music is the label of colourful German veteran, Fyah T, but even if I'm wrong, whoever they are, they link with a label I've never heard of, Oneness Records (WHO!), to push up the Raspect Riddim, which is GORGEOUS! I love this composition and once I got a good look at the names on board, I was even happier. Lutan Fyah, Luciano, Perfect Giddimani, Rebellion The Recaller (new album, "In This Time", in stores now), Fantan Mojah, Ras Muhammad and even Baby G (not the one you're thinking of, but a VERY talented vocalist from out of 'Nina) all make appearances here. And I was SO happy to see the presence of the woefully under-recorded Steve Machete as well. Talk about good feelings and good expectations, there is NO WAY this won't be very good, so definitely pick up the Raspect Riddim when you can. 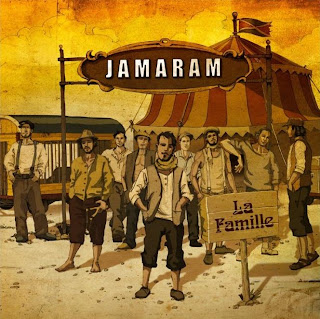 
I know not a damn thing, really, about Jamaram and I was actually somewhat surprised to listen to clips of their new album and actually hear singing because I didn't think that they did that. But they do and you can hear them do it, and pretty well according to the clips, when you pick the German band's brand new album the somewhat bluesy and very catchy "La Famille". 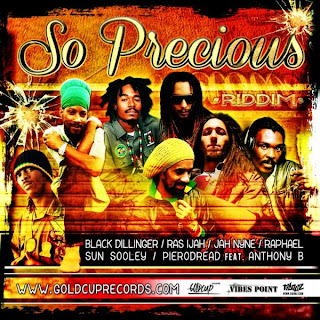 The So Precious Riddim [Goldcup Records]


Goldcup Records from out of Italy is also back in September with their own new riddim, the So Precious. Checking in at just six tunes, this piece does manage to grab attention via some of the names appearing as well as due to the fact that it's another sterling creation on this list. You might know this track from its title piece which features Anthony B alongside Piero Dread and reached earlier this year. Joining that duo is a nice group which includes Jah Nyne, of course, Ras Ijah and even South African star, Black Dillinger. 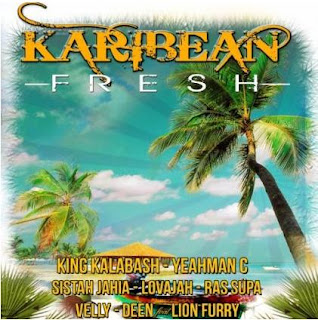 
I probably wouldn't have mentioned the Karibean Fresh Riddim at all if I had been able to successfully get it out of my head. I wasn't, AT ALL, so here it is. The set comes courtesy of Bring Love Music and while it doesn't necessarily carry the biggest of names, almost all of those present appear to do a fine job. The two you're likely to recognize are Yeahman'C (I used to get messages from Yeahman'C because we mentioned his album a long time ago) ("Le Bon", in stores now) and King Kalabash, but also check the wildly talented Sista Jahia and Ras Supa whose supa tune, 'Lanmou Fo', may just prove to be the single biggest moment here. 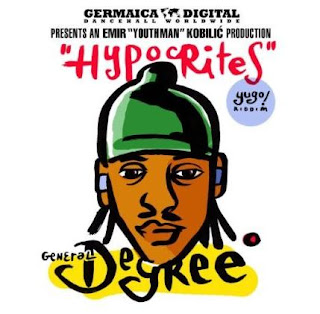 
And finally, coming soon this week is just a big, big tune from WICKED underrated veteran DJ, General Degree & the fine people at Germaica, 'Hypocrites'. The tune comes through on their Yugo Riddim and… that's it. Big tune from Degree. Pick it up. MAD! 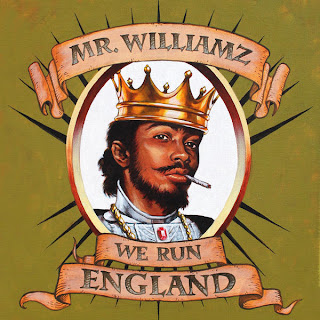 'We Run England' by Mr. Williamz [Soul of The Lion]


Ridiculously gifted UK based DJ, Mr. Williamz, is back already with yet another big tune which originally reached last year through Green Lion and is now getting an official run courtesy of friends of ours, Soul of The Lion (which does a lot of big things behind the scenes for quite a few different labels, so big them up). Already in 2012 Mr. Williamz has, seemingly, once again reached an excellent point in his career and 'We Run England' is something else which just goes to show how proficient he can be when anywhere near his best. This tune kind of traces Mr. Williamz' history back a bit and he even relays his 'encounters' with the royal family. Love listening to Williamz rhyme and while I most unfortunately am STILL waiting on an official album release, tunes like this make the delay seem shorter so definitely pick it up today. Like right now. 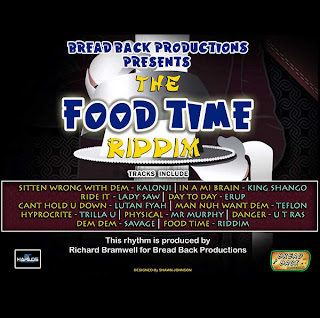 
And lastly is one of my favourite riddims of 2012 which now comes through on the digital side. Breadback Productions has been doing some HEAVY work over the last couple of years in particular and their latest set has to be considered one of their finest to date. Of course, I go out of my way to make a point of and celebrate when I find a LEGITIMATE Dancehall riddim which is also a very good one or better and that's what we have in the Food Time Riddim. Although maybe somewhat derivative, I love this thing, it's fantastic and it plays a nice backdrop for several big names and big tunes on its full form. Sizzla Kalonji, Capleton, Lady Saw, Lutan Fyah, Teflon and Erup all take their turns on the track as does, wonderfully, the always excited UT Ras. This is a big set here now and one definitely not to be missed. This post is over - go but all of this stuff!