March Artist of The Month: The Uprising Roots Band 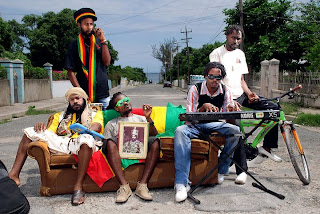 As far as artists and acts with whom my wonderful readers may have not been too familiar with before I covered them, I can only say that two have attracted the type of attention and response generated by the very recent Uprising Roots Band. Of course there was Toussaint, who dropped an album which sparked so many across so many boundaries and there’s been Sara Lugo - Quite the different case, because I basically talk about her everyday. While the URB may very well fall into the first category someday soon (although I doubt it), they definitely aren’t going to fall into the second. No. The big response I’ve gotten from them has to do with the same thing I mentioned in my review of their WONDERFUL debut album and one of the best Reggae albums of the year to this point, ”Skyfiya” - THEY MAKE REALLY GOOD REGGAE MUSIC. 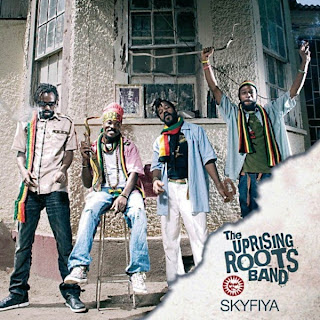 "Skyfiya"
The band is fronted by the son of the legendary Winston McAnuff, Rashaun ‘Black Kush’ McAnuff, who also plays the drums, but in a group such as this, where the overall sound and the overall songs are the actual stars, it is definitely important to highlight all of the members. The biggest name of the group is probably the venerable Winston ‘Bopee’ Bowen, who plays the guitar and also there is Ruel ‘Pot-a-Rice’ Ashburn, Lloyd ‘Akinsanya’ Palmer and Joseph ‘Jr. Congo’ Sutherland (apparently the URB prescribes to the same ideology that I do - EVERYONE gets a nickname). Together they form the Uprising Roots Band which was formed only in 2006 and in terms of being a self-contained and self-responsible group - Meaning everything that it takes to make the music, they’re able to do it - They may already be at the top of the proverbial food chain for Jamaican Reggae bands which, these days, tend to be more of backing bands for a rotating field of lead singers, which is not the case for the URB. They do it all.

On top of that, again, is the fact that their music is EXCELLENT! The band has gelled together so wonderfully and so quickly that the result of their works is IMMEDIATELY evident when listening through almost any spot of their work. Perhaps that has something to do with the fact that they’ve played with and backed some of the biggest artists in the business - A roster which includes the likes of Gyptian, Lutan Fyah, Turbulence, Natural Black and even the great Sugar Minott. On its own, the URB also scored with its first big hit, the title track from its then forthcoming album, the aforementioned ‘Skyfiya’.

'Skyfiya'
It definitely says something about the tune (and probably about me as well) when I actually listened to this song well over ten times before I realized what was going on. It is, essentially, a chorus. There are no verses to the song, but the sound is so FULL and so FULFILLING that, even for someone like myself who is so often fixated on the lyrics of a tune (and you go over there > and see just how engrossed I am - The lyrics tag count currently stands at 79). This is just world class Roots Reggae musicianship and craft which is the exact same thing which has made the URB a very new favourite amongst our readers (and my readers, by definition, are geniuses. 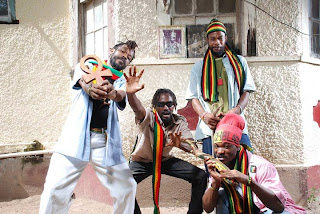 Besides the title track, the album also includes a whole heap of big and potential classic tunes such as ‘Krash Like Lightening’, ‘Marcus Garvey’, ‘Most Royal’ and others. Particularly of interest, however, are the tunes, ‘Brightest Light’, the single ‘Brighter Days’ and ‘Shinin' So Bright’, all of which allude to the concept evident on the title track (and in the name of the group) of the UPRISING and of the rising of the most powerful sun. When you look at this, it is such a refreshing take on the usage of ‘the fire’, as a concept in Reggae. So many times we hear ‘fyah bun’ and other variations of that - Where the fire is looked upon and brought in as both a cleansing element and a destructive one. The URB, by contrast, looks to the fire in the sky, the sun, the sky fire as the SOURCE - It is the all empowering force and it is not to be flung upon something or someone because it is already supposed to be within them (“the brightest light, shines from within“)! That type of ‘bone-intelligence’ and natural intelligence is present throughout their music directly and indirectly through their craft as well. 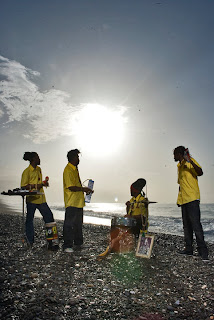 So! First of all what you need to do, if you haven’t already, is to pick up the brand new debut album from the Uprising Roots Band, “Skyfiya” from Tru Musik Productions and DP&B Entertainment (digitally via Zojak Worldwide) and then, going forward, do keep an eye and an ear out for their future works because this group has the potential to not only lead themselves to making years and years of powerful music, but maybe also bringing the notion of a big and mighty band back to Jamaican Reggae music. Yes - They’re that good.


{Note: See Album Review}
{Note 2: Should you work for/with the URB and want to link one of these features (THANK YOU!) you may want to use to the direct links - The album can be found just above and this feature can be found on the header or HERE}
Posted by Achis at 12:40 AM