How quickly we forget. Before Vybz Kartel started to . . . Do other stuff, he was quite easily one of the most inventive and destructive lyricists the Dancehall has ever seen. Drawing comparison to such a wide variety of predecessors, including Bounty Killer, Papa San and Madd Anju, the Portmore DJ with the very strange delivery was tapped to be amongst the next generation of artists and a future leader of the pack - Someone who would, someday, seemingly inspire his own fleet of up and comers. Well, a few years on and all of that has come true, although certainly not in the way that most of us would have imagined and maybe not even have hoped. Still, I frequently go back to what I consider to be his prime and pre-prime years of the era circa 2003-06 (the 'up 2 di time' years) (down to di minute!) and am STILL just as frequently amazed at what this man was capable of. This was a time when the Dancehall was truly (and I hate to use a cliché) experiencing someone who was not only at the absolute height of their talents, but was also 'ahead of his time'. Here, we look at ten very random and ‘punctual’ and potent phrases from The Minister of Time - Vybz Kartel [back when no one knew how to actually spell his damn name and wondered why he had the name of an entire crew and was only one person].

"Come sen on di pussy mek mi show you how fi manage it
Doctor haffi bandage it -
When mi finish damage it
You is acting lak a giant, so mi mek you a midget
Wid di cocky wid di curve weh bend you up lak a digit
Cuz, if you a penicillin, mi ah diabetic
If you a anesthetic, mi ah di paramedic
From you land inna mi bed you get cocky til yah sick
Cah you neva come a my yard fi pussy -
A trick!"
-'Pon Dis'

"Don how you wicked so?
You get props from DJ Wayne, Colin Hinds and Liquid so
How di gun pon yah hip big so?
It mek bwoy haffi jump and prance lak Calypso"
-'So Me A Say' 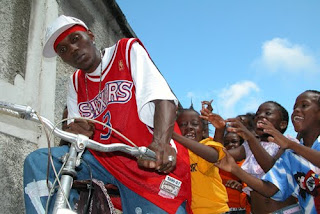