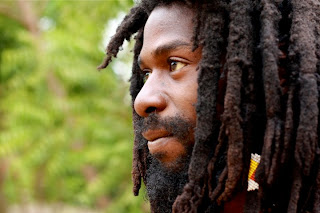 First up this week is a video we’ve been waiting for quite some time as, after an extremely well done ‘making of’ set, we FINALLY get the video for ‘Glory’, the first single from the new album from BIG Afrikan artist, Takana Zion, ”Rasta Government”. It’s no surprise that this tune was chosen as it is the highest profile track on the album given that it features Reggae superstar, Capleton. To make the link (and to also record some tunes for the album) the Guinea born Zion traveled to Jamaica and, in the process, came up with a very fitting which features both big performers. As far as that video, I would have had two ideas here and they hit on one of them. If you weren’t going to make this HUGE video traveling across the globe, then the other good idea would have been to keep things involved, but simple and that’s the route they’ve chosen. The clip isn’t spent ‘hid away’ in some performance setting with the obligatory shots, instead it’s up, active and involved on the streets, interacting with the people, which is what you would hope for a tune which speaks on the virtues and the might of His Imperial Majesty. Well done boys.
Video Rated: 4.5/5
Video - Song Link: 4.25/5

If I were going to give an award for . . . I don’t know ‘Videoist of The Year’ or something like such, certainly each and every year over the course of the last few, Tiwony would be a candidate for the title. The man just makes EXCELLENT clips, time and time again and he isn’t AT ALL slowing down with this gorgeous new piece for ‘Mon Continent’ from his (also) big new album, ”Cité Soleil”. BEAUTIFUL! For this clip, the chanter travels to Senegal to make the magic happen and it worked excellently on definitely one of the biggest videos of 2011. The song, itself, which one which speaks on unification and Afrikan unification amongst its daughters and sons across the world and the second and third and fourth shots we see here are of Afrikan flags of so many different nations flying high and it’s a similar shot (and we even see the later usage of graphics, to make the point even stronger) (and later we also see Caribbean flags as well) appearing throughout the video. I talk so much about tunes and lyrics making points but in this case (and in so many cases involving Tiwony’s videos), we get message making imagery and when you combine that with a powerful tune, the results are unforgettable.
Video Rated: 4.99999/5
Video - Song Link: 5/5
'Wife A Wife' By Lady Saw [Directed by Nordia Rose]

We go from a two royal-looking videos to bona fide Reggae/Dancehall royalty as Lady Saw brings us a video for her big cut on TJ’s heavy Star A Star Riddim. First of all, the song is big. Say what you will, but I’ll likely always feel that one of the biggest losses of the modern era of Dancehall is that when all of the newer sounding riddims . . . Committed suicide in terms of being actual Dancehall - We lost the prime years of Lady Saw, who was at her best over the less fucked up and more truly Dancehall-ish digital pieces. Fortunately the Star A Star is much closer to the latter than the former and she shines as only she can. As for the video, it’s pretty much what you might expect with Lady Saw taking on the night on her bike with her friends. I will say, however, that the highlight of the video is Saw herself. She looks fantastic
“If you ah pree -
Betta hide an dweet
If you no waan lose 32 teeth”
BOOM!
Video Rated: 3.5/5
Video - Song Link: 3/5

WONDERFULLY also placing a video this week is Achis Reggae/Earth favourite, Mr. Lloyd Brown from his latest release, the fine ”Cornerstone” album (I know you didn’t think that he was done, did you ????) - for the tune ‘There’s A Reward For Me’. Of course, the song is a remake of the original which was sung by the immortal Joe Higgs and for the video, Lloyd Brown chose to live spicy by shooting it on Grenada. I’m going to make an assumption here (because that’s just what I do) and try to say that, with as much scenery and serenity as you see here, what Brown is saying is that he’s showing you the “reward”. It would seem somewhat random to go to Grenada to shoot this video, but perhaps, as usual, Brown had a pretty good idea in mind and, perhaps, that idea comes well through. That’s the case, or, as usual, I’m just thinking entirely too much and should, instead, big him up for the nice video and the cameo by Tallpree.
Video Rated: 4.25/5
Video - Song Link: 4.5/5

‘Rèspèkté-w’ by Daly [Directed by Slas]

VERY interesting and nearly genius route Daly and company takes for the video for the first single from his forthcoming album, “Dalycious”, ‘Rèspèkté-w’. Unless I’m missing something (and I may be), Daly doesn’t actually make an appearance in his own video until well over three minutes have passed, instead to (literally), leave his tune in the hands of the people (hopefully, he paid them). The visual strength of what ultimately proves to be such a very good idea comes from the fact that he gets people from SO MANY different walks of life. From labourers, to vendors, to school girls, to thugs, drivers, footballers, homeless people, rich people, parents, babies, other artists . . . Everybody (Grandparents)! When you do something like that, it’s an alone-standing piece of imagery and big rèspèkté-w to him for it.
Video Rated: 4.5/5
Video - Song Link: 4.5/5

Finally, we end things this week on this most fucked up and nearly disturbing new clip from still hard charging Chezidek, ‘Secret Enemy’. As the title would suggest, there’s a story playing behind the lyrics on this one and that story quickly gets going with Chezidek as an observer (I believe he‘s actually relaying the story to his group of friends). Two childhood friends link with one doing far far better than the other and he takes in his old friend, gives him a place to live and even new clothes. To show his undying respect (not really) the loser friend attempts to flirt with his friend’s wife and takes notice that his old mate deals with extremely big money. So, of course, he calls in some of the less than classy individuals with whom he now spends his time (when his friend and his wife are SLEEPING IN THE SAME DAMN HOUSE) to rob the home and is, most thankfully, caught in the process. The thought here to be careful with whom you associate and it’s crystal clear after watching the clip.
Video Rated: 4.25/5
Video - Song Link: 5/5
Posted by Achis at 12:08 AM