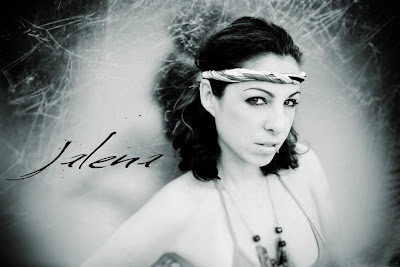 I've really been meaning to come back to this and given the fact that there is pretty much nothing going on these days which is exciting and I'm absolutely starving for something interesting to write about (send ideas (which I probably will not do) (actually, I probably won't even read them, but Bredz will) to AchisReggae@hotmail.com), I thought that now would be a pretty good time. 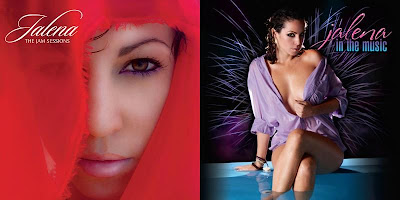 "The Jam Sessions" [2010] & "In The Music" [2011] by Jalena
Just before our last big break, we mentioned that Achis Reggae favourite and BVI Soca supernova, Jalena had released her sophomore set, the thoroughly entertaining "In The Music". Surprisingly we got a nice bit of messages in response to the post, most of which were positive (seriously, you may not like the style or the genre, but if you don't like Jalena, you are an alien) (biggup Skinny Fabulous) ("Mi head gone a space and it nah comin baaaaaaaaack") and hopefully some of those people picked up the album. So I'd been meaning to revisit one our favourite topics, Jalena, while it was still fresh on the mind - we just needed the proper opportunity and to remember! Fortunately, after listening through a great deal of random stuff - it was Jalena, herself, who provided the hint.

"Don’t you forget me"

That BIG tune across the OMG Riddim won't be found on Jalena's just as metabolically-challenged new album, but what you will find a whole heap of interesting moments - Exactly what we've come to expect from her over the past few years. Having now had the time to take in the full project - I have to say that, as expected, I love it. It is a superb release, with the only complaint being that it could've been a few tracks longer, but as I've said in the past, if she is to keep her current schedule of releasing an album every year, then I can deal with eight tracks (and Soca albums, in general, aren't generally very long anyway).
'Rester Avec Moi' ['Stay With Me']
My favourite moment does remain the intoxicating 'Come Baby' and that song, at least for me, will likely always stand favourable to just about anything Jalena does, but I was most interested in sinking my brain residue fully into her Zouk-ified debut, 'Rester Avec Moi'. BOOM! That thing is MIGHTY! I'm almost never correct when I say shit like this, but that song is a hit to my opinion - if given the proper opportunity, it would have flames behind it and I think it could make a sizable dent in the world of Zouk (TRACE!). On top of that, with an album per year from Jalena . . . I don't know maybe in 2013-2014 we could get a full Zouk album from Jalena (and could you imagine a remix of this track with . . . Lady Sweety!)??? Ultimately I think she may have eyes for a more of a 'mainstream' platform, but to ignore the fact that she'd need not stretch herself very much at all (maybe learn some Kreyol) and potentially have a big career doing Zouk probably isn't the smartest thing to do - and I'm not a very intelligent person (AT ALL), so it should be completely obvious at this point. However, regardless of where she does eventually take it, hopefully Jalena doesn't ignore that Zouk: She does very well.
So that's it! No more excuses. Unless you want others pointing at you and laughing and shit - like in random places - You'll definitely pick up Jalena's brand new album "In The Music".
'In Meh System'
And you know what! You should probably also get her 2010 album too, "The Jam Sessions". Twelve tracks of absolute ear candy. Highlights included 'Down De Road', 'Bumpa', 'Do Fuh Do' w/Daria, 'Wuk Meh', 'In Da VI', 'Coming To Jam' and the MASSIVE 'In Meh System'. The entire album was a big highlight! And don't even just take my word for it - I happened to find this STUNNINGLY BRILLIANT AND AMAZING REVIEW floating around online, so have a read and get some Jalena in your life.
Posted by Achis at 10:35 PM