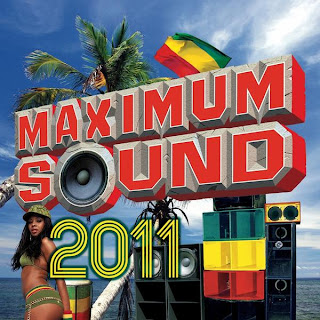 "Maximum Sound 2011" [Maximum Sound]
First up this week is a truly BIG release coming from out of the UK courtesy of Frenchie and company at the mighty Maximum Sound, "Maximum Sound 2011", which is a catch-up to the vibes from the label of this year. MS well has a good reputation when it comes to compilations as, at least to my opinion, in both editions of "Bobo Revolution", they've pushed two of the better comps from the turn of the century and here, the label seems poised to revisit that line of quality. In its eighteen tracks. "Maximum Sound 2011" features a mountain of big names - Sizzla Kalonji, Tarrus Riley (big tune - 'Rebel'), Luciano, Bounty Killer, Assassin, Busy Signal (another mad song, 'Uniform Bad Bwoy'), Ce'Cile, Mr. Vegas, Konshens, I-Octane, Million Stylez, Yami Bolo and others offer LARGE tunes over this primarily old-school Dancehall and Roots release with a very modern spin. We haven't stuck our teeth into this one fully just yet, but you might be looking at one of the best compilations of 2011 right here.
Digital 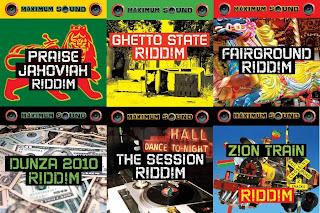 
'Africa We're From' by Natty King [Ashanti Warrior Riddim]
Besides releasing the big and aforementioned compilation, Maximum Sound has, essentially - like so many labels are doing lately, emptied its catalog through the digital medium and, suddenly, digital Reggae shelves have gotten just a bit 'happier' because of it. MS is the type of label that have definitely done great things, but you may not be aware of exactly what. So! Surely you should pay attention to the riddim releases in particular. They have been massive and even though I'm an overthinker, even I won't writer out all they've done, however, my personal favourites do include the Jah Powers Riddim, the Praise Jahoviah, the Rebellion 2010 and my absolute favourite composition from Maximum Sound has likely been the Ashanti Warrior. All of these and probably a dozen more (including the Desert Storm which features a WICKED old tune from Sean Paul, 'Back Off') are waiting for you to exercise some common sense and have a closer look and listen. Favourites of the label such as Anthony B, Jah Mason, Luciano, Lukie D and others headline the pack.
Digital 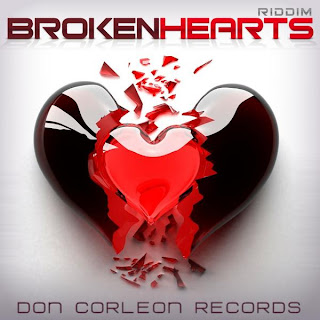 
Riddim Mix
This riddim may very well have been released back in the 1980's, but I always meant to mention it and we never got around to doing it. The Broken Hearts Riddim may just be one of the best compositions ace producer, Don Corleon has EVER done. It was absolutely BEAUTIFUL in every way and while I don't think that it would, ultimately, generate the type of response that it deserved, but everyone who really tuned it in knew exactly how powerful it was. Shining here were the DCR regulars apart from Ce'Cile, Pressure Busspipe, Tarrus Riley, Kartel, Ikaya and Da Professor, and also Richie Spice and I-Octane.
Digital 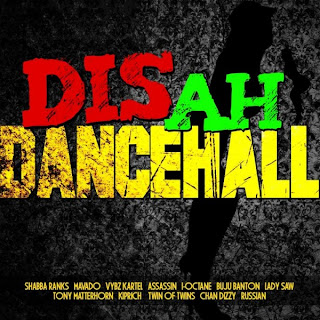 
'Talk How Mi Feel' by Agent Sasco
With real Dancehall pretty much a dinosaur these days, the Dancehall compilation which isn't a riddim set is even more a victim of time, but credit goes where it goes. Digital Link International Inc. deserves some shine now for having dropped this decent effort, "Dis Ah Dancehall". This album is full of some of the more Dancehall specific popular tunes - What I mean is that if you follow the genre, nothing here will probably be so amazingly unattainable to you, but it isn't necessary "Reggae Gold" either. It does, however, become very useful for more casual fans of the genre who probably aren't (reading this right now) (or right now) paying as consistent of an attention. The usual faces of Mavado, Kartel, Agent Sasco and I-Octane headline, with more than formidable (and downright legendary in some cases) twists of Shabba, Buju Banton, Lady Saw (those cases), Kiprich and others rounding out the album.
Digital 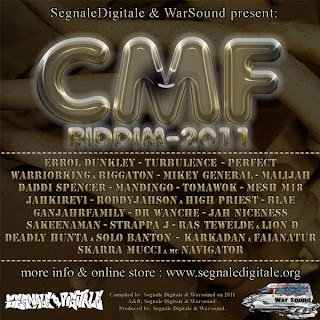 CMF Riddim [Segnale Digitale/WarSound]
We head back to the ultra-active Reggae scene of Italy for probably one of the best Dancehall sets that I've heard in 2011, the CMF Riddim from Segnale Digitale & WarSound (who?). MAD! This one sat in the email for a few days before Bredz sent a message saying "You might want to hear this one". In the 'right' hands, this one is magical and most of the names here with which I'm familiar are very correct with the CMF. Along with more than a few names COMPLETELY foreign to my eyes and brain, check tunes from the likes of Perfect, Turbulence, a surprising Mikey General and Errol Dunkley (okay, so maybe Dunkley's tune isn't amazing), Malijah and a combination between Warrior King & Biggaton, 'Always'. And speaking of combinations, they're all around with the Italian link, Ras Tewelde & Lion D, Skarramucci & MC Navigator as well as Deadly Hunter alongside Solo Banton whose SCATHING 'Can't Dead' might just be the single best track on the whole of the CMF Riddim.
Digital
{Segnale Digitale} 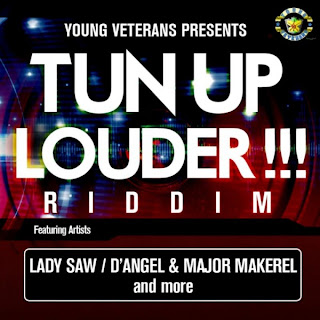 
Riddim Mix
Next we have the 'sequel' to a very fun release from Young Veterans, the Tun Up Louder Riddim. Earlier they sprouted the Tun Up Loud and here it is again. As far as I can tell (which means that I'm almost certainly wrong), original and sequel are the same composition, but here we have another batch (biggup Batch) of artists. With Capleton, Perfect, Macka Diamond, Fantan Mojah and Munga, the first definitely had MORE big names, but Lady Saw (who shines on this old(er) school riddim) and D'Angel lead a nice few names on the Tun Louder which includes Ninja Kid, Bitta Blood and (I'm not making that joke!) (even though I do want to) Major Mackerel.
Digital 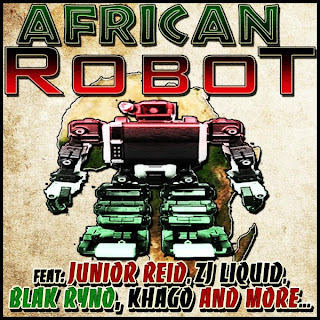 The African Robot Riddim [Unknown People Records/Zojak Worldwide]
And lastly in stores this week is the full set of a high powered piece which reached just a few months back, the interestingly title African Robot Riddim from Unknown People Records. I'm not very high on this one, as a riddim, and I don't think I ever was, but I count it, essentially, as an overachiever of sorts because it does serve as the backdrop for a better group of tunes than I assumed it would. The best of them all remains 'So High' from the angriest man in the world, [Ein]Stein. The Bloods also impress greatly with 'Tek It To Dem', as do several others.
Digital
Coming Soon 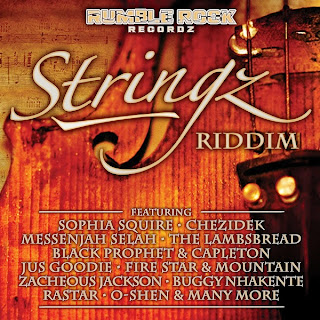 
Riddim Mix
Though it seems like several billions of years ago when we dealt with our formal introduction to Hawaiian label, Rumble Rock Recordz, it was just back in April when they dropped the Step By Step Riddim. Well, just about six months later and they're back with the next 'step, the Stringz Riddim. LOVELY! This colourful R&B tinged piece picks up right where its predecessor left off in terms of its direction. Once again, RRR have linked together a mighty and VARIED roster of vocalists and they've really done well for themselves! Capleton's is the biggest name on a list which also features Chezidek, Achis Reggae favourites Messenjah Selah and even Buggy Nhakente from out of Barbados, Sophia Squire, The Lambsbread, Zacheous Jackson and others. If we stick around long enough (like all of next week), I may even slap a review on this one, but even if I don't be sure to grab it up when it reaches.
Releases on October 18
Digital 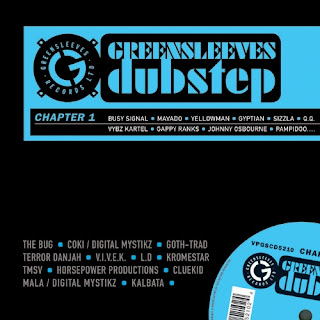 "Greensleeves Dubstep: Chapter 1" [Greensleeves Records]
I don't know exactly what Dubstep is, but I have seen it discussed at great length and detail and apparently so have the people at VP/Greensleeves and they've found something else to do with their catalog - Dubstepping it out. That's the basis of "Greensleeves Dubstep: Chapter 1" which features well recognizable and often legendary tunes from Reggae/Dancehall remixed in Dubstep. I've actually heard this entire thing now and . . . Yeah, I don't exactly know what to make of it, but I think that with rising popularity of this style, I'll probably be in the great minority there. And feel free to edit this Bredz, if you like.
Releases on October 25
CD + Digital 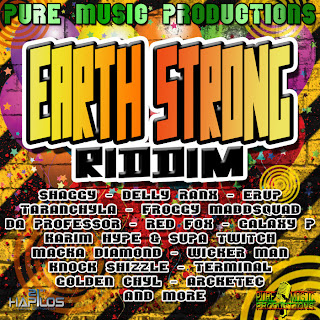 The Earth Strong Riddim [Pure Music Productions]
Quietly, to some degree, veteran Dancehall DJ, Delly Ranx and his Pure Music Productions have been flaming as of late and the heat continues with their latest set, the Earth Strong Riddim. Just taking this one as it is, it is a LOVELY authentic Dancehall riddim and it's the type which is just so fun, at least to my ears, that you can really do anything with it. The tune on it doesn't have to be THAT impressive to make it fun and there're nineteen tracks here, certainly I don't like all of them (I probably don't even like MOST of them, to be blunt), but it's just a fun time and with Delly, Shaggy, Erup, Macka Diamond, Da Professor, it surely isn't completely devoid of functioning skill.

Releases on October 14
Digital
{Note: Delly and PMP almost ALWAYS release big tunes on their riddims as singles, so if you're looking for something in particular on this riddim, it may just come later on its own} 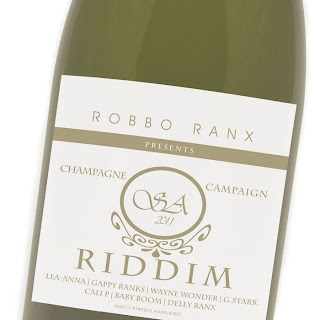 The Champagne Campaign Riddim [Streets Amplified]
Quickly - Here we have the uptempo Champagne Campaign Riddim which comes from Streets Amplified & THE Robbo Ranx (biggup Youstice) out of the UK. This is a fun riddim as well and it births pretty nice tunes from bros. Ranx, Gappy & Delly (solos) (the former dominates the riddim to my opinion), the impressive G Starr, Cali-P and a very classy Wayne Wonder (this got a lot better when I saw his name involved). Still, you'll also want to keep an eye on (literally, she is a CUTIE!) the up and coming Lea-Anna (she almost looks like a younger version of Saffire). 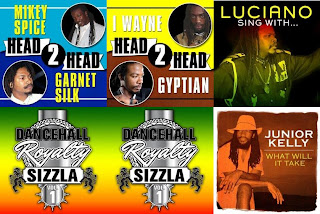 "More Shit" [Penitentiary Records]
And finally this week - Just when you thought it was safe and just when you thought they were gone, the madness continues with forthcoming issues from the roach-like determined Penitentiary Records. They're releasing BRAND NEW and CLASSIC albums from the likes of Sizzla, Capleton, Luciano, Junior Kelly and more . . . Probably! World class compilations featuring some of the biggest stars of Reggae today and from years gone by! And more stuff . . . that I can't write about without feeling nauseous. This shit will be floated on digital services around the world and people will buy it and they'll be happy because it is good music. But (!) this most fucked up of returns guarantees that they'll be back and they'll probably be back before the end of the year with more "NEW" shit which you should avoid because if you REALLY care about it, you already own it. More shit pieced together from someone else's album - In stores soon!

This medium is difficult to convey sarcasm in, so if you are a newer fan who stumbled upon this in the year 2014 or something. Don't buy this rubbish. EVER!