Reggae, being the best music in the entire world, is able to appreciated in a large variety of different ways. You can find a song for almost any situation and find almost any situation and setting in which to enjoy it. Still, I'll maintain that the absolute best way to appreciate and LOVE Reggae is live and direct. The genre is absolutely one of the most 'visual' and 'colourful' in the world and even when the music itself may not appear to be so. We have some of the greatest and most energetic performers to be found anywhere and, simultaneously, some of the most experienced and dazzling as well. Despite this being the case (and obviously so), there has been a great dearth of live recordings to make it to albums over the years from modern artists. While elders such as Bob Marley & The Wailers, Peter Tosh, Burning Spear and others have so many to their credit, today with acts who also have extremely large musical catalogs, that is not the case, but there are some! Thus, I submit for your approval (or disapproval, what do I care?) (is disapproval really a word?) (it is), The Ten Best Live Reggae Albums of the Modern Era - Live & Direct.
{Note: Only modern artists are featured here}
{Note 2: The only albums eligible for consideration feature one main act}
{Note 3: Obviously #1 deserves some type of condition, but I don't feel like wording it} 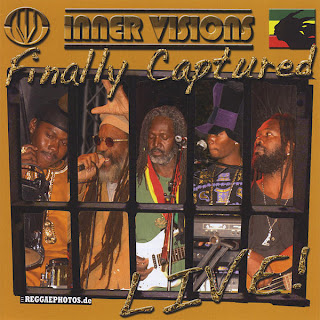 #10. "Finally Captured" by Inner Visions [Petrogylph Music - 2008]
It took me quite awhile in putting this list together and I'm happy that it did because had I went on it as it originally existed, it would have been devoid of this very nice set which ranks #10, "Finally Captured" by Inner Visions from out of St, John. In terms of pure performance, this is one of the best entires here, in fact, I would even rank it higher if it weren't for the fact that it was SO good. Ehhh? This album almost sounded like a studio set and although you did hear crowd response and 'movement' and other things typical in a life performance, it almost sounded like a presentation of music, rather than a performance. Still, whatever it was, it was well done and worthy of a spot here. 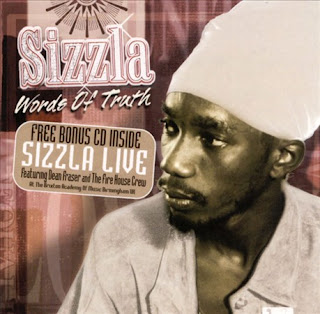 #9. "Words of Truth" [Disc 2] by Sizzla Kalonji [VP Records - 2000]
By no means was it a great album (or even kind of close to it), but "Words of Truth" is definitely remembered as one of (and maybe the first) the really FUN albums of the obese catalog of Sizzla Kalonji. Packaged with a decent first disc, the main attraction was a very random live set tacked on by VP Records which featured clips of a (very well recorded) performance at Brixton Academy in the UK. It wasn't the greatest but, again, it was just a very good time had as Kalonji rolled through hits such as 'Praise Ye Jah', 'One Away', 'Mek Dem Secure', 'Black Woman & Child' and others. The not too surprising pinnacle came when he presented the then new 'Humble Thought' which mashed up Brixton Academy. A more than enjoyable set more than a decade on. 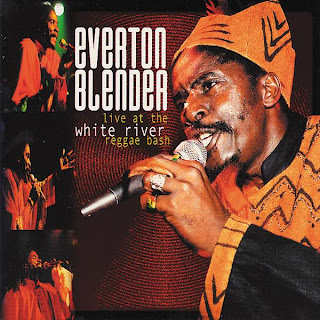 #8. "Everton Blender: Live At the White River Reggae Bash" [Heartbeat Records - 2000]
The venerable and ultra-classy Everton Blender could have two pieces on this list but ultimately we chose to go with "Live At the White River Reggae Bash" because of just how wonderfully done it was. Along with covering two different shows (one being the title and the other being a stop along the Blender's 1999 Rootsman Credential Tour), the release served up excellent live renditions of favourites such as 'Family Man', 'Create A Sound', 'Blend Dem' and of course, 'Lift Up Your Head'. Top notch sonics also highlighted this delightful album which probably should've gotten a sequel by this point, but as it was - It was nearly golden. 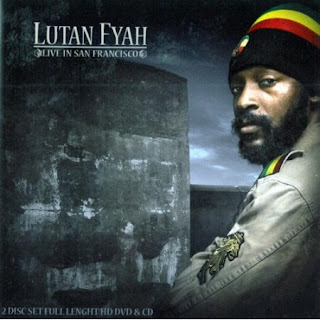 #7. "Lutan Fyah: Live In San Francisco" [2B1 Multimedia - 2008]
I can remember seeing "Lutan Fyah: Live In San Francisco" pop up and just being SO damn pleased by its actual existence. Lutan Fyah wouldn't necessarily be someone you would think to have a live album under his lot, despite him being (at least in my opinion) a very underrated performer, but he's one of my personal favourites and that he did was BIG for me (more on that, exactly, in #6). It also helped when I saw that included were tunes such as 'Mightier Than Them All', 'Bits & Pieces', 'Screaming For the Poor' (guitar solo MAD) and even a cut of 'Rasta Still Deh Bout' (sans Josie Mel). More still, when it was all over, the album carried a complete bonus track, 'People Cry'. 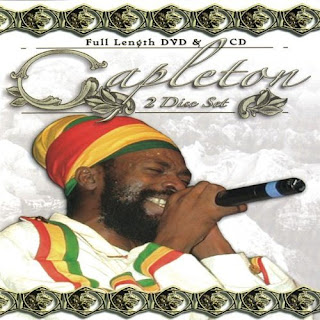 #6. "Capleton: Live In San Francisco" [2B1 Multimedia - 2006]
They're gone now, but definitely credit has to go to 2B1 who made their names largely on the basis of being a company who specialized in doing live Reggae albums and their 'life' extended to the new generation. Besides Lutan Fyah, there were albums from the aforementioned Everton Blender, Junior Kelly (w/Mikey General), Lady Saw, Luciano and even I Wayne and Chuck Fenda when they wrapped up (and if I recall correctly, Ky-Mani Marley and Turbulence were forthcoming). Say what you will about them (and many have), but they were just so USEFUL. Unshockingly they did their finest when they released a set from the devastating Capleton who, even when clearly not at his best, is still leaps ahead of many of his most talented peers. 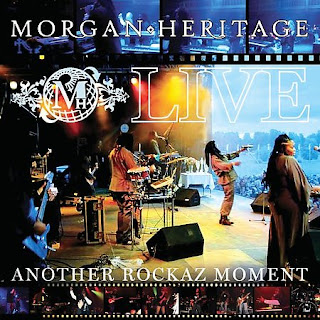 #5. "Live: Another Rockaz Moment" by Morgan Heritage [VP Records - 2006]
It was somewhere around HERE when I began to take a healthy notice of the Morgan Heritage camp as actual artists. Prior to "Another Rockaz Moment", I held them as definitely an entity to be respected, but someone who really just made this type of 'folk-ish' sounding material which was a few steps out of range of my taste, but listening to this very VIVID album really made me to take another listen to some of their older material and while I'm still not the biggest of MH fans, at all, I do have a healthier opinion of them and it is largely due to this project. They've had other live releases (or at least one), but for me, this was far and away their finest "moment". Excellent. 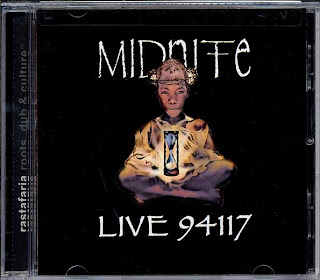 #4. "Live 94117" by Midnite [Rastafaria Recordings - 2008]
Falling in line with #10 on this list, expectedly in this case, is Midnite who really captured a great deal of their extremely loyal fanbase a few years back (not hard to do for them) when they dropped "Live 94117". The crowd response on the album was very very good, but the star attraction here, for me, was the downright HYPNOTIC vibe they pushed in the process. The energy also steadily picked up (and sometimes did so in the same tune) (hear 'Proceed') and by the end, after nearly eighty minutes, you're almost stuck wondering why they do one of these every year. Also, although it did get quite a bit of reaction - It was probably an even stronger album than most people gave it credit for being. 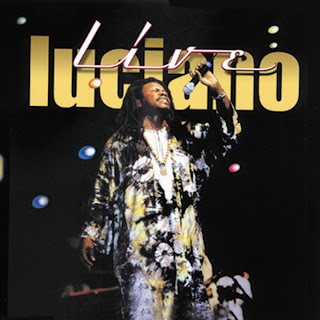 #3. "Live!" by Luciano [VP Records - 2000]
Luciano also rests on three or four different albums which could have been on this list, but in his case there's not really a comprehensive question to be formed as to which one reigned supreme. "Live!" was every bit as STERLING as you could have imagined on a live set from The Messenjah - increasingly building itself up on big tunes and reaching its heights in its latter stages. It was also very FUN and when you combined that level of class, no matter how expected, with something which kept heads rocking and fans interested throughout, you really couldn't go wrong and had a world class project. 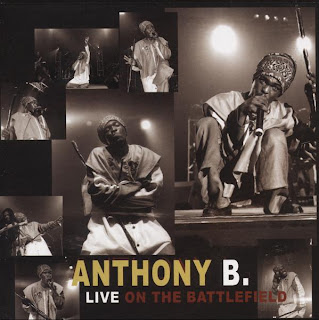 #2. "Live On The Battlefield" by Anthony B [Nocturne - 2001]
Anthony B spent nearly two hours DESTROYING a stage in Toulouse, France and someone (bless them!) was smart enough to record it (audio and visually) and sell it to people like you and me as "Live On The Battlefield" . In doing so, they produced arguably the greatest Live album of the modern era and, from the sound of it, made a great deal of people on hand very happy they went out that night. I don't listen to this one nearly as much as I should, but when the idea for this list struck in, I was sure to include it and do so very highly (duh). If you like this kind of album (shame on you for reading all of this shit if you don't), then it is mandatory listening. He goes through big hits and not so big hits and just has a GREAT time on the stage which really comes through in this LANDMARK release which would have been #1 if I had even the slightest bit of journalistic integrity, AT ALL. 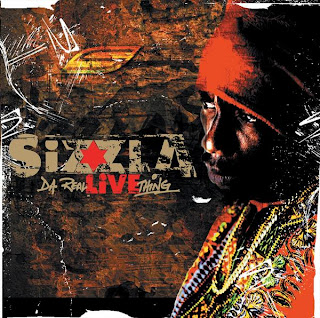 Was there any doubt??? Three years after dropping an album which would go on to mash up anything in its way and take no prisoners, Sizzla Kalonji and VP Records released another album, seemingly almost in CELEBRATION of the original project and gave it a second life which it wasn't even in need of at the time. "Da Real Thing" added two songs and a mix of a hit and became "Da Real Live Thing" in 2005. Also added was a DVD performance featuring Sizzla burning a craterous and cavernous hole in Soca Mo . . . VP's 25th Anniversary show in Miami, Florida. MADNESS!
Posted by Achis at 6:14 PM