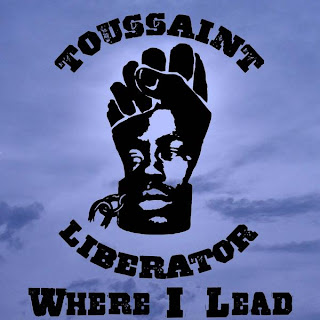 "Where I Lead" by Toussaint (EP) [I Dwell Records/Gatorwood Records]

That didn't take very long. First up this week is something which legitimately SHOCKED me when Bredz first told me about it - it's a brand new album from Achis Reggae favourite, Toussaint. Of course, you know him from having dropped one of the most impressive sets from 2012, the magical "Black Gold" and it really doesn't seem like that occurred too long ago, perhaps because we've basically been talking about the album from ever since. So you know if he were to do something like . . . Do another album, that would interest me a lot and that's where "Where I Lead" comes in. I Grade Records, who did the first album, isn't here and instead, Toussaint links with I Dwell Records and Gatorwood. So much here is interesting, not the least of which is the fact that Toussaint chose to continue to do his brand of 'Soul Roots', which means that people like you and I get to continue to enjoy his output and he stays in the Reggae 'loop', instead of returning to his more soulful origins. ALSO really standing out is 'I Blaze', a track which links the singer with the mighty Mikey General - a song I cannot wait to hear. So expect a full and devastatingly long review when we get our digital paws on it. BOOM! 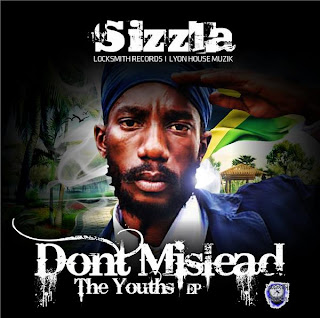 Moments like these remind me that . . . I have two Sizzla reviews to write. I'd noticed this release some time ago and I think that I thought it was a single which, although definitely still worthy of some attention, I snot as crucial. But I was wrong and the legendary chanter has linked up with Locksmith Records from out of New York to push "Don't Mislead The Youths" which is one of the two first BIG EP releases of 2010 [look up down for the other] [I hope you didn't just physically turn your head down and look towards the floor] [please leave a comment if you did] [I think people like you are amazing]. It's kind of Hip-Hoppish, but not too much so in this case and, it's Sizzla so check it out. Big title track and another piece on the same riddim, 'Ganja'. 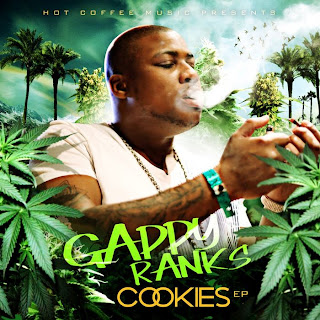 With "The Best Is" and "Rising Out Of The Ghetto", Gappy Ranks has always minded to keep his name current on the digital circuit via releasing excellent EP's and he did that again for 2012 back in February with probably his best drop yet, the  ganja personified "Cookies". Six tracks with a similar driving force, this piece has gotten quite a bit of attention and justly so - It's excellent! Two major highlights in particular to my ears, 'Maddest Ting' and the EAR CRACK that is 'Da Herbs Deh', but the entire set is very well done. Pick it up today if you haven't already. 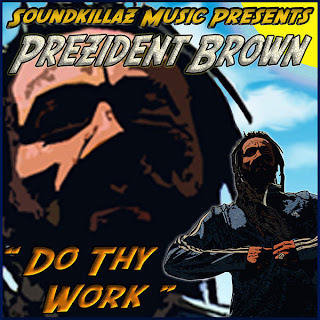 "Do Thy Work" by Prezident Brown (EP) [Soundkillaz]

While I've never been the biggest fan of Prezident Brown's, I do love to give credit where it is due and it's well due in the case of his own latest EP set, "Do Thy Work" for the Soundkillaz. This piece is essentially a three set project with different mixes stretching it out to seven (including Nyahbinghi cuts of all three songs). I'd heard a song by the name of 'Do Thy Work' a while back and while I didn't know anything else about it (I assumed it was Prezident Brown), it was very good and here's the work behind it. A very solid set from the always dependable and capable veteran. 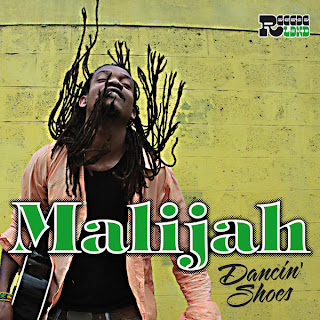 Next in is what may just turn out to be a real sleeper for 2012, it's the extremely talented vocalist, Malijah with his debut album (I THINK), "Dancin' Shoes". For the project, the energetic and colourful singer has linked with ReggaeLand from out of Spain and what you end up having is a piece which, although it won't get an 'album of the year' type of consideration, it definitely is going to have quite a nice following (if it hasn't already), because it's just SOLID from beginning to end. In its thirteen tracks, it also gives a nice mix of the artist who has been demonstrating a vast amount of subtle versatility for his entire career. Nice album. 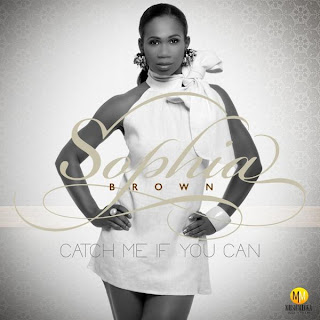 'Catch Me If You Can'

Cool singer Sophia Brown is up next with her much about talked brand new release, "Catch Me If You Can". Over the past couple of years or so Brown has gotten a great deal of attention and it's been well deserved as she's already carved out a very impressive career for herself which now culminates in a big album. This is definitely one for the fans of the modern Lover's Rock, for the most part and Brown has been adding to the subgenre some of its biggest pieces as of late. None get bigger than the title track for this album and several other selections here, including 'Relationships', which features Hezron. Intent on showing some diversity and versatility, Brown also offers tunes such as 'Mamma Africa' and 'Poverty'. The latter features her alongside the legendary Luciano. 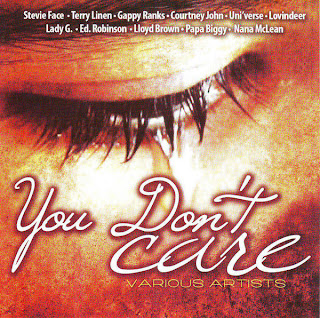 
We always keep an eye out for the wonderful works of the people at Joe Frasier Records and they recently jumped up with yet another stellar old school/Lover's Rock compilation set. This one is a remake of the old You Don't Care riddim and, as usual, it's fine material. Big names are all around this release as the remake features the likes of Terry Linen, Stevie Face, Courtney John, Lady G, Lovindeer, Gappy Ranks, Ed Robinson and Lloyd Brown (who we also have to deal with pretty soon). More big material from the big women and men at Joe Frasier Records. 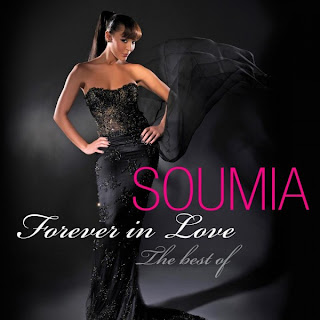 "Forever In Love: The Best of Soumia" [Sushiraw]

I'm always trying to find something new and interesting going on in the satiny world of Zouk and particularly in the absence of some of my favourites doing work (although Kénédy does have a new big tune with a video where she's without clothing, laying in the back of a truck) (I digress). And while what we have here may not qualify as "NEW" it's definitely interesting as French singer, Soumia, chimes in with a big 'Best of' set, "Forever In Love". The release comes via Sushiraw, the label of famed singer, Kaysha, who also joins on the album and reportedly marks the lovely singer's first decade of music. Guestspots from the still fire-breathing Kalash (who recently enjoyed yet another re-releasing of his ultra successful debut album) and also Daddy Mory round out twenty of the most well known pieces of Soumia's extremely photogenic career. A DVD featuring videos is also included in the physical set. 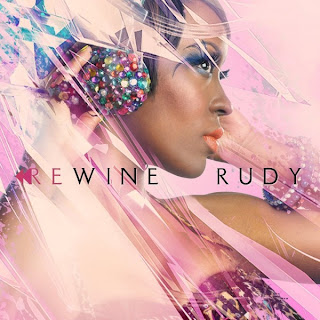 VI Soca just doesn't get its fair share of attention, despite the fact that there're more than a few big names on the scene and while we continue to wait for the latest release from my personal favourite from out of the BVI, the USVI's finest, Rudy, is standing up with her own big creation, "Rewine". This is a good album! Rudy's a name which certainly isn't new to me, but I don't really listen to her a great deal, so most of it is new to me and there's a HILARIOUS tune here, with typical old school Soca/Calypso humour that you need to hear, 'Dung Deh'. Soca stars Machel Montano and Jamesy P also feature on separate tunes as well. 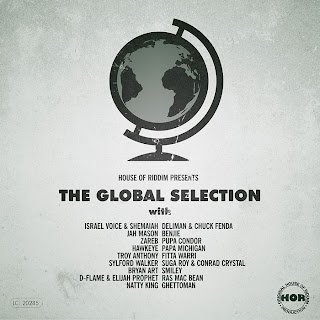 "The Global Selection" [House of Riddim]


Anytime the big boys at House of Riddim from out of Austria jump up, you really have to pay attention to their work because when they do, they're oft to do things like what we have in the case of their absolutely LOADED new release for their Global Riddim. First of all, the piece itself is a glowing brand of powerful (but smooth) modern Roots Reggae as you can, thankfully, tell via the clean version of the set attached to the end of the album. And on the preceding eighteen vocal tracks, HOR have assembled one of the nicest roster of vocalists in recent memory. Jah Mason, Chuck Fenda, Natty King, Zareb, Papa Michigan, Smiley, Ras Mac Bean and Bryan Art are just some of the big names on the project which is definitely already in the running for Riddim album of the year. 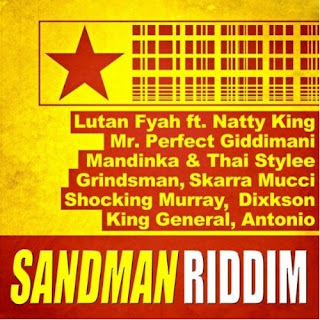 
Also impressing with a big new riddim as of late is Weedy G Soundforce from out of Switzerland who bring forth their own wicked creation, the Sandman Riddim. While it may not bring in the heavy hitters like the global, the Sandman does manage to more than hold its own. Surely that has a lot to do with a HUGE combination, 'What A World', which features two of my personal favourites, Lutan Fyah and Natty King. Perfect also joins as do Shocking Murray, Skarra Mucci, a returning Grindsman and others. 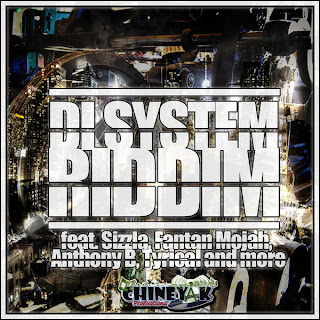 
Another large cache of big names can be found touching down on the official album release for Chiney K's pounding riddim, Di System, oh and the riddim itself is pretty good also. Sizzla, Anthony B, Turbulence, Fantan Mojah, Jimmy Riley, Lutan Fyah, Ginjah, Tyrical, MILITARY MAN and even Cutty Ranks and Jigsy King are only a few of the names to take Di System for a run and the riddim itself also maintains the pace. Perfect for the digital set - you can pick and choose - but to my opinion, it's Tyrical, Sizzla and one or two others who set the course. Enjoy. 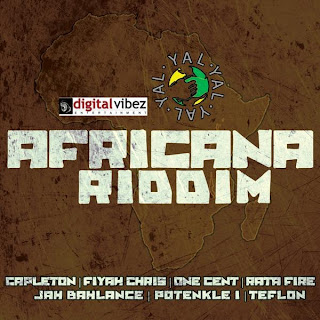 Teflon's Yard A Love links up with Digital Vibez Entertainment (and the fine people at Zojak Worldwide) to push the cool Africana Riddim. Although you won't find it stuffed with the biggest names, what you will find are tunes from Capleton and the producer book-ending an impressive group of new and up and comers. Of that lot, definitely most impressive are Potenkle I and the wicked I Rolla, a name to keep an eye on right now. 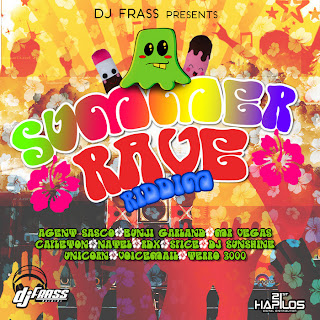 People like Agent Sasco, Spice, Capleton, Vegas and even Bunji Garlin highlight the Summer Rave Riddim from DJ Frass. I'm not thrilled with this one, however, but I thought the cover was cool so we threw it in. Check it out for yourself. 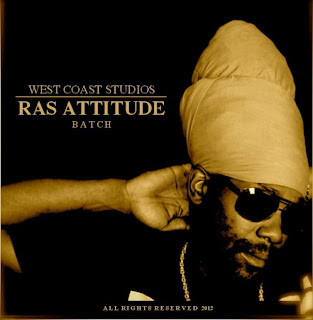 
And lastly this week is a new single which I'm really looking forward to getting my hands on, 'Vampire Slayer', which links one of the greatest duos in Reggae music today, Ras Attitude and Batch. I can't say much about this one, because I've yet to hear the entire piece, but is there anyway that this one CANNOT be a winner?

Digital
Posted by Achis at 9:43 PM