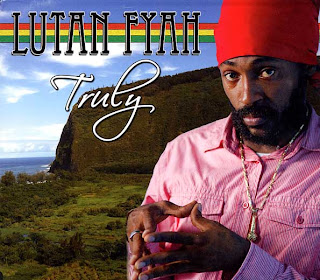 Okay so, biggup a friend of ours, Dale Cooper [everyone check out The Sizzla Project], who sent us a link this morning basically saying that he had noticed two albums that he didn't know anything about, that had just popped up in his face and as it turns out, I didn't know anything about them either and Bredz was . . . Still in bed at the time (biggup studying hard) (or drinking) (whichever you prefer) {Note: I actually got to wake Bredz up to make this nice and presentable to actually be read, I cannot even begin to tell you how many times that man has woke us up by ringing us at half o'clock in the morning} (now watch him cut it out!). They both came via someone called OneDrop Productions, which I guess is a label from out of California. The first of them (I don't know how I figured out which was first) was "Truly" by Lutan Fyah! Just a random new and apparently legitimate Lutan Fyah album on a Friday! Looking at it and listening through the clips briefly, it sounds pretty good! Making an appearance alongside the chanter are NiyoRah, Webbie and some guy called Attitude or something like that. I've got a pretty good feeling about this one already and I wouldn't be surprised at all if it's even better than that and I'm going to assume that it is. Beat me to a listen and pick it up today. 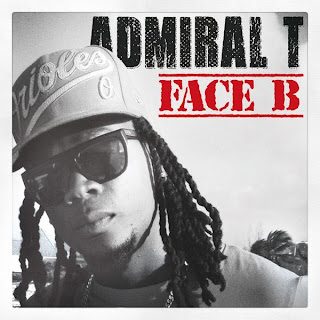 Breaking up the OneDrop Productions party today is something I should have mentioned last time - overly-gifted Gwada Dancehall ace, Admiral T, just threw out his latest set and his first from 2010's fantastic "Instinct Admiral" set ["phenno no, phenomenal. phenno no, phenomenal!"], "Face B" from the magic workers at Don's Music. This album I have and have for a minute now - IT'S VERY GOOD. The Admiral brings the typical madness and skill implanted on a project which comes in at a staggering twenty-three [!] tracks [no interludes] and features guest spots from the likes of martian wicked former protégé, Saïk, Saël, Kaf Malbar, Young Chang MC, Daly, Gyptian & Gappy Ranks (on the same track) and others. The first single, the Riga produced 'Gangsta' was fucking destructive and headlines an album which I hoped to review early next week, but it may have just gotten bumped until after the break. Nevertheless, I'm telling you in about 200 words that it is good (instead of 2800). It's good - go get it. 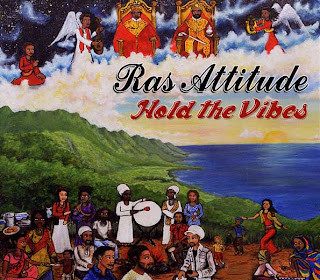 And finally is the second album of the OneDrop Productions shock out today as Ras Attitude returns with his very first LP from 2009's (has it been that long???) mighty "I-Meditation") (still a very strong album today) with "Hold The Vibes". Obviously the same details apply here which did to "Truly", but as an addition, check 'We Got The Handle' which features a returning (and mad as hell apparently) Ancient King, Lutan Fyah returns the favour (on the same song) and something very interesting: On the back cover is a logo for Sound V.I.Zion. What does that mean? Usually when you see that, it means that Ras Batch produced, at least, the vast majority of what you're going to hear. We're going on break next week, but hopefully I can get my hands and a review on at least one of these obviously VERY strong releases before we go.

[Biggup yourself Dale Cooper!]
Posted by Achis at 1:42 PM