'Still In Awe': A review of "Be Strong" by Midnite 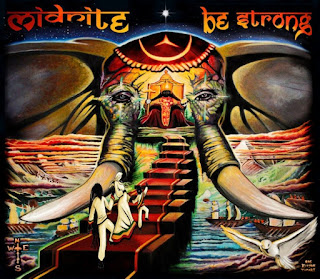 I do have to say something about the album's cover. You already know how Midnite's album covers usually are and this one is no exception, technically, but following the GORGEOUSLY chaotic cover of the "In Awe" album, which was one of their best in my opinion - this one, arguably, tops it with a simpler setting. The artiste in question, Ras Elijah Tafari, also did most of the other Midnite albums for the label, and his most brilliant work is also seen on the cover of the recently released "Songs Fa Jah" album by Ras Abja from the aforementioned Higher Bound Productions (and he also did the "Current" album by Midnite & Mystic Vision from a few years back). So biggup the superstar for his art which, just like the music it wraps, continues to get better and better each time you encounter it. Specifically, you could say the same of the very first tune on 'the new Midnite album' from Fifth Son Records, "Be Strong", which is its title and, at least to my opinion, greatest track. SPECTACULAR! There is an amazing sound on this tune, which, I guess, is an mbira instrument (played by one Matthew Wasowski, who also plays guitars on the tune and lends a variety of sounds to six of the album's ten tracks) and it helps to make for an unforgettable riddim. And despite being the single shortest piece on the album (by nearly a minute), Benjamin utilizes this brief moment to push a 'quickly' dazzlingly inspirational message. In typical Vaughn Benjamin style, he does not take the standard course and, instead, definitely makes the listener work for what he is saying, but the journey to comprehension in this case is a joyous one! Next up is a piece which I was well interested in hearing when I initially saw the tracklist of "Be Strong", 'Dandy Lion'.


"Don't expect these people to stay just so in ignorance
They got it inside - they like the hippest of pa-tan-tan-tan
Out in a field of wild dandelion
CHILDREN RUNNING FOR NOTHING BUT THE JOY OF CREATION
Ambivalent to everything but dem youth and strong
And all that is the future of ambition upon the land
If dem ahgo see it as self-sufficient and self-dependent
If dem ahgo like dem food well-seasoned or bland
If dem ahgo like codependent conglomeration
If dem ahgo walk as isolationists - strong
Financial index show di depth of the interrelations
Watch man fiscal - what a exploiter land
What if your compromise is only human-advance?
The ages will remember and give such stance
But a infrastructure roads and bridges and education"


What I took from this one is Benjamin's desire for the world to be more innocent and oblivious to certain very complicated things in daily life ["don't play with politics on the land"] and to just ENJOY the freer aspects of the world. Again, you know he'd never just come out and say it and the way he delivers his thoughts, once again, is wholly brilliant on one of the finest tunes here and check how the riddim, beautifully, continues on well after the vocals have ceased (one Chief Sanchez on the horn). The heavily hypnotic praising piece, 'Jah Know', is in next. This thing, from beginning to end, is Prof. Vaughn Benjamin giving a huge historical dissertation on His Imperial Majesty. If you can appreciate such a tune, then this album is for you in my opinion - as it is moments like these where the chanter does something which ONLY he can while continuing to demand your full attention. The absolutely unforgiving 'With Regret', which comes next, is another of the best songs on the whole of "Be Strong". When I first heard it, I had it as this composition which seemed as if it would continue to pick up further as it went along and as I came back to hear it more times. The sun does even shine on a dog's ass occasionally and, for once, I was correct. In its duration, 'With Regret' builds and builds until it reaches a point where you look back on the tune, as a whole, as a great one.


"There can be a new agreement, people honour with carefulness regarding the line -
And the trespass-margin
As a natural catastrophe is diverted
And a sigh of relief to Jah and HIS thanks giving -
Quickly collapse back into bickering and squandering
AND THE GRATEFUL THANKS FOR LIFE IS ALSO FORGOTTEN
And it's a chance to remind all di nations sing
What a thing to experience, ya now it's just breeding
Much less soldiers on the front out there with guns barking
And a war-recount heroic to a man lineage
WHEN HIM DISTINCTLY RISK LIFE AND LIMB TO SAVE SOMETHING MASSIVE
Something big like the sovereignty of the nation King
Inna the front of troop of Israel, as a youth David
As a mark of distinction upon a man solid
And a man weh run all day to bring tidings to hi village-
Was a marathoners think old Afrikan system
They even training hawk and falcon and messenger pigeon"


There is a point there where Benjamin seems as if he will never stop and the riddim behind him absolutely grips his vocals and makes for one of the most memorable stretches on any song on the entire album. And again, that track continues after the vocals. And wrapping up the first half of "Be Strong" is a composition which, although it isn't the most dynamic sound, is no less mighty to my opinion. 'Set It and Done' was an early favourite of mind from the album and it continues to be so. I called it not very dynamic (and it isn't), but it does have a very subtle pacing to it which makes it sonically very pleasing to listen to and it goes without saying (yet, I'm going to say anything) (and do it with a smile one my face and no shame at all) that the message is top notch as it always is.

The second half of the album continues to offer up big and winning moments with a couple, in particular, reaching near the heights of anything to be found here. 'Dirt and Clay' may not be one of those tracks, but it is damn solid and a piece which excels, at least partially, because of its very simple base sound. It focuses on unity and the basic similarities shared by all and not to be missed. Also check 'Relates To Everyone' and especially 'Past Tense'. Both are really nice offerings, with the latter being nearly special to my ears. The former may prove to be the type which requires just a bit more time to grow on you and I wouldn't at all be surprised if a year or so on from now it ranks even higher for me from this album (and the violins on that song, credited to Samuel Wexler, are divine). 'Dem Kinda Heights' is the first of the couple of VERY big tunes within the latter stages of the album that I mentioned and it may just be the second mightiest effort that I hear on "Be Strong" after the title track.


"No ease outside, you have to find it inside
No groove pon no string that dun bust pon yuh harp
What's the closest feeling of experiencing heights?
Purest interaction, you can nostalgia-lize
Something pass along with the love and the thought-


Grrrr! The song has an almost ponderous appeal to it and it kinda PLODS its way right into your affections. And lastly, literally, is the fine final song on the album, 'Bless The Nest' which, as its title would suggest, is  a song the power of the HOME. This is interesting because -- and you know you are listening to a Vaughn Benjamin song -- "home" is not a place. There is no literal nest to bless. Instead, "home" and "the nest" is wherever and WHATever brings you comfort under the guidance of His Majesty. So "Jah bless…" whatever HE wants you to and how HE wants you to feel. I'll likely never tire of deciphering meaning behind the words of Vaughn Benjamin and even though this album only affords me ten new opportunities to do it, with a running time just over forty minutes - by its end, it seems so much longer. 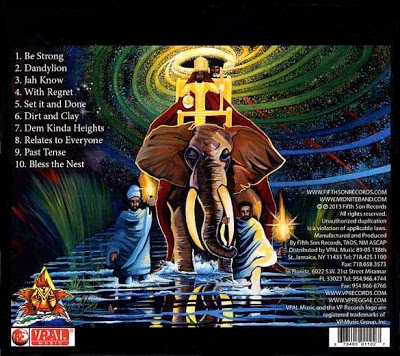 Overall, while I'm not prepared to call "Be Strong" a 'stronger' release than "In Awe", I will say that it is starting, for me, on a higher level. As that album taught me and continues to teach me when I listen to it to this day, a year and a half later, albums like it and like this one just seem to grow and I am damn looking forward to the 'sprouting' of this one. Certain spots of it definitely have a similar time-delayed type of feel, as I alluded to in regards to 'Relates To Everyone'. Probably because of that and despite the fact that I wouldn't typically do this, "Be Strong” gets a less than conditional recommendation from me. I think fans, new and old alike, can enjoy it and, should you spend a little time with it, that should be especially true. I was REALLY looking forward to this based on the previous release and personal experience with the artist and I'm not disappointed at all! In "Be Strong", Midnite and Fifth Son Records have another strong beginning, a more than fitting next step and one which almost certainly only look better with the passage of time. Sublime.