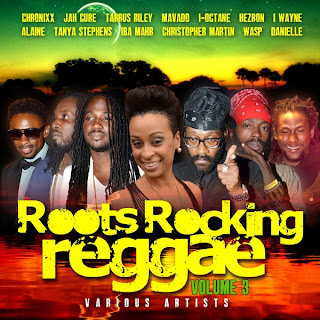 
First up this week is the most welcomed return of one of my favourite compilation pieces from a few years back, "Roots Rocking Reggae" from the always active Tad's Records. The first two editions of this series were outstanding and were done, largely, under the guidance of the mighty Al.Ta.Fa.An. and were just strong modern Roots selections. This time around things are entirely more varied -- with more "rocking" than Roots, but it's also a nice edition as well. I was well under the impression that the series had run its course, so I was damn happy to see it not only back, but on CD as well. The names aren't who would expect from editions one and two, but I don't think anyone at all will mind tunes from the likes of Tarrus Riley, Alaine, I-Octane, Jah Cure, Chronixx, Iba Mahr and others. Far better for casual fans but not terrible for more experienced listeners either. 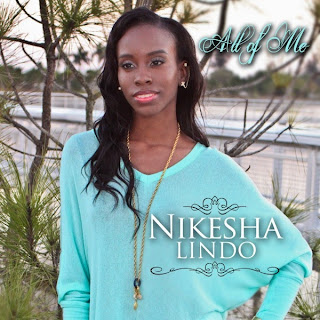 "All of Me" by Nikesha Lindo [Heavy Beat Records]


Extremely gifted vocalist, Nikesha Lindo, makes her debut with a delightful release in "All of Me", unsurprisingly from the wonderful people at Heavy Beat Records. Nikesha (like most people carrying the name Lindo who make Reggae music) makes an adorable blend of heavy old school and Lover's Rock Reggae and although she may not be a household name in Reggae circles -- at least not yet -- anyone who has followed her career to date knows that Lindo has a nearly overwhelming talent in what she does. Her new album figures to be a sparkling example of all of those skills and more and you'd be… kind of stupid not to pick it up. 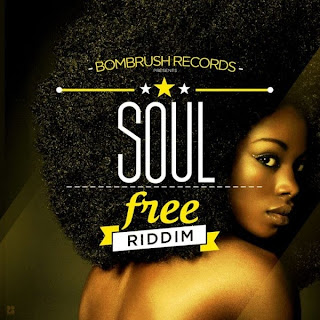 
That guy from TOK and his Bombrush Records imprint are back with their first creation since their last one, and arguably the best they've ever done, the GORGEOUS Soul Free Riddim. Along with the cover, which is delicious, the track itself is a gem and it is given to a variety of talented vocalists who make the absolute best of it. Of course there's TOK, but they have a tune alongside Gentleman [BOOM!], Gyptian, Munga Honourable, Lutan Fyah, Esco, Jamelody and Wayne Marshall also show up for what proves to be an excellent riddim showcase.

Digital
{Note: The tracklist of the Soul Free Riddim may be incorrect, so be sure to check clips if you purchase individual songs} 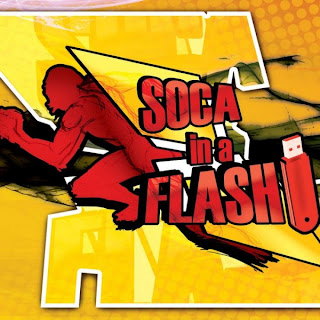 
Biggup Scrappy ["Dust de ash! Dust de ash!"] [BOOM!] and that giant annual Bajan Soca compilation for, collectively, letting everyone know that Faluma is still in business and it's time for that compilation (which I'm pretty sure always has something to do with Blood). These things always have two-thousand songs on them (thirty-two this year), so it cannot help but have something for virtually everyone on some level or another and this year, obviously is not any different from prior years on that. Blood stars, as do Peter Ram, Hypasounds, reigning Road March champion, Mikey (with 'Ready Again', which is just RIDICULOUS!), Paula Dion and even Contone. Who would have thought that all these years after his car notoriously broke down, Contone would STILL be doing mad work?! A very nice set here. 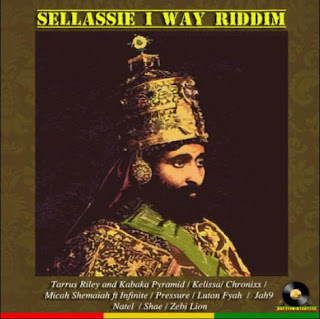 
BOOM! A big credit goes in the direction of Israel Records for delivering the classy Selassie I Way Riddim, which is probably the best of its kind in this post today. This HEAVY modern composition plays a perfect backdrop for some excellent Roots music from some of the best of the day. Most notable is 'Fly Di Gate', a MASSIVE combination featuring Tarrus Riley alongside Kabaka Pyramid, but Chronixx also features as does Zebi Lion, Pressure Busspipe, Lutan Fyah, Kelissa with the riddim's title track and the monstrous Jah9 who, as usual delivers a lyrical master class with her 'Divine Government'. An easy one - not to be missed.


"Jah is I sword and shield
Haile [!] give I everything I need
HIM alone is rightful divine government
Yes Jah, trod this earth as flesh
As the evidence of life conquer death
HIM alone I livity must represent

The final frontier, the real battlefield is within our consciousness
The prize to be won, the victory to be gained is within our heart!
THE LOVE WE REFLECT, THE HATE WE REJECT IS TESTAMENT TO WHETHER THE MOST HIGH IS PRESENT
And reigning on the throne!
Or if the enemy convince us we can go it alone

When Jah is I sword and shield
Haile [!] give I everything I need
HIM alone is rightful divine government
Yes Jah, trod this earth as flesh
As the evidence of life conquer death
HIM alone I livity must represent

HIM MEK ALL OTHER GOVERNMENT - IRRELEVANT -
Irrespective of material things
All other church and state - will have to abdicate
In the presence of The King Of Kings
The war we have to fight is for truth and rights -
The chains of oppression will be breaking
No weapon could stand a chance
With Haile Selassie I leading the advance!
The truth of I plan
The strength of I hand -
Are granted by The Mercy
Forgiveness from wrong and salvation are granted by The Grace
CONFUSION BECOME CLEAR, ILLUSIONS DISAPPEAR AND THE MORE I GET TO KNOW OF HIM
Revelation now has been made!
Cause I have seen HIS face!

And Jah is I sword and shield
Haile [!] give I everything I need
HIM alone is rightful divine government
Yes Jah, trod this earth as flesh
As the evidence of life conquer death
HIM alone I livity must represent" 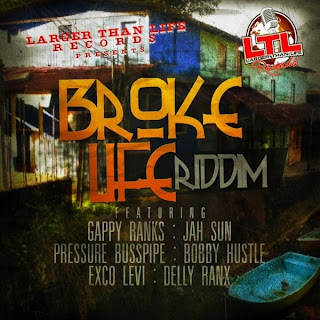 
Larger Than Life Records is back again with the very familiar Broke Life Riddim for 2013. The excellent, bouncy and somewhat old school composition may be recognizable to your ears because it carried the very clever 'Gimmi Di Ting' by Delly Ranx, which appeared on his stellar 2012 album, "The Next Chapter" ["Gimmi di, gimmi di , gimmi di - di same thing you Mother give yah Father"] and that tune appears on the riddim's features along with others from the likes of Bobby Hustle, Pressure Busspipe, Gappy Ranks, Jah Sun and Exco Levi. Very nice. 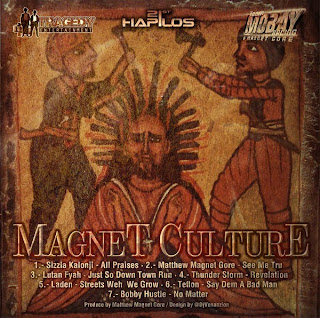 
Bobby Hustle also finds a place on the solid Magnet Culture Riddim from part time producer, vocalist and racecar driver, Matthew Gore and Tragedy Entertainment. Gore, himself, also pushes a tune on his own track and does decently with 'Time For Us To See'. Thunder Storm also appears as does, most notably, Laden and Sizzla Kalonji. Not every tune here has me amazingly excited, but there is good material, so check out the Magnet Culture Riddim from Tragedy Entertainment for yourself today. 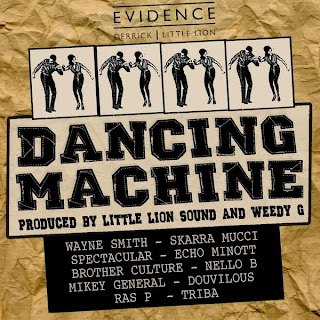 
Evidence Music, Little Lion Sound and the wonderful people at Weedy G Soundforce all team up to give up the infectious old school Dancehall vibed Dancing Machine Riddim. It is Weedy G's, of course, which is most familiar and they almost always do excellent work and this latest track is no different. Any time you can get TWO songs from Wayne Smith, you know you have something potentially special and they don't stop there. Also appearing on the track are Mikey General, Spectacular, Skarra Mucci and Echo Minott. But to my early opinion, it may just be the burgeoning Triba taking top honours here with his scorching 'Killing Machine'. 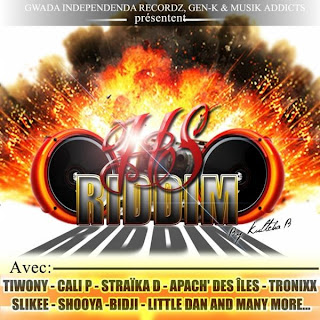 
Tiwony, Cali P, Straika D and Slikee lead a strong pack of vocal talents who all (or mostly) make a proper usage of Kultcha B's colourful and downright hypnotic Hs Riddim. This thing exists somewhere between Dancehall, Pop and maybe even Soca at times which, obviously, makes for quite a few fun moments and an outstanding pickup if you're looking for something a little lighter. 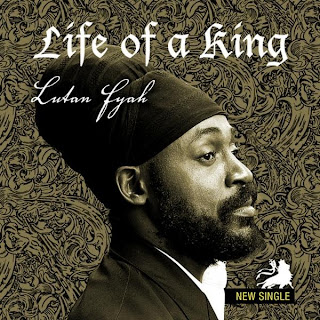 'Life of A King' by Lutan Fyah [Grillaras Productions]


And finally is a tune from an album which we alluded to a week or two ago [I THINK] as Lutan Fyah has linked up with the fine Grillaras Productions to do a new tune, which is a nice one, 'Life of A King'. More importantly, however, the chanter is also reportedly working on a full album with the label of the same name for some time later this year and it may include a combination with  the scalding Chronixx (… which is excellent, but is there anyone else REALLY hoping that they do a Lutan Fyah/UT Ras tune???!). If you have not been paying a good attention to him, Lutan Fyah has been quietly having another big year in 2013 and its crowning jewel (or at least one of them, there's also an I Grade album still forthcoming) may not be too far off now.

Also: "More Love" by Little Hero & "Be Careful" by Matthew McAnuff
Posted by Achis at 11:04 PM