The Vault Reviews: "Maschaana" by Midnite 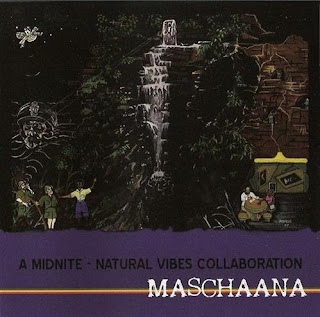 Unlock it. It is a situation which is reserved for only the most active of artists in music, but it is one which is also quite common - the kind of 'ranking' of albums, not in terms of quality, but in terms of popularity. They have so many albums that you get to a point where a handful of them are well known to pretty much anyone who might be interested in a particular genre and following that a descending group of others which fill their catalog. In the next step in our all kinds of random look back at the work of Midnite, we come to an album which, as a few we've looked at up until now, went virtually completely unknown by most fans in its time and, if such a thing is possible, has even gone down in popularity in the half decade following its release date. We've already well looked at such an album in the form of the downright mysterious "Ark A Law", which basically just never seemed to get where it was going, but is probably somewhere still trying to get there. "Ark A Law" was very interesting on so many levels, but most fascinating it was an album which kind of went ignored by many of Midnite's more intense fans. That's just ridiculous! If you have any experience with the more hardcore fans of Vaughn Benjamin and co. you know exactly how passionate they can be and for an album to barely make a ripple, even when it was brand new, is damn odd! Comparatively, even if you look at albums which have grown to be less appreciated throughout the years, such as one which we've recently covered, "Thru & True", "Ark A Law", substantially, is less known than even that set which, as we discussed, is one of the least regarded of all of Midnite's releases. There's also another album which isn't very popular that we examined, "The Way". That album's 'lifespan' just amounted to bad timing. It was released in a time when fans' attention was simply put more into different (and arguably better) directions, so it wasn't as surprising what happened in that case. Now we take a course of an album which has also gone overlooked and, like "Ark A Law", has gone so much so, that it could well be called somewhat mystifying - something which I now find to be very strange after listening to it and then beating down for the point of reviewing and discovering for the four-hundredth time in reference to a Midnite album - that it was MUCH better than anyone gave it credit for being.

"Maschaana" picks up considerably following its largely average beginnings and this clearly becomes apparent on my single favourite song to be found on this album, 'House of Behaviour'. BOOM!

"Rastaman ah chant natty ganja raider
Love Jah more!
Inna di house of behaviour
IMPORTANT TO YUH SYSTEM LIKE AN ALTERNATOR
Inna yah breastplate, important like a carburetor
Gratitude and love ya inna combination
Such a subtle feeling well come be near yah
Attack and hater!
Subtlety and quite - and revenge fi later
From Egypt to America, two-thousand years later
Identical anti-tactics of reaper
Family is the world, we could not exist on yah
The mountain of folly no accept the leach yah"

This song is a lyrical powerhouse of a piece which doesn't give in even a little and a full dazzling and unforgettable piece. And with a tune like this, you have to wonder if anyone heard it, because Midnite fans would erupt over something like this and it isn't the only one on this album with such a pull ["bun down di joint three more centimeter = clean out ya head, doubt of negative thought ya"]. Later on we get to a HEAVY piece by the name of 'Sang Real' which is also exceptional. Vaughn Benjamin goes purely ahead with a fairly aggressive delivery on what is an equally forceful praising tune for The Almighty. The song which takes over following 'Sang Real', the stirring 'Hold It Up' is also not to be missed. I didn't remember a song like this even being on this album. If I did, I wouldn't have thought it to be so skeletal and minimal, because this piece, and a few more I still have to tell you about, are anything but. As for the song, it's essentially about pride and having self-respect for what is the role you play in society. Whatever you do, 'hold it up'! And then there's 'Good To Me, Good To Be'. TEARS!

So many times I allow pride to stand in the way
Pride of person
When I look and see what has been done to the Haile characteristics manifested His Majesty
I STILL KNOW JAH HAS BEEN GOOD TO ME!

I have faith in my idren -
To rise and never fall again
I have faith, one-thousand

Youth happy and healthy
Yeah, Jah been good to me"

There is a piano here and it provides the track with this breathtaking aspect to it, so you have to pay attention to it (well, obviously you don't have to) and, for his part, Vaughn Benjamin doesn't try things too hard. Instead he gives us this effortless technique which is being thankful for what he has received in life. The very clever 'Outta Sight, Outer Mind' also ranks very highly on "Maschaana", as does 'Clean Area', though the latter of those two took more than a minute to grow on me with odd arrangement. Ultimately, as is so many times the case with Benjamin, it becomes a powerful lyrical display which more than makes for any shortcomings it may have in any other 'area'. However, though I rate 'House of Behaviour' as the best song on this album (because it is), the one of which I am most surprised NOT becoming a substantial hit is definitely the MAMMOTH 'Sha-Tee'. Here, Vaughn Benjamin gives us a 'The Gad'-like stream of lyrics which is something which sounds like it took several years to craft, but is seemingly an instinctual action for him (and him alone).

"WITH A DILLY THIS AND DALLY
AND THE TWO AH DILLYDALLY
With the misentry of collie, still ah bouncing pon di challie
And the numbers up wi tally only add up in di lobby
And di congress is di baddy, supreme court ah fight dem hotly
And di golf cart and di caddie and di mental and di body
Have to situate already and it's usually di media -
That ah pretend that it's funny and I thank dem pon my time -
INSPIRATION OVER MONEY

Inna various of money -
When it done, dem call it dunny
As di vibes of Jah is sunny
And mi sun, I know Jah give wi
And it's numerous and plenty weh to better everybody"

The tune is amazing and immediately it became one of my favourite Midnite songs ever. And I remember this tune, but never remembered it sounding anything like this. DAMN!

The remainder of "Maschaana" (because after all of that I still have eight songs to talk about) (biggup Vaughn Benjamin) (biggup Ras L) also gives us a few nice moments as well, particularly near its very end. Closer to the front, however, is a decent pair in 'Blessed Be The Name of Love' (which isn't horrible, despite its name) and 'For Life'. I really tuned in on the first of these for quite some time as I, for awhile, considered it a favourite. It's very involved despite its straightforwardness and a winner on some levels. 'For Life', on the other hand, is the definition of skeletal. If you subtracted EITHER the riddim or the vocals from the tune, I don't think it would be much different from what it is (and I go from that to listening to 'Good To Me, Good To Be') (the transition is kind of jarring) ["Good to me! Good to me!"] [BOOM!]. And then we head towards the other end and get another song which is currently working on my affections, 'Goes Out'. This song is different, to say the least and initially I began with the kind of thought that it didn't sound very good -- with Benjamin actually doing some rapping! -- but there're enough elements of the chanter in his natural state to make this one worthy of your time and I'm still working on it. The final judgment has been passed in the case of 'Run Dung' though. The vibes on this one are FUNKY. They're kind of Jazzy and although not a highlight for me, it's easily a changeup for the album and not a bad effort either. Speaking of not bad (and a little better), check 'Say Something'. Another piece which is quite thin, in this case it works well and its strange sound (and it is odd) notwithstanding, 'Social Arena' is a tune which isn't bad either… behind that Jungle-ish track it features. Again, it features a version of the artist that I'm more used to with the straight ahead chanting and I find that, at least in the case of this album, when it does feature a deviation from that style is when I'm less impressed.

As I alluded to, “Maschaana" once again rights itself at its conclusion with two big songs, 'Give Jah Thanks' and 'Set Up'. With all of the zaniness right ahead of it, the former was a very welcomed returned to normality and it also features, in a slightly toned down way the same effective vocal doubling which is found on the opener. The song is self-explanatory and it brings with it this nice and calming vibes which come in SO nice. As for the album's closer, I'd be some kind of surprised if it was the case that this wasn't some type composition which was just vibed together, but if that was the case, then what they came up with worked fantastically and places a beautiful bow on the album. 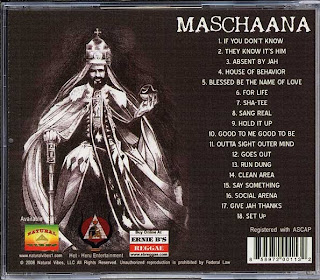 Overall, I don't want to seem like I'm attempting to make the case that "Maschaana" is a GREAT album because it is not. As I mentioned, it does get softer during much of its latter stages and the full start isn't amazing either (it's what comes between them which is considerable). However, for an album which has not only been largely forgotten and one which, even for its time, didn't receive too much attention, I think that "Maschaana" is MUCH better than it has ever been credit for being. The absolute best of this album, songs like 'Good To Me, Good To Be', 'House of Behaviour', 'Sang Real' and 'Sha-Tee' (and 'Hold It Up') rate very well, in my opinion, when compared to the very best of any number of other Midnite albums and, in retrospect, I'm pretty shocked an album like this received the fate that it did. 2008 did give us the HUGE "Standing  Ground" and Midnite's live release, but albums have had more in the way of 'competition' and done better than this one did. But you can still take care of that. By no means was "Maschaana" one of the best Midnite albums ever, but if you've never REALLY listened to it, I can pretty much guarantee you that it is significantly better than you think it is.