Who is "rising" in this case - Her name is Reemah. I've definitely been listening to so much of Virgin Islands Roots Princess' music lately and, as you can see, passion has driven me back into writing about her music once again. What I'm thinking these days is that if you follow Virgin Islands' Reggae, what you've surely noticed over the years is that, just as has been the case with males, comparatively they've also produced a very steady stream of female stars as well. Names such as Mada Nile, Nubian Natty, recently Ima, Lady Passion, Empress Nyingro, Sistah Joyce (and I don't know if Sistah Joyce still makes Reggae music, but she has established a very successful career as a Calypsonian which has already seen her take at least one Calypso Monarch crown (and I think two actually)), most notably Dezarie and others still. Like I said, they've pushed some very impressive talents throughout the years and it doesn't figure to be slowing down anytime soon either. The latest in that group, Reemah -- at least in my opinion -- also has a serious possibility of mirroring the successes of some of her prominent male counterparts such as Ras Attitude, NiyoRah and, of course, Pressure Busspipe in grabbing a more central brand of the limelight from Reggae fans. While she may not be the most dynamic artist yet, what she most has going for her is an intensely brilliant form of lyrical zeal which, should it continue (and it will), I do not think can be ignored.
Obviously, the greatest example of what she can do can be heard on her amazing debut album, "Check Your Words" from last year on Feel Line Records. The more and more I listen to that record, the more and more impressed I am and I wouldn't at all be surprised if, in a decade or so (hopefully aided by another three or four releases from Reemah in that time), I came to regard it as a modern classic. That album, in retrospect, was about as powerfully written of an album that I've heard in a long time (ranking, in recent memory, alongside the likes of Jahdan Blakkamoore's "Babylon Nightmare" and Jah9's "New Name" ["weak heart ah tremble when dem hear it sound!"] and maybe one or two others). In the past I've compared Reemah's work slightly to Vaughn Benjamin, but I think that a more apt contrast would be to compare her to someone like an Ancient King (new album, "Ethiopie", in stores now). The King is FIRE. At his best (check his debut album, "Conquering Sound"), he is this captivating intelligent burn which reminds you of people like Capleton and Jah Mason and, while she does it in a different way. It isn't that burn at any cost type of fire but instead it is a feminine and nurturing scald and Reemah's blaze is very difficult not to pay attention to and not to LOVE.

Everyday another youth blood running cold, inna plain view
Somebody please make a rescue
And some a di parents, not even old enough to pay rent
Lord we need a breakthrough
Looking out at society - so many broken dreams
What does it say to me?
Emptiness, Lord please fill this vacancy
HOW CAN THEY SAY THEY CARE AND STILL LET  THIS BE???"
-'Better Way'

"Watch the state -
Dem ah set dem rule, ah set template
Prodigies of the youth can't even hold dem weight
Boasting influential, central, and yet more and more, everyday, end up homeless at a steady rate
ADVERTISE ALL KIND A REMEDY FOR DISEASE
WHEN YOU'RE THE ONE WHO MAKE WI SICK INNA DI FIRST PLACE
Planting seeds inna our heads to buy unnecessary items
And a better life when you know it's a dream to chase
Wake up everyday, seeing how you're meddling
Inna progression - want to keep wi at a slow pace
Hypocritical - posing with your briefcase inna hand
When you know it's a different story when you turn your face

Evil in dark places
BABYLON WORKING OVERTIME, TRYING TO DESTROY YOUTHS' MIND
Convincing words while they smile
ERADICATION OF ALL BUT THEIR OWN KIND
Moral crisis and infanticide
Obsessed over credit, now we're gone worldwide
Why won't you show dem who you really are under your disguise?
Gotta go out and burn down all babylon sign

So don't ask no question - no!
Just burn down babylon! "
-'No Question'

"Hear dem out
'No justice, no peace' dem shout
One more politician, one more doubt
One man cry represent all bout
Unfair practice, dem dun spiral out
MAKE SURE YOU FEED YOUR MIND NOT JUST YOUR MOUTH
BLIND REPETITION CAUSE SPIRITUAL DROUGHT
Sure inna these times di weak weed out
Di real - camouflage as make believe
What is on your screen was already conceived
Isn't it ironic how you wipe your plate clean?
What you gonna do when we level di playing field?

I've seen far less gifted writers celebrated in a major way and I am of the mind that Reemah's time in the big light is coming. Until then, however, You and I can enjoy the sterling work that she's already gifted to the world and watch this burgeoning star began her rise to power. 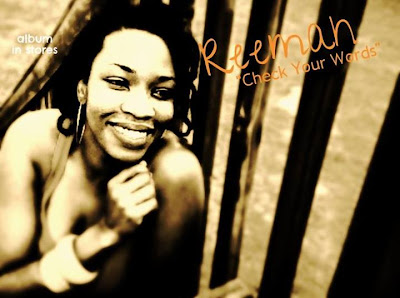