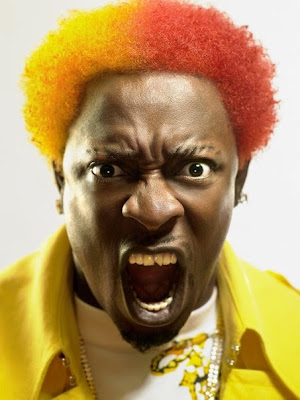 It's probably because he's able to generate an interest in so many different ways that we tend to forget just how talented longtime Dancehall staple, Elephant Man can be when at his best. When it comes to combining the element of theatre and histrionics and physical pyrotechnics with a very powerful command of the spoken word, Elephant Man has very little in the way of equals and probably all of them come from the arena of Soca. It is and has been his always been his specialty and the 'Energy God', has perfected in his time. So we take a look at how exactly he arrived at this point and take a trip through one of the eccentric and colourful catalogs in Dancehall music. Discography: Elephant Man 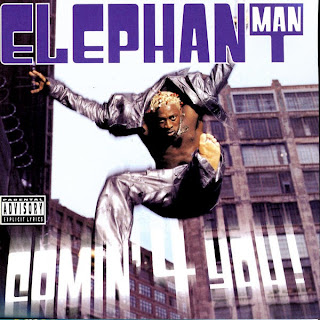 
One. Ele's debut album, "Comin' 4 You", also began what would turn out to be a vary fruitful and successful working relationship with the once mighty Greensleeves Records which would turn out an album a year for three years, including some of the DJ's finest work. This album was also very likely one of the strongest hardcore Dancehall debut albums of its time. "Comin' 4 You was BIG… literally. Checking in at a ridiculous twenty-four track with nearly seventy-five minutes of playing time, the album, in retrospect, virtually went out of its way to introduce Ele. He would also have serious help in the way of Beenie Man, Mr. Vegas [twice] (including the madness that was 'Bun It'), Delly Ranx, Ward 21 and Wayne Marshall. Highlights were plentiful and included such tunes as the extremely clever 'Caan Trick Me', '$1000 Bill', 'One More [Start A War]' and the MASSIVE 'Replacement Killer'. The album also featured an impressive bag of riddims from some of the genre's finest maestros of the time. 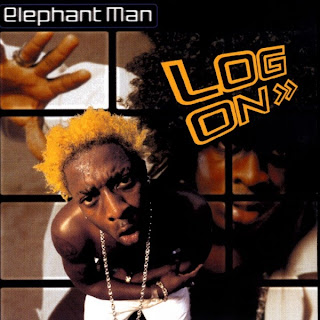 
Offline. Arguably the second most well known album on this list - the ultra-controversial and well worn title track of Elephant Man's sophomore set, "Log On" has become a bit of an infamous song in the dozen or so years of its life, but these days it barely registers on an album which was, like its predecessor, well stocked. Though a solid case could be made that the first album was even better (and I think that I would make that case these days), "Log On" was definitely something special and when, again, you looked at the talent which joined Ele here, it isn't surprising at all. Ward 21, Buju Banton (speaking of controversy), Spragga Benz, Ce'Cile and even Ky-Mani Marley would turn up on another monster - this one being twenty-two tracks long (interesting fact - Ele's first four albums all had at least twenty songs and nearly NINETY in full). So many songs here probably got overlooked by the title piece, but songs such as 'Bad Gal, Bad Man' w/Ce'Cile, the WICKED 'Su Wi Tan', 'Showdown' w/Marley, his response to Ce'Cile's huge hit, 'Changez' on the same Chiney Gal Riddim and just a few others, including 'Living In Hell' with Bling Dawg, still have shelf-life remaining. An album existing in strange circumstances these days (and fittingly so), but not one without total interest musically. 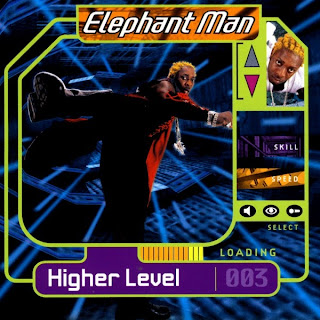 
Party like this. Ele's third and final album for Greensleeves, "Higher Level", looking back, was probably the best and… probably his best album altogether as well. Interestingly, unlike its two predecessors, this album had very little in the way of guests with only Jagwa [twice] and Jarvis Church & Esthero lending a hand between three selections. The other TWENTY featured nothing but Ele, officially. But "Higher Level" was, for its day, Dancehall musical theatre of the highest order. It was a FUN album and one which put on the full and colourful display of its star when motivated. Though the vocal help was definitely lacking, the musical aide was present in full with the likes of Stephen 'Lenky' Marsden, Don Corleon, Scatta, John John, Shams and others providing tracks over which Ele would deliver pieces such as 'Elephant Message', 'Krazy', 'Egyptian Dance', the unfortunate followup to 'Log On', 'Online' and a trio of hysterical efforts in 'Bad Man A Bad Man', the title track (good luck getting that out of your head) and the Xmas inspired high level lunacy that was 'Tall Up Tall Up'. A RIDICULOUS album, but I mean that in a good way for the most part as "Higher Level" was so much FUN to listen to. 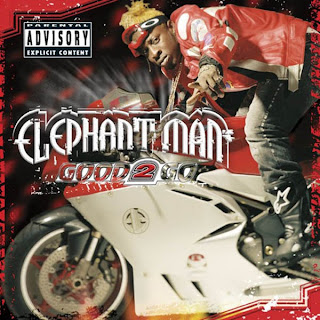 
The signal. The Elephant Man would later set his sights onto superstardom of an international kind which would take his next two albums to the major label circuit. At the time of the first of the pair, "Good 2 Go", the DJ would take advantage of the wave ridden by the likes of Sean Paul and Wayne Wonder and catch a global fire with a hit of his own, 'Pon Di River, Pon Di Bank'. I don't love this album. I liken it quite close to its predecessor and it is not that good, but there were nice moments here. Along with the title track, its most well known pieces were songs like 'Signal Di Plane', the ridiculous 'Fan Dem Off', 'Cock Up Yuh Bumper', 'Blasé' and maybe a couple of others. Definitely the most well known album on this list, but not the worst… that comes next. 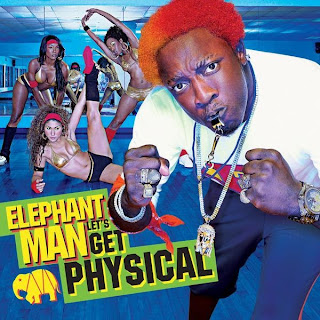 
Let's not. One may've figured that following "Good 2 Go", Ele would have been heading for another set for VP/Atlantic, but while he didn't go that route, he would ultimately head in a very popular direction for album #5, "Let's Get Physical", this time teaming up with Puff Daddy and company at Bad Boy Records. Ultimately there was just way too much going on with this one, which says a lot for an Elephant Man album, in general, and one, in particular, which was easily his shortest ever by that time. Combinations from a variety of different artists abounded, including appearances from Rihanna, Busta Rhymes and Wyclef (and about four-hundred other people). Standouts were few and far between on two editions of the album, but one of them did include 'Willie Bounce' (which I used to REALLY like) and 'Gully Creepa'. 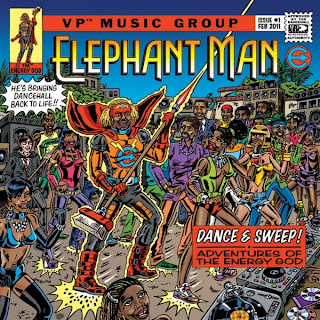 
Back in shape. And most recently, following 'Let's Get Physical", Elephant Man apparently needed more familiar terrain and he found it in the form of his debut set for VP Records alone, the all kinds of fascinating "Dance & Sweep: Too Lazy to Type Subtitle". This album headed back in the direction of "Higher Level" and "Good 2 Go", where it was all about having an uncomplicated level of fun. Not my favourite album here, but credit goes to where it was due as the album became a perfect musical embodiment of its cover art. Songs such as 'Sweep', 'Swing', 'Step Ova', 'Nuh Linga' and 'Shake It', pretty much told you what you were dealing with, but still it was the ear crack-ish 'In Jamaica' which lead the way. Bounty Killer, Ding Dong and Kardinal Offishall featured.
Posted by Achis at 11:13 PM