Rewind!: "Bring Back The Vibes" by Lion D

We've made it a point to go back and revisit some of the biggest albums of the year thus far and we've already dealt with the likes of Chezidek, Norris Man, Malika Madremana and, of course the biggest of them all, Jah9 and now we continue with an album from another of our absolute favourites, the captivating Lion D. Four years back, the chanter would introduce us to "The Burnin Melody" album which would prove to be one of the best albums that I'd heard from anyone at the time and the single biggest of 2009 as well and though it took him a little longer than I hoped (he could make an album every forty-five minutes and I'd probably ask him what is taking so long), what ultimately would arrive was well worth the wait. Once again linking with esteemed Italian imprint, Bizzarri Records, the Lion would set forth a fantastic display and one guided in the notion of a paying a heavy tribute to old school Reggae music. Today we pay a tribute to IT, a fantastic followup and, easily, one of the best albums of 2013 thus far and Rewind! "Bring Back The Vibes" by Lion D

See Original Review
{Note: Obviously we excluded the Skits from the Rewind}


The intro for "Bring Back The Vibes" is an interesting song and one which I think is deserving of a bit of analysis. So many times you look at intros as a most DIRECT table-setter for what is to come, but I think that 'Can't Get Me Down' takes a more distinct course because instead of saying what the album is going to be about in his own words and what the listener is going to spend the next hour or so listening to - what the Lion seems to do is to say that no matter what, he's happy with his work here (and he has great reason to be so) and he's happy in general and that's how he'll stay.


"If love is the answer
Man haffi ask the question"


Originally, while I was definitely able to appreciate this song, I don't think that I may've given it its proper credit and it is obvious why. If you listen to 'As One', what you quickly and immediately notice is just how wonderful it is to listen to. It is a joyous experience of a tune, but you'll have to sift through that (HAPPILY) and when you do what is beneath is an socially inspiring and uplifting tune which easily marches its way amongst the absolute finest selections on "Bring Back The Vibes".


As I did say initially, while you may be tired of the subject behind 'No Bleaching Cream', most unfortunately and disgustingly it is a still a current topic (which is remarkable in a sickening way) and this song, in particular, goes a bit further than most you're likely to hear on the issue in recent times because it really deals with things in a more indirect route. Instead of just saying 'don't do it', essentially the Lion takes an approach which says that bleaching is a significant sign of such things as low self-esteem and self-image and all sorts of other complications which're unnecessary, because your skin (whatever tone it may be) is beautiful.


"Black Woman you look hot, you ever draw my attention
You nah need none a dat fi improve yah complexion
MI LOVE YAH SKIN TONE, YOU NAH NEED NO CORRECTION"


As a lifelong master in the arts of procrastination, I'm someone who certainly can take a great deal from a tune such as 'Work'. Besides the obvious -- the song is a fairly straight forward call to [literal] action -- I also think that there is an element here around being humble and unity. What I really enjoy is how the song is presented. The backing singers are ultra-involved throughout so you get this 'community' type of feeling which really amounts to 'help'. You may not want to do what you should be doing, but all of these people will be there with you and you'll make it through. I should also mention the SUBLIME guitar on this song which makes it one of the most dynamic pieces on an album not starving for such tracks. Excellent.


Following the first of two skits on "Bring Back The Vibes" is a song which I declared my favourite on the whole of the album, 'Blessings'. About five months on an… It is still the leader for me. Looking back there is something hear which now stands out so far for me in terms of why I love this song so much (and it is one of the best of the year in my opinion thus far) and that is how well it encompasses what I feel is one of the Lion's greatest traits as a musician. He never seems to plan things out too far. Inevitably, when at his best, you'll almost always get this feeling that he's kind of free-styling it to a degree and that musical LIBERTY comes trumpeting through all over 'Blessings'. You can feel the emotion come pouring through and, in this case, it rains for the greatest as the song finds Lion D giving a most needed praising to His Imperial Majesty.

BOOM! Lion D links up with the always entertaining Skarra Mucci to produce one of the most enjoyable selections on the entire release, 'Nuh Ramp'. This piece was also interesting because along with the star here, Skarra Mucci had been and has been churning out big tunes lately and the slightly old school edged tune appealed directly to some of his greatest abilities and the two came up with something not to be soon forgotten. A big, big tune. 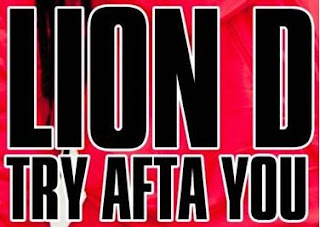 Speaking of things which you won't forget anytime soon, there was also 'Try Afta You' which makes itself something that immediately sticks in your head because it takes a cue from a song called 'Sweat' (technically) by the legendary Inner Circle. You've been singing that song for a couple of decades and will be singing it for a few more, but with a song like this, maybe you'll mix in a verse or two from Lion D.


Ras Tewelde joins the Lion next and the two give a dazzling tribute to the birthplace of the music they both make, 'Sweet Jamaica'. The song is another one which is just extremely pleasurable to listen to and is easy to kind of fall into as far as just enjoying the musical display (which is completely fine), but if you do not do that, what you will have is a tune which really just demonstrates the passion and the respect the two have for their craft and its heritage.


'I Need Your Love' is a love song [DUH!]. It is a nice one and its presence on "Bring Back The Vibes" well makes it a better album. HOWEVER, the lasting impression left by this song is the fact that there very likely exists very little in the way of documents, scribbles, doodles or graffiti that I wouldn't have a good time listening to Blacky Grace sing. Her voice is so soothing and so impressive and just magical, that I could probably listen to that woman sing almost anything and though I do not think I've heard anything knew from her following this album, I'm damn looking forward to it.


TEARS! There is something nearly enchanting about the wholly simple and organic sound behind what has become one of my favourite selections on this album, 'Babylon'. There is just so much to like about this one and I've found myself loving every bit of it over the past few months or so. As far as the topic, what I've grown to take from it is the notion of how society, and particularly oppressive society, can just get in its own way. So many things, on a large level and on a personal one, can go wrong for so many different people and it is all avoidable if we just improve certain areas of life.


Mama will always have a place in Reggae music (…and in everything else) and Lion D pays a giant tribute to his on "Bring Back The Vibes" in the form of 'Mumma'. There hasn't been much 'movement' on a song like this, as you would expect. It is a very nice offering and one which I'm sure his Mother appreciated and she isn't the only one.

The song I was most looking forward to hearing on the whole of "Bring Back The Vibes" was definitely 'Weh Dem Fah' which featured the Lion alongside the flaming UK star, Gappy Ranks (who has a new album of his own, "Shining Hope", dropping in September). Just on the most casual of levels, the two presented a combination which was potentially a heavy one and after putting it all together, 'Weh Dem Fah' didn't disappoint. It was the powerful lyrical back-and-forth I was hoping for and, as I said before, anytime they want to do this again, I'll be listening. BOOM!


Somewhat reminiscent of 'Babylon' (and I believe both were helmed by The Livity Band), the album's second love song, 'So Beautiful', is another very FUN selection. This one, inherently, is lighter than almost any other song here and it is a great changeup because of that - one pushed to an even higher level because of that golden bar of a riddim underpinning it.


I'd almost forgotten about 'No Victim' being on "Bring Back The Vibes", but going back and hearing it again for the sake of this post has reignited my appreciations of it. A very strong case could be made for this tune being THE single most lyrically impressive set on this album, but it isn't a song which so forcefully leaps out at the listener. The track is one which I'd almost call subtle or somewhat R&B-ish even, but it works in this particular instance to near perfection - largely because of the lyrical DOMINANCE the Lion puts forth.


And finally (not really) is another delightful piece in 'Irie' which, as its title certainly suggests, is just a piece about enjoying oneself and enjoying the moment. The Lion gives a credit to the vibes of yesteryear (as does the sound of the tune) and he does it in a way which is emblematic of the concept behind the album, but not at all sacrificial of what he does well. A very interesting song which may not be hailed as such because it is so nice to listen to, but again, there isn't very much wrong with just liking because it sounds great and it does.


"Bring Back The Vibes" comes to its actual end as it… brings back the vibes of the "The Burnin' Melody" album. You already know this because you already have that album and have been listening to it for years now, but "Thanxgivin" was a sizable highlight from that album and although it comes through in a different version here, one which is more laidback and straightforward it hasn't lost a damn thing in quality. In fact, being here has, arguably, given it something of a 'second-wind', because it was excellent and it still is. 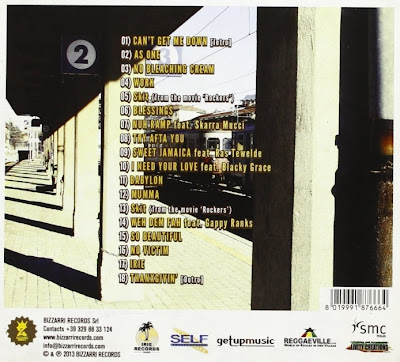 So, while I know that you knew that the melody used to be burning, it started four years ago now. If by some chance you missed out on the news, I'll tell you again - It's still burning! It's burning as hot and as bright as ever as Lion D returns in 2013 with an album which cannot be missed, "Bring Back The Vibes".
Posted by Achis at 11:10 PM