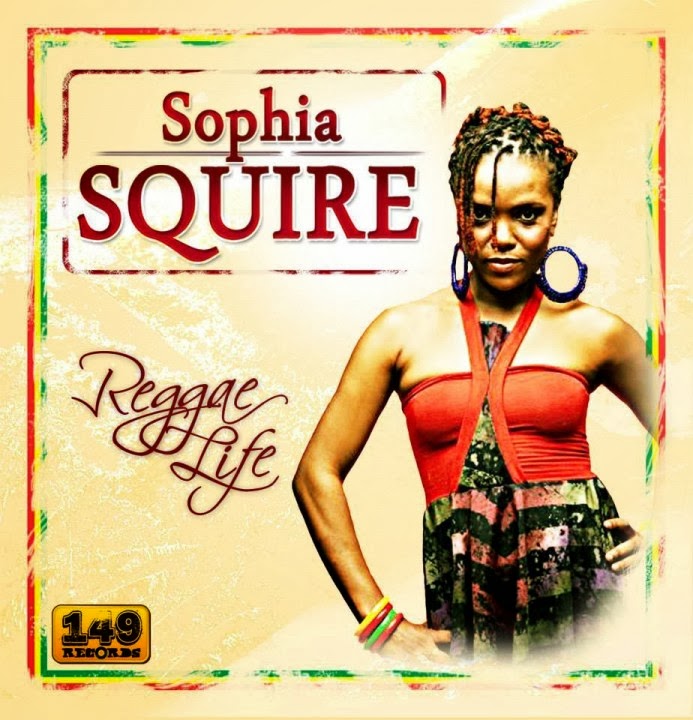 
Veteran sweet singing vocalist, Sophia Squire, is up first this week and she's getting started what hopefully turns out to be a big year for her with a brand new EP release courtesy of our old friends at 149 Records, "Reggae Life". If I recall correctly (…) the label got 2013 started in a similar way with "Rising Up", an EP from Jah Rain and, if this is their trend (while mixing in the occasional MAGIC album such as "Meditation Time" by Anthony Que), then they have my full support because, just like "Rising Up", "Reggae Life" is very, VERY good. The set features five big tunes from Squire, some of which strike as familiar, but all of which are fine exhibitions of her abilities. To my opinion, the best of them all is definitely 'Consequences', which reaches on the Datta Riddim ["Ease up the pressure on the poooooor"] [BOOM!], but the BEAUTIFUL 'Warning' is just behind it.

And, the delightful 'Whining' (very nice riddim on that song), 'Now You Know' and 'Come 'n Get It' are all worth checking as well. And, of course, the wonderful thing about bringing up something from 149 Records is that it virtually FORCES me to go back and listen to "Meditation Time". You'll do that too, because that album you already have, but also be sure to pick up Sophia Squire's "Reggae Life" EP today. 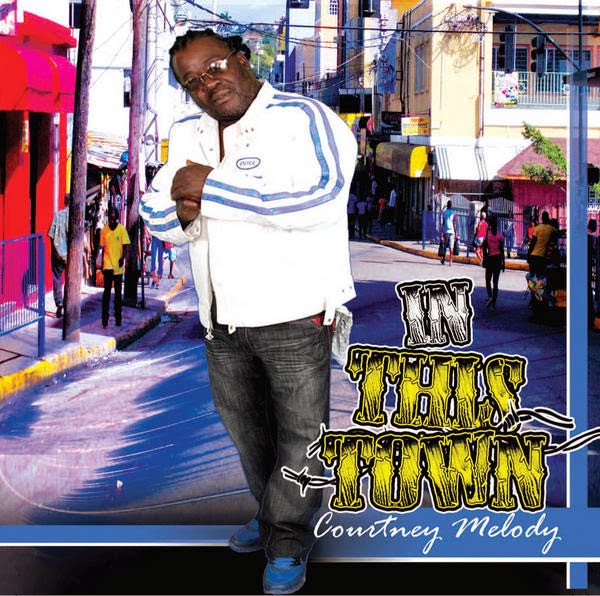 "In This Town" by Courtney Melody [Reggae Vibes Productions]


We've mentioned this one a few times recently and just happened to notice that we hadn't found a spot for it in an actual featured spot, so here it is. "In This Town" is the very first album from veteran longtime singer, Courtney Melody since his last album (I want to say that his last album was probably from 2007-ish). The release comes via Jah Mikes and Reggae Vibes who have made Melody a favourite of  there's in recent times (along with Prince Theo and hopefully he soon gets a similar treatment as well). I'm still working my way through this album, but so far I well enjoy bits and pieces (biggup Lutan Fyah) with early standouts including 'Clean Up Jah Earth', 'Never Get Weary', 'Don't Play' and 'Bad Mind' alongside Simpleman. Courtney Melody is one of those names who always has more fans than you realize, so I'm sure that this one is a big deal and even if you aren't a more traditional fan of his work, "In This Town" is probably still worth checking out and I may even slap a review on it someday.


The ever-present and wonderfully unavoidable Computer Paul and his Boot Camp imprint is back at work, this time in serving up some older pieces in very accessible digital form via a new compilation, "Computer Paul Presents Early Jugglin". Just about every time I mention the man's name, I kind of feel compelled to mention just how much work he's done throughout the years and these releases excellent examples of that. Between the two volumes, you're likely to find tunes that you're familiar with but had no idea that CP was involved with (and for me that moment happened on 'Kill A Sound' from Jigsy King and Vylmark). Big names run through both pieces such as Terror Fabulous, Nadine Sutherland, Richie Stephens, Lukie D, George Nooks, Stevie Face and others.

Also coming from Computer Paul and Boot Camp Records recently is "The Black Power Jugglin", which featured the MASSIVE title track from Bounty Killer which is the main attraction here, but the Killer didn't take things alone and was joined on the very ridable track by the likes of Mr. Vegas, more Terror Fabulous and Vylmark and also a blast from the past in the late Turbo Belly and even Silva Kidd. Between these three records are a lot to like, so definitely pick and choose and you're certain to find something you enjoy.


Also working in enumeration this week is the well reliable Don Jalys Productions who recently jumped up with three different tracks, the Furtif, Cyborg and Lethal Riddims, respectively. I was thinking that it may've been more than a minute from the last time we heard from DJP, but apparently they were hard at work (or maybe they just felt like re-releasing some stuff). In any case, their work is always very good and the UK based label who specializes in working with some of the biggest names in from the FWI once again strikes gold here. The Furtif is the main attraction here as Don Jalys goes out of their way for the track and the official release carries no less than TWENTY SIX tunes (remarkably, and unfortunately, without an instrumental). Highlighting the colourful and intense offering are tunes from the likes of Kellingston, Wyckyd J, Nicy, K'Poral Maiky, Shabba (not THAT one) with Nicy, Xelo (whose 'Summer Time' is CANDY for your ears) and, of course, SamX.

By comparison, the Cyborg is downright paltry, with a mere fifteen tunes and many of the same names shining brightly. However, I like this track even more and it does have a clean instrumental version present as well as big tunes from both Tronixx and the destructive TIWONY!

Even less packed is the infectious Lethal Riddim which comes with a nearly borderline Groovy Soca type of vibes and although it, too, is headlined by a big tune from SamX and another from Tronixx, definitely check selections from Chaby and Mister Js. Biggup Don Jalys Productions who, obviously, had a good idea in ending 2013 and beginning 2014 in a major way: Fait accompli. 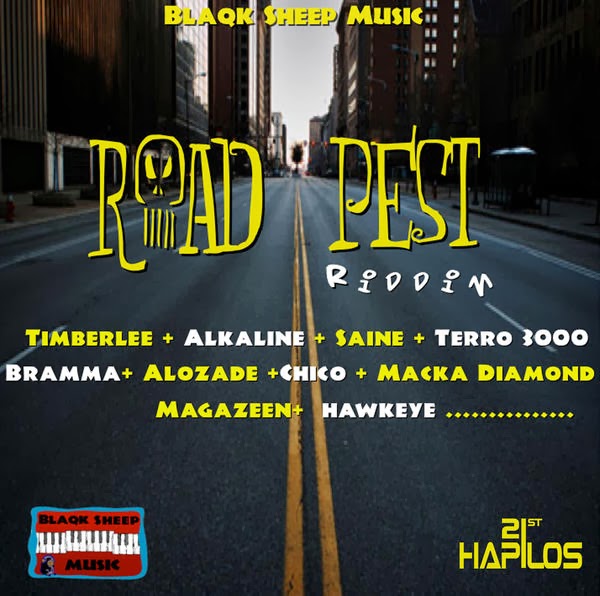 
Blaqk Sheep Records is running shit over with their latest composition, the exciting Road Pest Riddim. This piece reached a month or so ago and while I didn't like every song on the track, I definitely did like the riddim itself and it also carried more than a couple of songs worth noticing. Fortunately it not only including those, did the official release, but it also brings a clean version of the riddim. Highlights here are 'Dancehall Burial' from Bramma, and Alkaline who probably does the best tune I've EVER heard him do in 'Mouth Talk'. The former Regan, Magazeen, also does well (still rhyming about BRANDS after all of these years) as do Timberlee and Saine whose 'Undeserved' stands alone in terms of style here, but is amongst the very best on the riddim. 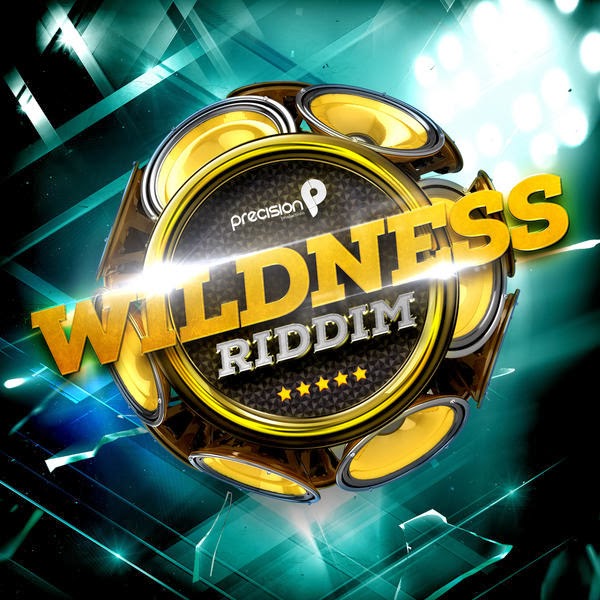 
Soca masterminds Precision Productions is also back with the full set of a riddim which BOOMED last year on the strength of one of the coolest songs of the season in my opinion, the Wildness Riddim. For the full piece (and for 2014) PP handed over the track for some T&T flavour as now appearing are the likes of Shal Marshall, Lyrikal and the divine Destra Garcia. All of them do very well, as does Jaiga, who also appears, but for the Wildness Riddim, there is 'nothing sweeter' than Rupee's cavity causing MAMMOTH 'Nothing Sweeter' which originally introduced this track to the world. A very nice release! 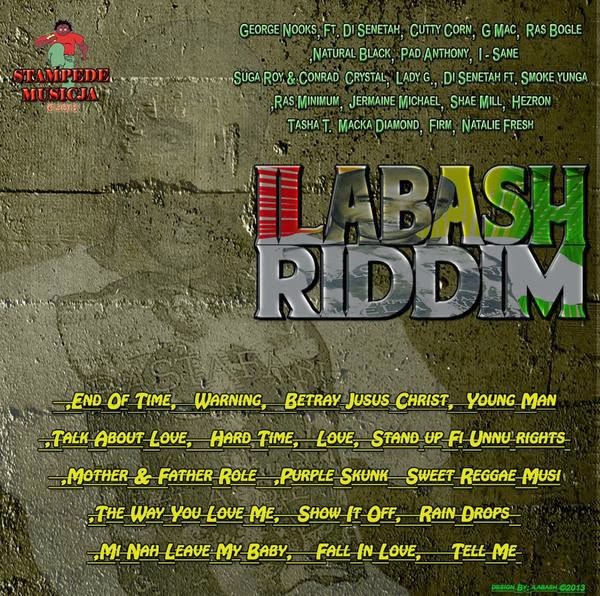 
Biggup Stampede Music who gets as much of my attention for their selection of artists as they do for their excellent old school vibed composition, the Ilabash Riddim. On paper, the biggest name here is probably Macka Diamond, but she's joined by a BEAUTIFUL group of vocalists which features Hezron, Natural Black, Pad Anthony, Cutty Corn, Hawkeye, the great George Nooks and even Lady G. Not all of them work magic here, but in full the Ilabash Riddim is lovely and well worth a closer look. Check it out. 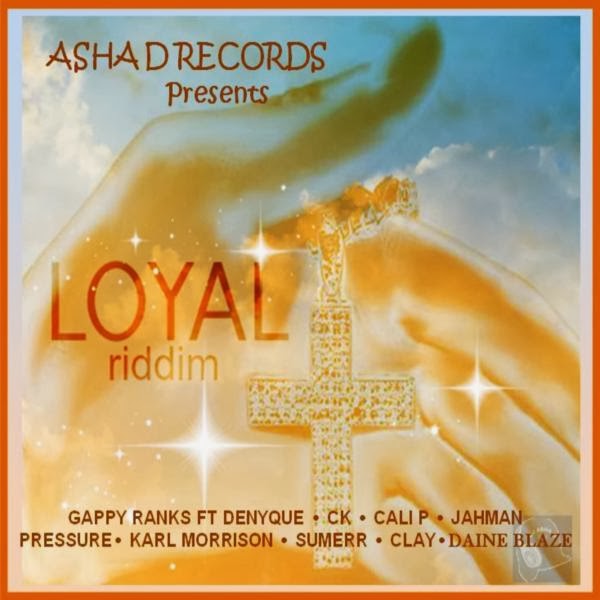 
As sweet singing Ck would hope, when I heard the Loyal Riddim from Asha D Records, it made me smile! It may just be the single best riddim on this post and that fact alone wasn't the only reason. The track actually carries a tune which won me over from last year, by the name of 'First Sight' which is by Gappy Ranks (and is featured on his 2013 album, "Shining Hope") alongside the maybe even sweeter singing Denyque. It is a LOVELY creation and when I saw what they had done with the full roster of names, it was well impressive. Karl Morrison checks in with 'Partner In Crime', which is a fantastic song and we also get tunes from Achis Reggae favourite, Cali P and VI stars, Jahman as well as Pressure Busspipe. A fittingly impressive cast for what is a gold bar of a riddim. 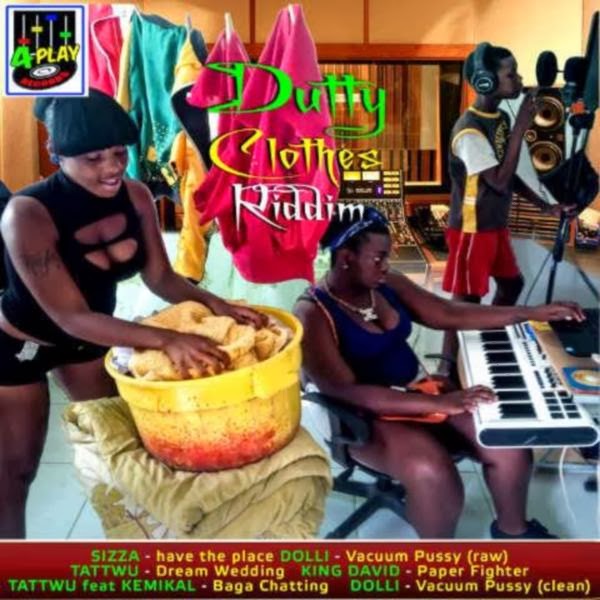 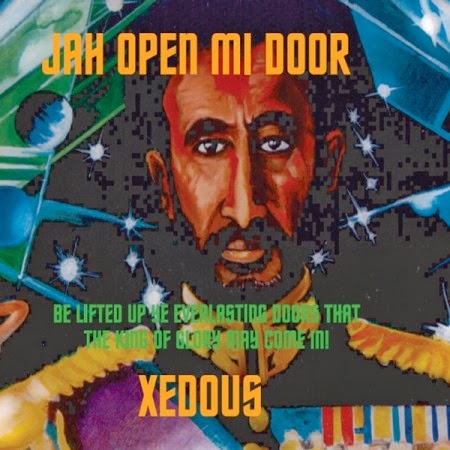 
And finally is a project I haven't really gotten into too much and don't know a whole heap about, but you can beat me to it and see for yourself. Check Xedous (and, now typing it for the third time I see that it's probably pronounced 'exodus' and not 'zedous', as I've been calling him) (… intelligence is just at an all time low in my head) who makes his debut [I THINK] with the new album, "Jah Open Mi Door". Of most interest for my eyes and ears is track #8, 'Every Word', which actually features another Achis Reggae favourite, Ras Batch, who also played a great role in the production of this album. His name is one which virtually guarantees quality and it should play out in that way. Pick it up today and let us know what you think.