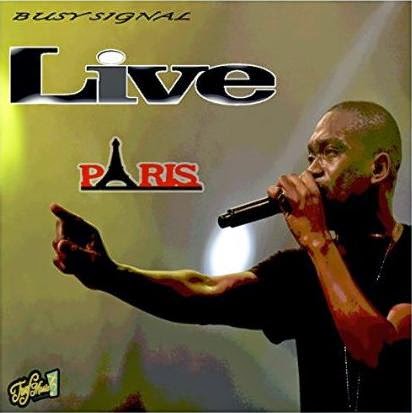 
WHAT! Can you think of the last purely Dancehall OFFICIAL live album that you came across? Over the years we have seen releases from the likes of Sizzla Kalonji, Luciano, Anthony B, Morgan Heritage, Gentleman and others but I cannot recall anyone from a strictly Dancehall set (from the current era) doing such a project. So, we leave it to the genre's most trailblazing and just downright adventurous Busy Signal, as usual, to take the next step and here it is. On his own Turf Music imprint, the DJ now gets set to deliver "Busy Signal: Live In Paris". BOOM! Regardless of how this one turns out (although I do have a good feeling about it), I just LOVE the idea. "Busy Signal: Live In Paris" includes some of Busy's most well known pieces such as 'Reggae Music Again', '2 Much Gun' (called 'Wid Di Gun' here), both 'One More Night' and 'Night Shift' and even 'Bumaye' (biggup Major Lazer). A sterling idea and, again, leave it to someone who definitely isn't afraid to take chances and (at least hopefully) set a new trend. 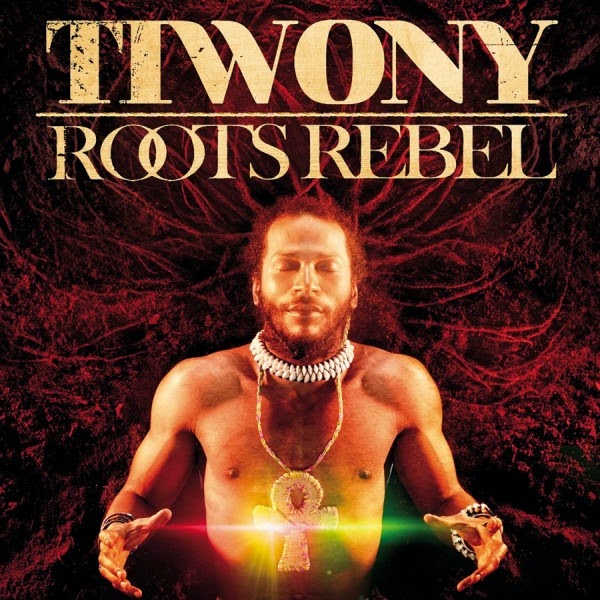 "Roots Rebel" by Tiwony [7 Seals Records]
BOOM! BREAK SOMETHING! Here is ANOTHER giant deal as returning with a brand new album (which, I think, would be his fourth solo project) is Achis Reggae favourite, Gwada flame thrower Tiwony, who is readying "Roots Rebel" along with the very respectable 7 Seals Records. Just last year that same label would bring forth the very solid debut album from Trinidadian chanter, Jah Defender, "Rastaman Rise" (on which Tiwony featured) and they've carried things over into 2014 in a major way. As I've said in the past, as Reggae exists today, Tiwony is easily one of the genre's most talented stars and a new album from him is another strong boost for a big year. "Roots Rebel" also features some very big accompanying talents such as Turbulence, Takana Zion, the late Bunny Rugs, former Tiwony Double Trouble partner, Féfé Typical, Straïka D and even sweet singing Goldee. DAMN! 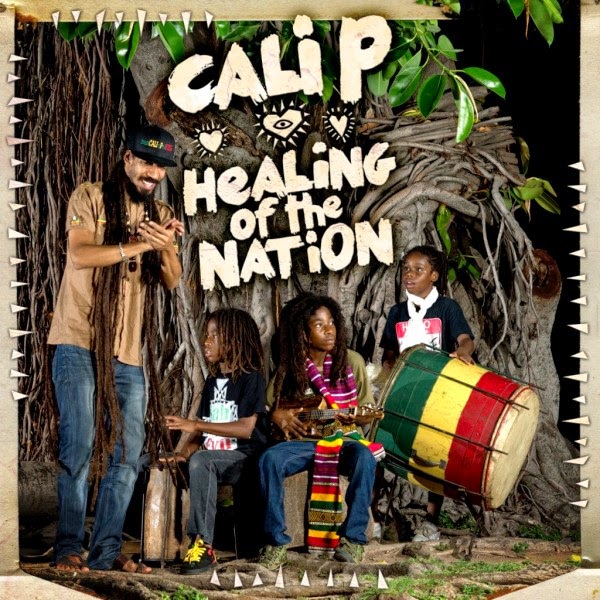 "Healing Of The Nation" by Cali P [Hemp Higher Productions]


Another of our favourites, the always outstanding Cali P (coincidentally, I've been playing a big tune of Cali P's, 'Jah Rule The World', virtually non-stop over the past couple of days or so) ["MY PEOPLE REJOICE AND SHOUT IT OUT LOUD - JAH RULE THE WORLD!"] [BOOM!] also has a big project in the works for next month as the chanter becomes the latest in a wonderfully increasingly long line of names to go the route of pushing a new EP release, "Healing Of The Nation". The new set once again finds Cali P teaming up with Riga and Hemp Higher Productions but unlike previous HH releases, "Healing Of The Nation" at least appears to be on the slower, Roots side which should take us back to the days of the dazzling "Lyrical Faya" album. However, it should be worth mentioning that just three years ago, Cali P and Riga also delivered the stirring "Unstoppable" and, there (and over and over again throughout the recent years), the pair have showed that WHATEVER they get together on should be BIG and I'm not at all expecting "Healing Of The Nation" to be the exception. 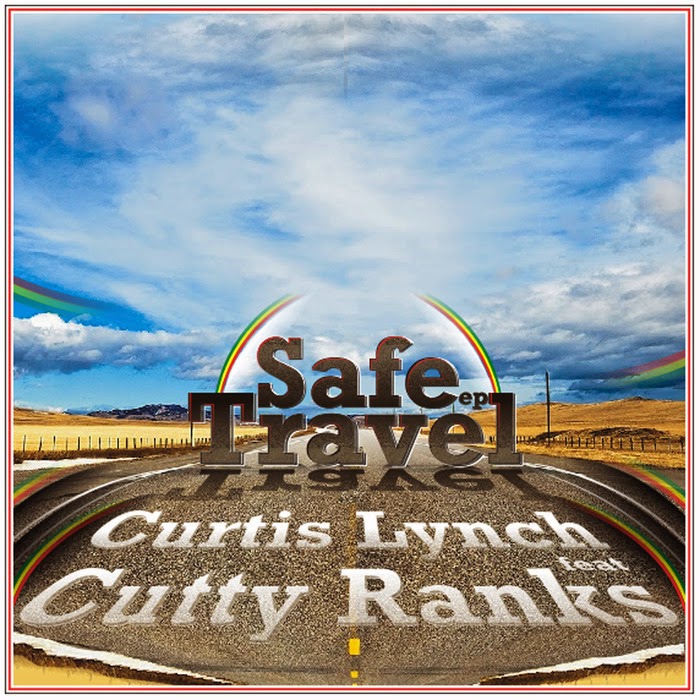 
Also taking the EP route is the seemingly indomitable Cutty Ranks who, at least on paper, has found a very fitting link in the form of Curtis Lynch and Necessary Mayhem. I've never at all been the biggest fan of Cutty Ranks' but I have to say that when I first saw "Safe Travel" I got excited. NM's style of turning up with old-school vibed Dancehall tracks (check the new Strawberry Jam Riddim, in stores now) should match Cutty's style well and, for whatever it is worth, I'm actually expecting this one to be quite decent. 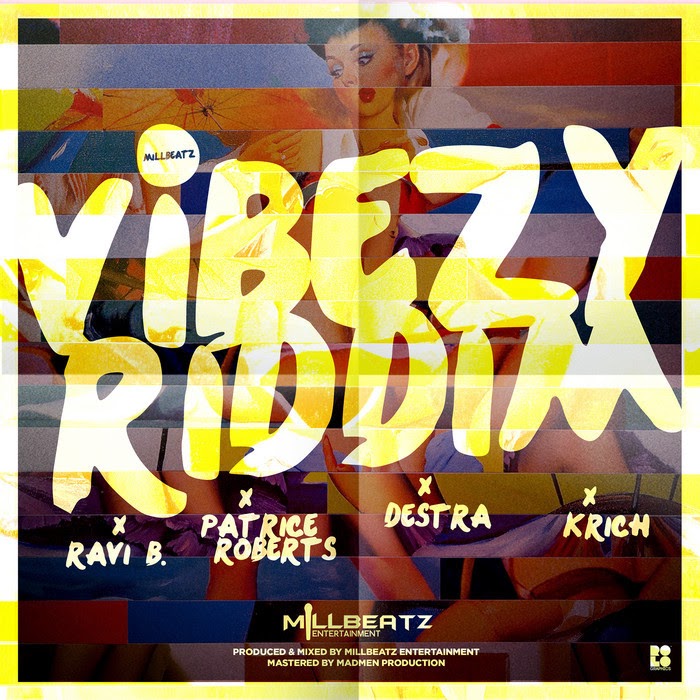 
And you cannot possibly have an edition of Coming Soon without at least one contribution from Fox Fuse and here it is (it'll probably be two actually) because I didn't at all realize that the Vibezy Riddim was that track that… backed that song… that I LOVE. "That song" is Patrice Roberts' downright golden 'Colours'. I probably should hesitate in calling it one of my favourite Roberts' songs ever but the fact that such a thing even entered my mind should tell you about my affections for it. It is BEAUTIFUL! Fortunately, the Millbeatz Entertainment constructed piece also features a few other things you might like as well. Namely, there's 'In The Band' by the incomparable Destra Garcia, but we also get nice tunes from both K-Rich and Ravi B (whose 'Flowing' is damn strong). FF and Millbeatz were also nice enough to include an instrumental - altogether making for a release which should be exceptional. 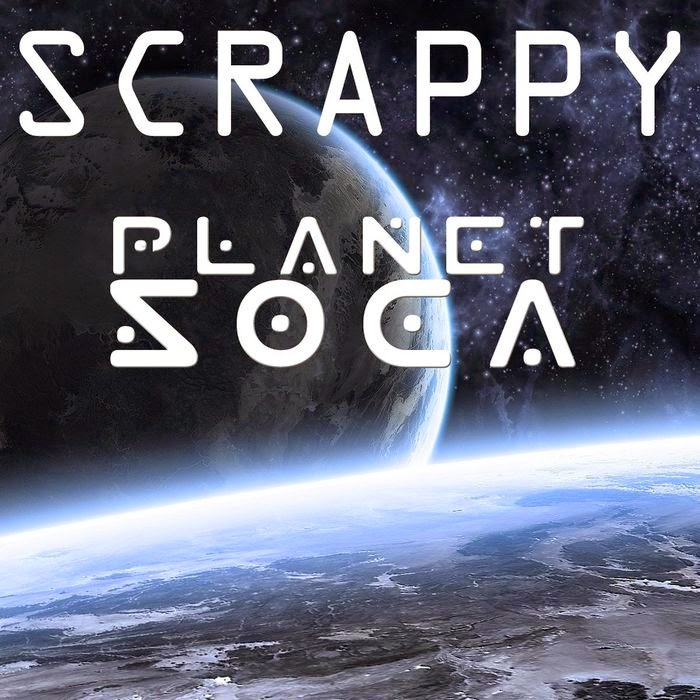 
Biggup Scrappy from out of Montserrat (or "Monster Rat" as my Daughter calls it) for consistently making us aware that Faluma is still around. The label which isn't nearly as active these days as it used to be always finds time for Scrappy's releases and next up from Scooby's nephew is "Planet Soca". As his releases generally do, this set offers an opportunity to catch up with Scrappy and hear what he's been up to. What he has been up to, most notably, has been 'Start De Bakanal' which is my favourite 2014 song of his and appears on "Planet Soca" in two mixes. Also well worth checking out is 'Not Going Home' and a few others. Scrappy's album constantly come in on a very solid level and if you've never taken the time to listen to his work, "Planet Soca" should be a very good time for that. Check it out. 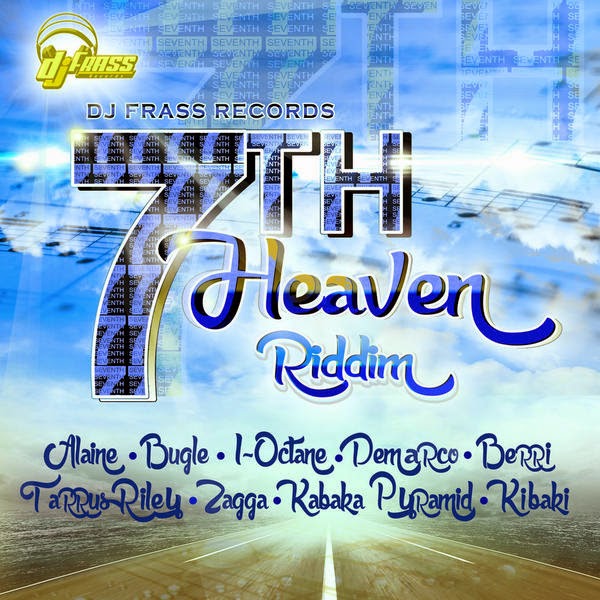 
If you're looking for something to brighten up your listening habits these days, something which is absolutely perfect for you should be the SHINING latest release from DJ Frass, the aptly titled 7th Heaven Riddim. LOVELY! The 7th Heaven certainly is one of Frass' greatest recent compositions and it echoes of some of the softer material you heard coming from the great Don Corleon years ago. Coincidentally, as was the case on much of that work, leading the way here, without a doubt, is Alaine whose 'Make It Home Again' is full-on masterful (and makes it even harder to wait for her new album which was due to drop last week but is now slated for FEBRUARY!). Making the best of the ruins Alaine lays is Bugle with 'Survivor' but not far behind are big names such as Tarrus Riley, I-Octane, Kabaka Pyramid and others. But do not mistake it, Alaine reigns supreme here and when you heard it and saw her name on it, you knew she would. 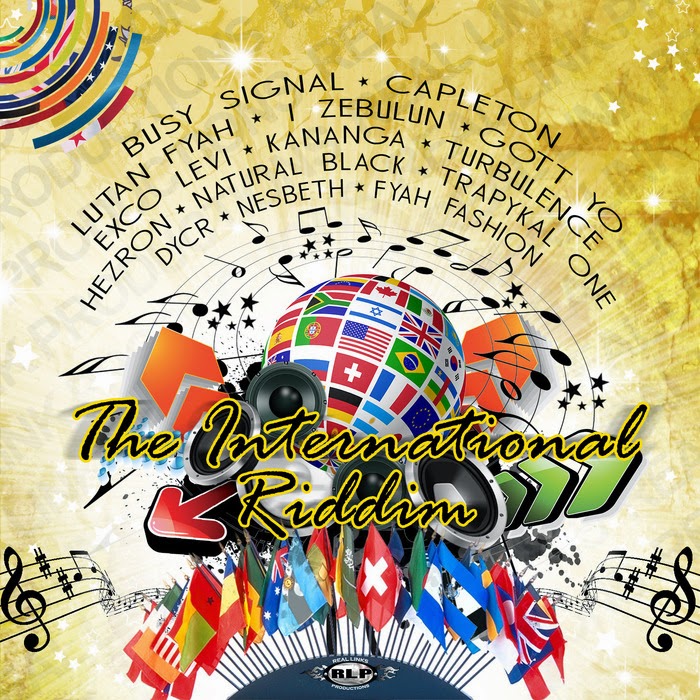 
Another big credit goes out this month to Real Links Productions for FINALLY delivering one of our favourites across the past couple of months or so in a full and official manner, the International Riddim. The composition here is a stirring one. With kind of a building momentum, the International Riddim is all kinds of infectious and RLP does well in placing it in some equally tremendous and capable hands. The aforementioned Busy Signal does his typically unpredictable brilliance with 'Lonely' and he is joined by Capleton, Lutan Fyah, Turbulence, Hezron, Exco Levi, Natural Black, Nesbeth and others. If you wanted to call this one - one of the stronger riddim albums of the year, you wouldn’t catch too much of a fight from me. This one was excellent.

Digital
[Note: We've found multiple examples of the track listing for this one being incorrect on digital retailers, so be careful and listen to the clips before you purchase a single song you don't want] 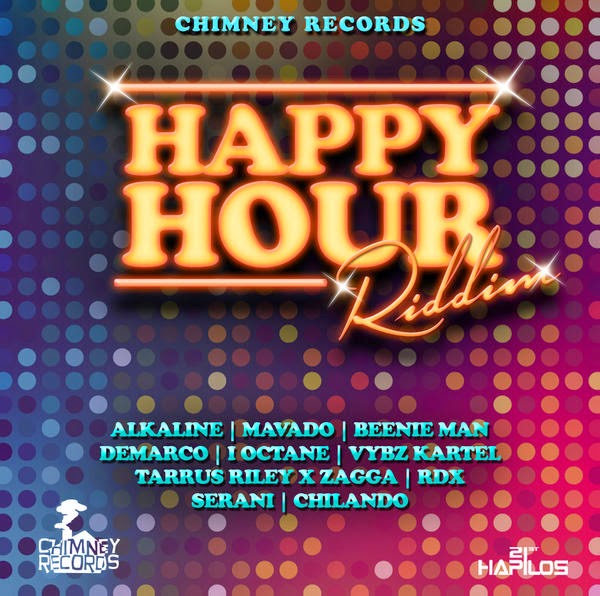 We can always make more room for Chimney Records and we're doing it here with their latest, the Happy Hour Riddim (biggup Mikey Spice). This bouncingly colourful piece is a tough one! Even if you don't like every song on it (and you won't), the actual riddim STAYS WITH YOU. It refuses to let you go! Fortunately, when it comes to the vocalist, it definitely isn't a lost with names such as Beenie Man, I-Octane, Tarrus Riley (alongside Zagga), Kartel and Alkaline (with the hilarious 'A Bagga Tings') leading the pack. 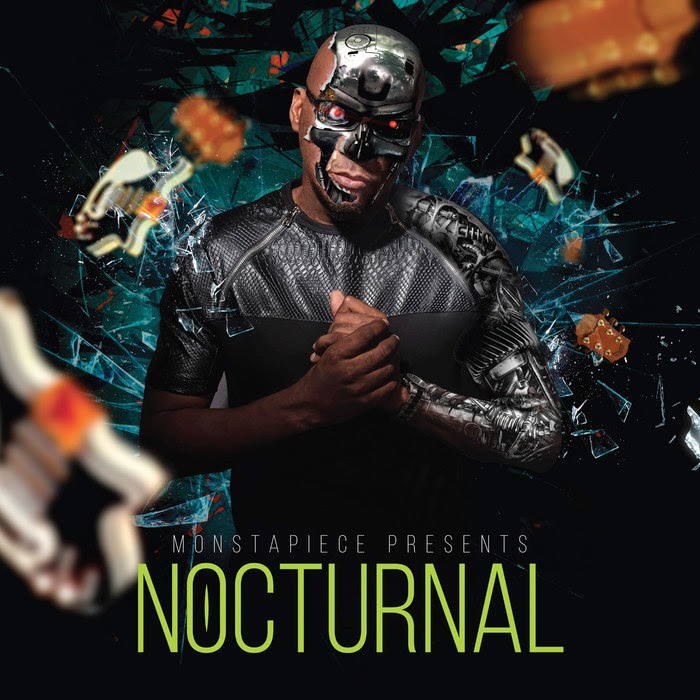 
And lastly this week, the latest to sign up with the wonderful people at Fox Fuse is the giant Monstapiece who is well known for delivering equally sprawling annual compilations and here is their new release for 2014, "Nocturnal". As usual, this album is a lot of fun and, through fifteen tracks, it features contributions from the expected likes of Edwin Yearwood (twice), Alison Hinds, Lil' Rick, Peter Ram (thrice) and Khiomal Nurse as well as a few surprises such as songs from Konshens (with Fadda Fox) and Mr. Killa. If you like Soca music, particularly of a groovier and smoother variety, this album should work well for you - it always does.

Digital
Posted by Achis at 5:58 PM