"Healing Of The Nation" by Cali P!

Still unstoppable. It seems as if, these days, every piece of musical news which reaches makes me smile. 2014 has been a SPECTACULAR year for Reggae in my opinion and, even as it enters its final couple of months and people like You and I begin to attempt to place it in some type of historical context, it continues to serve up downright delicious moments. The latest? I was under the impression that the next time we were to hear from Achis Reggae favourite, Cali P, in any full capacity it would be in the form of an album directed by the legendary Bobby Digital and while that set figures to still be in the works, until then the richly gifted chanter has given his fans something very special for 2014, "Healing Of The Nation". Cali P becomes the latest in an increasingly long line of talented names to do a very extensive EP -- and with NINE tracks, it almost seems like an album of its own -- and he does so on very familiar terrain, once again reuniting with Riga and company at Hemp Higher. Unlike much of their high-tech and high-powered work together, "Healing Of The Nation" is sublime modern Roots Reggae which is might from beginning to end. So, we thought that we'd give you the full breakdown and today take a look at a release which is going to lay a significant claim as the best EP that Reggae music has produced in 2014, "Healing Of The Nation" by Cali P.

Before he takes you on the journey of "Healing Of The Nation", Cali P takes you directly to his doorstep and introduces you to Mother and makes you feel at home on the GORGEOUS 'My Home'. This song is one just giving a hefty praise to Mama Africa and, though you've heard quite a few tunes like this in Reggae music (it is one of the most prevailing topics in the genre), I like to think that this one is unique, not only in its sound but in its direction as well. This isn't a song about packing up and picking up everything heading HOME - it is one about taking HOME with you wherever you go and representing Her to the best of your ability. Going further, Cali P does some really interesting things lyrically in the song, such as allowing for mistakes that people may make in their life but ultimately he presents Africa as a wonderful place and one which serves as a never-ending source of pride and honour for all of Her children.

"What a joy when I walk and see, whoa Mama
Africa is my place and that is where I want to be
Love and miss Africa, wherever I may be
SOME CARE ZERO, STILL THERE IS EVERYTHING TO ME"

Grrrr! On 'Wha Gwaan' Cali P brings forth a bit of FIRE and BITE on the tune which is, essentially, an autobiography of how he came to be who he is in the music, going from his childhood to his current stages and all the things that he has accomplished in his career. What I most like about this one, along with the vibes, is how he addresses pretty much everything that you can think of. He goes to tracing his beginnings and his inspirations ["The day mi light mi first spliff, Babylon get bun"], through all the people who tried to take him off course and those, like Half Pint, who gave him encouragement throughout the years as well. You might not think so if you were to only give it a cursory listen, but digging any deeper into 'Wha Gwaan' reveals it as a very personal track and one on which Cali P absolutely blazes!

I suppose we can call 'Bed of Roses' a "life commentary" because I think that, at its core, it is really a piece about treating people better than we do now and attempting to make more of effort in helping each and everyone through life as best as we can. He goes through different things such as being thankful and APPRECIATING WHAT YOU HAVE IN LIFE [!] as well as setting a proper example for the younger generations as well. This is a very fascinating tune and it is also carried by a more than solid backdrop (there's a guitar in there somewhere which is subtle but fully intoxicating to my ears) so be sure to lay down fully in this bed (don't just sit down and take your shoes off!).

Given its title, 'Solution' was a track which well had my attention even before I heard it and it kind of loosely relates to the song before it in my opinion as it also deals with finding a better way to treat people, particularly those who don't have it as well as you might. The first verse on this song may just be one of the best that I've heard… from anyone in 2014:

BOOM! The entire song stays at a similar lyrically prodigious level and it makes, ultimately, for one of the best songs on the whole of "Healing Of The Nation" and one of my recent favourites, altogether, from Cali P.

TEARS! I do love the 'Solution', big tune, big lyrics and big vibes but it, like everything else on "Healing Of The Nation" is going for second place on the EP because the single best selection I hear here, without a doubt, is the MAMMOTH 'I Am Bless'. This song brought an even bigger smile to my face the first time I heard it and I've now listened well over forty times and I'm still smiling! On this composition Cali P speaks about being goal-oriented and receiving your blessings in life and not allowing anyone to step in front of either path. He wraps the crucial message in a GIANT package and pushes straight into the minds of the listeners - the rest of whom, hopefully, love it as much as I do because I think the song could be a definite hit if it got the opportunity to shine.

"So mi tell di negative people fi low mi
NONE A UNUH GROW MI
NONE A UNUH KNOW MI
All unuh do is telling people stories
GWAN LIKE UNUH HOLY
AND PLASTIC LIVITY YOU SHOW MI!
A so mi know some seh dem love but dem no real
Through time, everything reveal
And through wi strong like lion and tougher than steel
WI AND DEM NO DEH PON DI SAME BATTLEFIELD!

Jah Jah give me health and protection
So, mi no fraid of no Pagan
No dutty heart can take weh mi life cause I'm blessed by The Most High

I had to spend a little more time on 'One Step' because it really requires a little more attention in my opinion. My reward for doing that was another incredible effort for "Healing Of The Nation". In Reggae music we hear people giving thanks and giving praises to so many different entities and things in general and that's what happens on 'One Step' as well but in this case, Cali P is really just giving thanks for all of the wonderful and NICE people in the world (and even those who're no longer with us). That's a subtle but very unique spin on another very often visited topic in the genre and it is also something which, hopefully, everyone can relate to as well because everybody has SOMEBODY they can depend on (even if your "SOMEBODY" is a dog or a cat, SOMEONE loves you and is nice to you!). Also have to give a big credit to the musicians here, especially a saxophone player (I think that's a saxophone) who dazzles.

In next is 'Carry The Load' from Kheilstone which is an all-encompassing social commentary with a prevailing spiritual and it is CANDY for your ears. This is another highlight on the project to my opinion and while it, like with its predecessor, took me a minute to arrive at that conclusion, it is no less true. Cali P talks about so many of the ills of the world and society and how many of those negative forces can keep people from enjoying their lives and achieving their goals. But he also goes on to offer a constant relief and aid in the tough times, The Almighty, which is very interesting because later on in the song he even starts to incorporate 'extensions' of His Majesty and how useful they can also be, such as the music.

A golden song which ends with a bit of instrumental which… I would have had no problem at all with if they just let play on!

Cali P seeks strength in numbers on 'United We Stand' to fight against the wicked and he finds it with a big offering. The first thing here which is going to get your attention is the riddim. It sounds like something from an era gone by for the most part but it later develops into this lovely digital track which may be the single best on this release. For his part, Cali P pushes a message outlining not only so many of the horrible things that occur but he also seeks a common ground with his listeners by outlining just as many different things that we can all do to stand up against the atrocities. And, again, this song is a JOY to listen to and it appears that the chanter welcomed the moment with much of the vibes of the song being loose, free-flowing and well fitting. BOOM!

Ending matters on "Healing Of The Nation" the EP is the eponymous selection which places a beautiful bow on the project named after it. What is Cali P's notion of the healing? You just heard it. This is a song about celebrating all of the wonderful music in the world. The song has a very BIG feel to it but it is on a level which firmly has both feet planted on the ground. It's all about how music can affect your life and MAKE YOU FEEL GOOD and really just put you in a nice frame of mind. And, for me, obviously I use music for a variety of different things (I used to play music for my Wife's plants) (and you can laugh at me if you want, I don't care! I know they liked it!) because it is one of the most powerful forces on Earth. "So”:

"LET THEIR BE VIBES!" 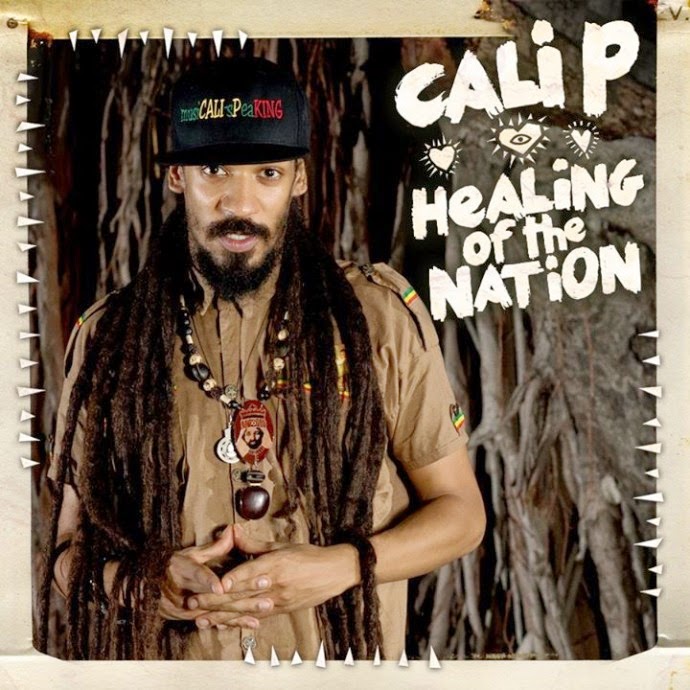 In general, I think that one of the main points which is ever-present on the EP is the notion that the 'healing of the nation' first and foremost, is AVAILABLE. You do not have to go to another planet to find it and you don’t have wait for it to fall out of the sky. All you need to do is receive it and, most importantly, when you do receive it DO NOT TAKE IT FOR GRANTED AND APPRECIATE IT! You, YOU SITTING RIGHT THERE can also show some love and appreciation when you pick up one of the best Reggae EP’s of the year, "Healing Of The Nation" by Cali P, which is in stores now. WHAT! BOOM!
Posted by Achis at 8:34 PM