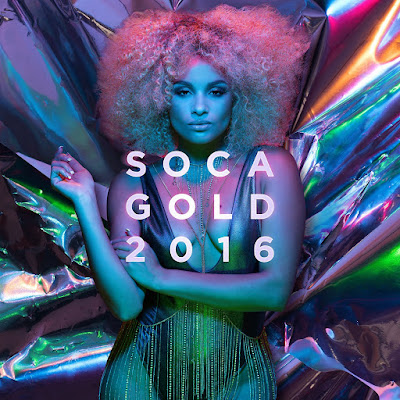 So, look what time it is. Once again VP Records rolls out what is likely still the #1 compilation in all of Soca music, "Soca Gold" (although "We Musik" had been doing big, big things in my opinion). As usual, we always look forward to the release and, despite not really liking what the genre has produced this year, 2016's edition is no different. Again, despite not having much to choose from, I'm not entirely disappointed with what this years "SG" has to offer early on,

Just on paper, big names such as Machel Montano, Bunji Garlin, Fay-Ann Lyons, Patrice Roberts, Skinny Fabulous, Problem Child and others make appearances which is certainly not a bad thing, even considering that only one of them bring my personal favourite of their recent selections. And "SG2016" also features, WONDERFULLY, a song that definitely was a recent highlight for me, the gold bar that was 'Allez' from St. Lucian all star Teddyson John.

Aside from that, the aforementioned Aza Sefu does deliver in a major way with what is the best song on this album to my opinion, 'Hands In The Air' (I don't know the name of the Stadic & Wetty Beatz track which underpins it, but it is the same which backed the MASSIVE 'Done' from Icon as well) and "SG2016" also features solid input from the likes of Ricardo Drue (who has been as reliable as almost anyone in the genre recently in my opinion), Peter Ram, Statement and a big combination featuring Giselle The Wassy One and,  of course, series posterboy Edwin Yearwood (I've been listening to 'Chrissening', for absolutely no reason at all, ENDLESSLY as of late).

Of course, the physical release of the album also includes a DVD packed with... what you usually expect it to be packed with. And even important-er is that this year's cover is gorgeous! Take a closer look for yourself when "Soca Gold 2016" from VP Records arrives in stores on June 24th.

{Note: Obviously the tracklist can change at anytime before the album is actually released - and if it does, don't blame me. ... You can blame me if you want, I don't care}
Posted by Achis at 1:39 AM