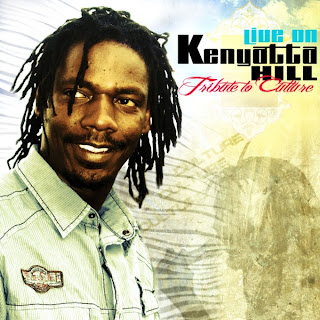 Kenyatta Hill - “Live On: Tribute To Culture” [Rymshot Productions/Zojak Worldwide]
Alright! So in case you didn’t notice, I also did one of these last week and I would have been perfectly content to let it roll by this week (because I also did a ‘Check It’) were it not for the fact that we have an album on the way which is, in my opinion, a pretty big deal and I’ve yet to talk about it. It’s been more than four years now since legendary Reggae singer Joseph Hill of the might group, Culture, made his transition and since then his son, Kenyatta Hill, has fronted the group with which his legendary Father sang. In 2007 there was an album, ”Pass The Torch” (which was very good actually) which featured both Father and son singing songs, but now Kenyatta takes the spotlight full-on, but with Joseph clearly in ‘proper viewing angle’ on a tribute to his father and the group, ”Live On”, which features Kenyatta singing the great tunes from Culture. He takes on legendary tunes such as ‘International Herb’, ‘Two Sevens Clash’, ‘Iron Sharpen Iron’ and others and he does so, most interestingly, under the direction of one of the best in the business, VI Reggae genius Dean Pond, whose Rymshot Productions helms the board on this very very interesting release.
Potential Rating: 4.999999/5
Releases on February 8
Digital (and most likely CD) 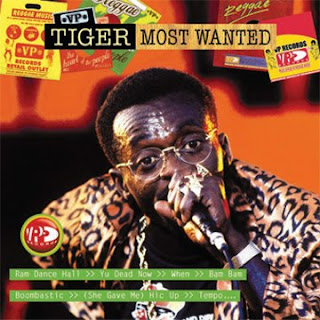 Next up is another tribute of sorts as VP Records (having blatantly STOLEN the series from Greensleeves) (themselves) serve up the first installation of ”Most Wanted” in about a year (Chukki Star) from the once mighty often imitated, but never duplicated Tiger. While sometimes I don’t care much for this series (because in offering up greatest hits for the likes of Bushman and Vybz Kartel, you aren’t really digging too far, but I think that as such was the case with Johnny Osbourne and maybe even the Wailing Souls, this is a very good idea. Through the course of his career, record shelves aren’t exactly brimming with material from Tiger and pretty much anything at this point is a boost, particularly when it comes from his prime years and big fans and collectors alike might be eager to get their paws on this set which includes songs such as ’Bam Bam’, ’When’, ’Ram Dancehall’ and my personal favourite ’Yu Dead Now’.
Potential Rating: 4.5/5
Releases on March 8
CD + Digital 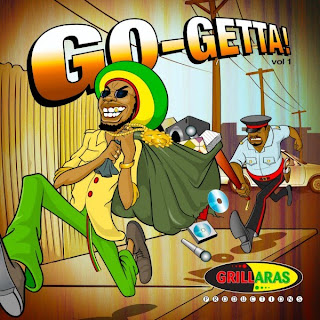 The Go Getta Riddim [Grillaras Productions/Zojak Worldwide]
Grillaras is a label who I always look forward to hearing from and I was rather pleasantly surprised to see that they were bringing forth a brand new riddim album (more like an EP with seven original tracks) for the Go Getta Riddim. For the TRULY hardcore heads, you may very well remember this one from the title track tune from UT Ras on his wicked debut album ”Tha Bitter Stretch”, just a few years back. Of course that tune is on board and Ras is joined by the likes of Luciano, Natty King, Robert Ffrench and veteran singer Courtney Melody on this very solid release.
Potential Rating: 4/5
Releases Soon
Digital 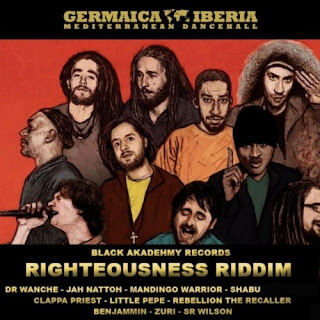 The Righteousness Riddim [Germaica]
While I’m well more looking forward to their Question Riddim which I told you about last week, Germaica is also serving up (on the same day actually) a nice and kind of ‘funky’ Roots Reggae piece, the Righteousness Riddim, which obviously has some pretty large and glaring Spanish ties. I believe the riddim may’ve actually been built in Spain by Black Akadehmy (who I’ve never heard of before) and it’s also voiced by Spanish artists such as Shabu, Jah Nattoh, Little Pepe and others, but you know I’m rather fixated on ‘Cool’ from the ultra versatile, Rebellion The Recaller. The always fun Mandingo Warrior also adds a bit of combustion on this pretty nice sounding riddim which hopefully is turned over to the rest of the world at some point.
Potential Rating: 3.5/5
Releases on January 28
Digital 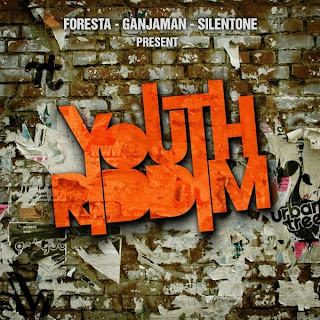 The Youth Riddim [Urban Tree Music]
The Youth Riddim from German (I THINK) label, Urban Tree Music, is one which has been listed in the ‘Coming Soon’ category for quite some time now, but it appears as if it’s actually going to pushed through this time. I’ve already had a pretty large taste of this one (and you can too, because it’s on Juno) and I’m well impressed as of yet and on top of that, now we get to see the full tracklist roll in and I’m even more interested. Black Dillinger highlights a group of vocalists which also includes Smiley, Junior King, Vido Jelashe, Uwe Banton, Cornadoor and Jennifer Washington.
Potential Rating: 4.25/5
Releases on February 8
Digital (maybe CD)
{Note: Apparently they’re doing two versions of this one with one being the ‘Germany Edition’ and another being the ‘World Edition’ - The latter simply lacks six tunes done by German artists in German - Pretty good idea in my opinion actually} 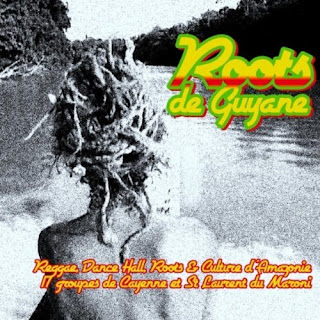 Finally for coming soon this week we have a release from Transportation Label which I think is pretty damn important, ”Roots De Guyane”. The album is a compilation which apparently features some of the more popular Reggae talents from out of Guyane and that’s a pretty good idea in my opinion as shining a light on the music business in the area (outside of Zouk of course) is probably loooooooooong overdue in this case. There’re a few names here which I recognize such as the Energy Crew, Prince Koloni, Chris Combette and maybe even Sista Rudo (and of course there’s Luciano who manages to throw himself in as well). But all in all it just seems like a really attractive project and a big opportunity to get ‘educquainted’ as well. 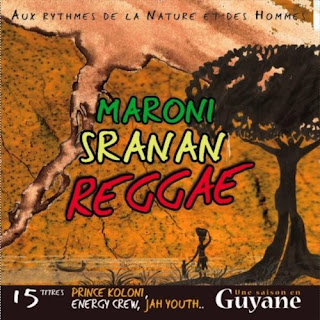 “Maroni Sranan Reggae” [Transportation Label]
And you can consider this one a bonus because it appears to be, essentially, very similar to the piece I just told you about and from the very same Transportation Label as well (I actually probably should’ve put them together but, I’m entirely too lazy to do that now). ”Maroni Sranan Reggae” features a lot of the same cast of characters as ”Roots De Guyane”, but check out the likes of Daddy Happy, the always entertaining King MO, Little Guerrier (more on him in a bit) . . . Oh and Lady Sweety (yes Nico, Lady Sweety) who joins the Energy Crew on the album’s closer, ‘Hey Muchacho’.
Potential Rating: 4/5
Releases on February 1
Digital 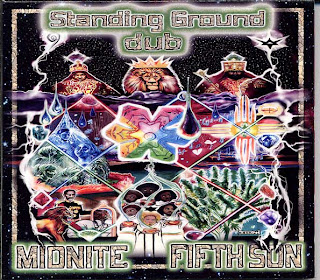 Midnite - “Standing Ground Dub” [Fifth Son Records/Zojak Worldwide]
In typical Midnite/Vaughn Benjamin fashion, it’s not even the end of January and they now have two albums out as the recently released and much discussed ”Treasure” from Rastar & VP wasn’t even the first, but it followed a dubbed out version of ‘their’ 2008 album, for Fifth Son Records, “Standing Ground”. That initial release was also talked about quite a bit because it was a double release, however, for its dub, it’s been slimmed down to a still nice single disc and thirteen tracks. It’s been awhile since I dealt with that album so I kind of had to go back and refresh my mind, but as usual, Midnite’s music (regardless of who’s producing it) transfers well to Dub if you really like HEAVY old-school vibed Dub and I’m sure their hardcore fans are eating this one up. 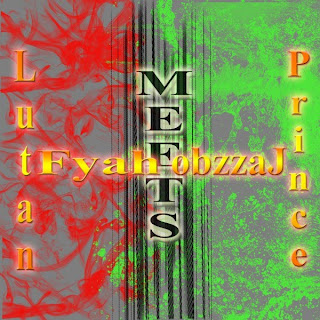 “Lutan Fyah Meets Prince Jazzbo” [Prince Jazzbo/Ujama Music/Zojak Worldwide]
If you didn’t happen to pick up Lutan Fyah’s 2009 album ”Rising Up” (and you didn’t, because it was never released) and if you didn’t stumble upon that compilation which contained EVERY song from the album (and you didn’t, because you forgot its name) then you may want to get a hold of this piece produced by VETERAN Prince Jazzbo, ”Lutan Fyah Meets Prince Jazzbo” because it contains a nice amount of the tunes on that decent album. Jazzbo ‘chases’ the Fyah’s tunes with his own tracks and while I’ve never been too much of a fan of Jazzbo as a vocalist, he does do nice things on this release.
Digital 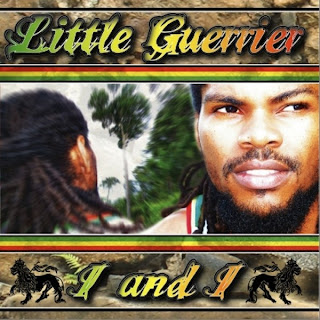 Little Guerrier - “I And I” [Transportation Label]

I’m going to assume that ”I And I” is the latest album release from a most impressive young artist from out of Guyane, Little Guerrier for Transportation Label, because I can’t find a thing about it anywhere. Whatever it is, however, it’s definitely his most visible project to date and a pretty good time for the rest of the world to learn about the exuberant chanter. This release does include what I believe to be his most recognizable tune to date, ‘Black Woman’, from a few years back (still a LOVELY LOVELY tune to my opinion) as well as a track, ‘Neva’, over the iLove Riddim from Rootdown Records and there’s also ‘Beautiful Day’, a big combination alongside the aforementioned Prince Koloni. Definitely think strongly about picking this one up.
Digital (Maybe CD) 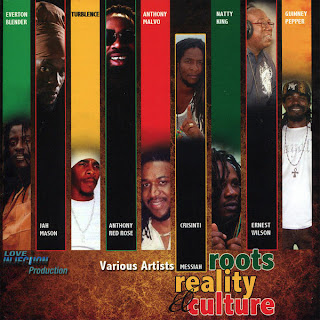 “Roots, Reality & Culture” [Love Injection Productions]
Love Injection Productions is a label I tend to keep an eye out for, largely because they dropped a pretty good album from Turbulence a few years back, ”Words of Wisdom”, that I liked and still do just a bit actually (there was also a followup to that album - but we don’t talk about that anymore). So when I saw that they had released a new compilation (and a new album which I should probably also mention, but I’ll save it for next time) (or the time after that), ”Roots, Reality & Culture”, I thought that it’d be nice to mention. Yes, the title is TRULY horrible, but not all of the music is and with a roster like Jah Mason, Turbulence, Everton Blender, Natty King and Chrisinti, things can’t be too bad here.
CD + Digital 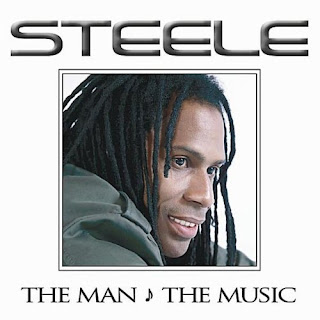 And finally, I noticed that an album I dealt with almost exactly a year ago, ”The Man, The Music” from the impressive Canadian based singer, Steele, had made it to the digital market, thus giving me another opportunity to mention it again. While I won’t spend too much time on it again, this is a very solid release and is well recommended to fans of modern Roots Reggae and Lover’s Rock as well as Steele does his thing over some big vibes, including a lot of help from the people at Joe Fraser Records.
CD + Digital
{See Review}
Posted by Achis at 12:09 AM