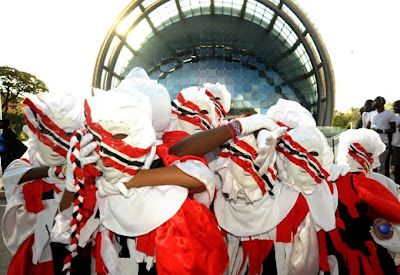 Okay so, if you haven’t been paying any attention (and you haven’t), wonderfully, Trinidad has begun to do what it does around this time every year - Erupt with amazing vibes and as usual, we’ve been listening and enjoying the madness and in a few weeks’ time, we’ll take an even closer and more hands-on look. Until then however, I thought that I’d make a mention of just a few of the big personal highlights for me as I recall just how perfectly and thankfully easy to please I am when it comes to Soca this time of year.

‘Come To Meh’ by Iwer George
First up we have what is definitely the biggest surprise on this list as Iwer George, who I’ve grown to dislike more and more over the last couple of years or so (musically speaking of course, I’m sure he’s a wonderful and upstanding individual), dropped ’Come To Meh’. This song is MAD! ‘The Boss’ has apparently been bitten by the jab jab bug because he’s ready to leave Trinidad altogether, move to Grenada (where the Jab Jab resides) and look for a Jab Jab job. If it all sounds this good (and it doesn't) and I can find a good one, I’ll be going too.

‘Hard Wuk’ by Machel Montano
Up next is Machel Montano who, to the surprise of absolutely no one, is labeling his 2011 season ‘The Return’ after a largely absent 2010. After releasing a few nice pieces (like ‘Spin Class’) he’s upping the ante with his latest release, which may actually be his BIG song of the year (although I doubt it), ‘Hard Wuk’. On first listen I thought this one largely unspectacular, although pretty decent, but I think I’m starting to come around just a little bit more and I cannot wait to see what HD has planned for 2011.

‘Carnival Jumbie’ by Blaxx
Perennial favourite Blaxx, after dealing what has to be his big hope of the year, ‘Trouble’, returns with this absolutely delightful piece, ‘Carnival Jumbie’. This one is certainly nothing special to my ears, but it’s just a nice kind of Groovy-ish piece (which, hopefully, he won’t attempt to qualify for Monarch this year) for Blaxx who, despite not getting the prevailing level of recognition of some of his peers, continues, year after year, to show himself one of Soca’s most consistent of champions.

‘Go Home’ by Bunji Garlin & Fay-Ann Lyons
The first couple of Soca, Mr. & Mrs. Ian Alvarez have linked up in 2011 for a tune in ‘Go Home [If You Cyah Tek It]’ which is sort of strange to my ears. First of all, the vibes of this one - and I’ll defer to someone who knows a great deal more than I do - It’s more of a Bouyon tune than a Soca piece. Second of all, CLEARLY it was developed for their live shows together so if you don’t like it (and you might not, reading various opinions, a lot of people aren’t too crazy about it, although I really like it) (again, I’m not easy to please), you might want to reserve judgment until you get a chance to see live and in person.

‘We Not Leaving’ by Nadia Batson & Patrice Roberts
LOVE IT! Patrice Roberts hasn’t exactly been shy in this young season (which hopefully means that she’ll package everything here and some favourites from 2010 and give us an album). She’s been releasing a very steady stream of tunes for a couple of weeks or so now and while I haven’t exactly been too keen on what Nadia Batson has been up to, she’s still one of the highlights of every year for me. So what happens when you link the two? MADNESS! ‘We Not Leaving’ is TOP NOTCH! My daughter loves the tune, I love it and it’s been on a virtual non-stop rotation around here for the better part of the past two days. Take a listen.

‘Madd Party’ by Destra & Skinny Fabulous
And finally, I can firmly call this one ‘entirely too good to be true’ as two of my favorite artists on the planet, regardless of genre, the incomparable Destra Garcia and the maddest, Skinny Fabulous have teamed up and they’re inviting you, me and everyone else to the ‘Madd Party’. I’ll be attending and if you don’t want to go, then I’ll also go in your place as well. I’m utterly and COMPLETELY partial in this case, but this is the funtime of 2011 so far. It combines the kind of LARGE chaotic style of Skinny with the fun on top of fun vibes from Destra and it manages to absolutely DAZZLE the listener.