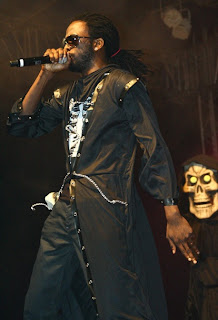 With the 2011 season’s avalanche of tunes already upon us, I thought that I’d reach back, again, and wrap up the year that was 2010 of Soca music by offering up my own personal favourite songs, and strictly songs, of 2010. In retrospect, while certainly not the greatest of years in memory, the collective 2010 Carnival Season did offer up more than its fair share of unforgettable highlights - Of course in the events - and in the music as well. So, with big tunes already jumping up and vying for the inevitable look back at 2011, we prepare a ribbon for the year with The Best Soca Songs of 2010.

{Note: Order of songs reflects no commercial success or lack thereof and is ranked completely on how much I enjoy them}
{Note 2: All songs here may not have actually been released in 2010, but were created for the 2010 season}

#10. ‘In Meh System’ by Jalena [BVI]
Running cool. Here’s a very very familiar song to me as, besides being a highlight and standout tune of the debut album of Tortola Soca star, Jalena, ”The Jam Sessions” (which was full of potential favourites), ’In Meh System’ also highlights and is a standout amongst my ever growing workout playlist which I run, lift and do a lot of crazy other stuff to about five days a week. So, if a song helps me to keep in shape, then you know it had to reach this list. Besides helping my Wife get something REMOTELY decent to look at, ‘In Meh System’ is just a really ‘different’ and pretty magical tune. It’s one of only two definitively GROOVY songs that you’ll find on this list and a bonafide real winner (and “I can feel it, flowing all through my veins”).

Best Lyric: “All dem man dem hold on tight, when di gyal dem bend down low. We wukking it up tonight, everybody jamming so. But tonight’s no fuss, no fight, we liming til early morning. The drinks dem flowing right, this music’s intoxicating”

#9. ‘Tornado’ by Otis [Grenada]
Get in a circle. I can actually remember when I first heard this tune - I’m pretty sure I thought it was fairly gimmicky and actually average when it first began . . . That is until a chorus and subsequent track which is TRULY ridiculous begins and you just lose it! I also remember thinking that ’Tornado’ by Otis wasn’t a great song for Grenada Soca Monarch and then of course Otis out-dueled defending and multiple time Spice Mas Soca Monarch, Mr. Killa by creating a big fucking circle within the crowd. It was obviously perfect for Road March, however, and guess what - It won that two. The most directed of songs on this list also happened to be one of the most addictive as, after just a few spins you begin to engage in a battle of life and death to get it out of your head. Good luck with that.

Best Lyric: “GET IN A CIRCLE AND FORM A TORNADOOOOOOOOOOOOO!”

#8. ‘Chrissening’ by Edwin Yearwood & Krosfyah [Barbados]
Even the sidewalk. I can’t remember a year, from the top of my head, when Bajan Soca superstar Edwin Yearwood might’ve had a tune on a list like such from me and this year, he has two. It’s not due to lack of effort or even a lack of quality (obviously), but I just don’t generally find myself paying attention to him and his wonderful band, Krosfyah a great deal for some reason, but most thankfully, 2010 was different. If it weren’t I likely wouldn’t have been caught by the MONSTER of a wining tune that was ‘Chrissening’. To my opinion, this is the tune on this list which didn’t take a Road March crown which should have because it has that prototypical MADNESS causing infectious sense about it which is PERFECT for the road. And I know that I wasn’t the only person took a special note of it, besides being a clear hit and favourite even outside of Barbados, I’ve had conversations with people who’ve said similar things to ’you know I don’t spin Yearwood much, but that new tune . . .’ - Indeed.

#7. ‘Road Show’ by Patrice Roberts [Trinidad]
You must have stamina. I admit that I’m completely partial (can you be “completely partial”, is that really possible???) because I love Patrice Roberts' music and even when it’s bad (and it never is), I’m going to be happy with it, but to my opinion out of the hundreds of uptempo and POWERFUL Soca songs which reached last year, her ‘Road Show’ was one of the very best and it was just STERLING in general. Patrice is an artist, as you’ll see later, who can play both sides with the more smooth songs and these BIG vibed and structured songs and do so successfully and to the latter, with tunes in her past such as ‘Sway In D Mas’ and others, I can’t say CLEARLY that she’s done one considerably better, or maybe even just a little better than this poundingly BRILLIANT piece of work from 2010.

#6. ‘The King Road’ by Maddzart [St. Vincent]
Royalty. Maddzart definitely caught a hold of something special last year when he wonderfully introduced to the masses ‘The King Road’ which would go on to sweep through Vincy Mas, bringing the artist another Road March title. There’s something about this one (and I’m not just saying this to play off the title of the track) (at least I hope that I’m not) which just has a certain bit of CLASS to it, which isn’t necessarily something people ‘typically’ associate with Soca music, but ‘The King Road’ with its dynamic nature and damn BEAUTY, was one which was paved in gold.

#5. ‘Neighbour’ by Edwin Yearwood & Patrice Roberts [Barbados/Trinidad]
See you there. And just in case you didn’t quite GET what I meant about CLASS in reference to ‘The King Road’, here’s an even more glaring representation as it came BOOMING through not only with two big names on a big big track, but it did so with class and reverence and it was actually ‘message music’ which, again, isn’t something very often associated with the genre. The previously mentioned Patrice Roberts & Edwin Yearwood linked up to go at this outstanding highlight of 2010, ‘Neighbour’, which spoke about the unity and exactly how Carnival and Soca and all of the joy which both so often tend to bring is so crucial and just GOOD for the world. Basically what it did was to really give you a good reason to wine and misbehave and damn it felt good.

Best Lyric: “When we have each other, mix up all with Soca. All of we together, my neighbour forever”

#4. ‘True Lies’ by Fay-Ann Lyons [Trinidad]
The queen’s road. Of course the best of the reigning Queen of Soca music, Fay-Ann Lyons, had to be here and while the defending consecutive Trinidad Road March winner and Soca Monarch failed to take home any hardware with 2010’s effort, from all technical point of views her tune, ‘True Lies’, was MUCH better than its dethroner. I thought (and still think) the song was a bit complicated - It literally sounds like two (or three) different songs wrapped into the span of one - Which is why it may not have seemed as big as her efforts in ‘08 and ‘09, but you need to really listen to this song. I mean REALLY listen to it. What it does is to, essentially and ultra cleverly, implore fans to lose our collective fucking minds to . . . Prove that us losing our collective fucking minds is the fault of Fay-Ann Lyons. Complicated like I said, but MASSIVE at the same time.

#3. ‘Anything’ by Buffy [Trinidad]
Slayer. Almost surely the best new artist I take away from the 2010 Carnival Season is the ridiculously impressive Buffy from out of Trinidad who most wonderfully announced her arrival on the scene with what was one of the biggest hits of last year, the ridiculous ‘Anything’. Looking back, while the tune didn’t reach critical in terms of the MADNESS in the vibes, what it lacked in that area, Buffy more than makes up for lyrically as she absolutely DOMINATED with a flow very reminiscent of some her more talented Dancehall peers (and as we got to learn more about Buffy, herself, she would reveal in interviews that Dancehall was her 1st love). Still, the subjectry on this tune was aimed right at the Road and Buffy served up something which will not soon be forgotten - Particularly not within the mannequin wining community.

Best Lyric: “A bam bam was vacant, didn’t know was a vagrant. And if you’s a foreigner they jamming you in a corner. A man wid a Heineken, he wine on a mannequin”

#2. ‘Brave’ by Bunji Garlin [Trinidad]
Tell dem wi no fraid nuttin. Just in case I haven’t sang the praises enough for the biggest of masterpieces from wicked Soca ace, Bunji Garlin, from 2010, ‘Brave’, here’s just a bit more. I’ve started to look at this song within the framework of the social significance I’m almost certain it was intended in. Besides that - The upliftment of Soca music and Carnival in Trinidad and beyond, it’s also just a powerful statement of individuality and perseverance and I don’t give a damn if you don’t like Soca music, how can you not LOVE that?

Best Lyric: “If nobody want to go by Trini Revellers to pick up dem mask, is a boring, black and white Carnival going to pass. So full up your car with gas. Get your cooler with ice and glass. Get your costume and move it fast. Start to jump now we in Mas. Everybody dun know de code. Start to take up now head fi de road. Everybody get in your costume now! IT’S TIME TO EXPLODE!!!”

Wi no normal. While I definitely can appreciate a nice a relaxed melody as good as anyone, particularly in Soca music when, at anywhere near its finest, the results can be AMAZING (see #’s 5 & 10 on this list), there is simply nothing in music quite like the MADDEST and ANGRIEST HEAVY Soca song and in my opinion, no one brought the insanity in 2010 like Skinny Fabulous and it wasn’t with the very well regarded and 2010 St. Vincy Soca Monarch winning ‘Duracell’, but instead it was with the absolute CHAOS which was ‘Scary’. This song was just MAD! It was ‘hide the children and small animals’ Soca music and I LOVED IT! With his biggest hits over the past few years, Skinny, like Bunji Garlin, Mr. Killa from out of Grenada, Ricky T from St. Lucia and a few others, has become one of the biggest providers of such tunes annually and to be completely honest - While he’s had bigger hits with such tunes (obviously), I don’t know that I DEFINITELY place any of them ahead of ‘Scary’ in terms of quality and I also (obviously) don’t place any other tune from last year ahead of it either. It was The Best Soca Song of 2010.