Preview: "What About Love" by Sara Lugo 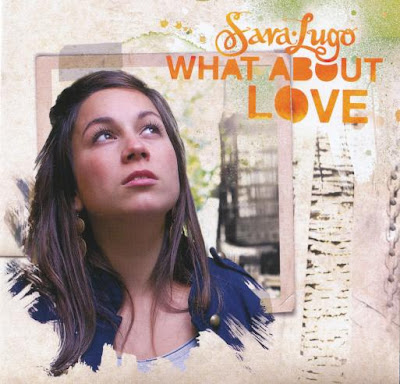 1. What Happened
2. Maybe
3. Soul Chaos
4. Nothing To Worry
5. They Know Not Love featuring Lutan Fyah
6. Part Of My Life
7. Rock Steady
8. Familiar Stranger [Acoustic Version]
9. Locked Away
10. One Of These Days
11. And They Cry featuring Naptali
12. If Tears
Okay so, when we last left Achis Reggae favourite, The Minister of Defense, Funky Comfort, Sara Lugo, we mentioned that she had sealed up and sewed up her debut album, ”What About Love” and was set to deliver it to the masses across the globe coming up on a painfully ‘much later’ date of May 6. And while that date (at least as far as I know) is still intact, two and half months from now, what we do have now is the album cover and tracklist (I actually have the entire liner notes, biggup Markus, which even contains the lyrics to some of the songs). There are four different label tags on the back of the album, but I believe the actual label releasing the album is Soulfire Artists. But also involved are Oneness Records (of course), Rough Trade Distribution (which speaks for itself) and Initiative Musik which is apparently some type of German grant program for . . . German musicians (and I figured out that second part all on my own, aren’t you proud of me?!). And, incidentally or perhaps coincidentally (?), all three of those labels, sans Initiative Musik obviously, were also on board 2010’s best Reggae album, ”Long Journey” by Naptali.

The most interesting thing about scanning through the tracks on ”What About Love” is clearly the fact that I’m not at all familiar with EIGHT of the albums twelve songs and there’s another tune, the acoustic set of ‘Familiar Stranger’, which I’ve also yet to hear. Also, adding Lutan Fyah to just about anything Reggae-ish can’t be a bad idea, so out of the nine tunes I do not know, it’s definitely the one I’m most looking forward to hearing. The vast majority of the project is produced by Umberto Echo, who I know very little about, with the exception that he released a Dub album last year with a big bag of big artists on it, ”Dub The World”, and he has a very very cool name.

I was also quite surprised not to see more of her other tunes on it, although with Echo being involved on the vast majority of the actual album, that probably explains that. Still, particularly ‘Bombs of Love’, which has apparently become quite the hit for Sara Lugo, you would’ve thought it would have been on the album, but . . . Yeah, you probably already have that one or at least you should. And lastly, all of the songs are, at least as far as I can tell, done in English. And the gold standard for Sara Lugo’s music, in my opinion, is ‘Part Of My Life’. Should she have managed to outdo herself and it isn’t the best tune on this album then we may have stumbled upon something TRULY ridiculous my friends.
Sara Lugo’s “What About Love”. In stores and online (I THINK), May 6th.
Posted by Achis at 12:11 AM