'Back By Popular Demand': A Review of "The Return" by Machel Montano 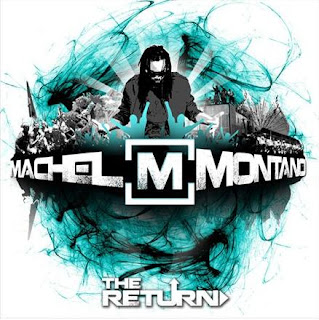 'Coming Again'
As I said, the music from Machel Montano’s 2011 season presents no drastic level of steps away from the music his fans are used to and at this point I don’t even know what would actually represent something that I would call “drastic” musically from Montano, so this is an album which is going to appeal to traditional fans of Montano’s and Soca in general - Which is VERY accessible to new fans as well. To no great surprise, one of the very first tunes he released for this season begins Machel Montano’s new album, ”The Return”, ‘Coming Again’, his announcement that he would, in fact, be returning to the madness in 2011. I LOVE this song! From the first time I laid ears on it, it was excellent to me. It’s a very nice and groovy spot which probably gets a bit too direct at times, but it definitely conveys what everyone wanted to know and makes it sound SO damn nice. The next tune in, ‘Bend Over’ didn’t move me as immediately as the opener did. This one is kind of Techno-ish/Electo-ish and that’s not typically something that I do enjoy, HOWEVER, if I am going to like it, surely the vehicle to get it to my senses would be Soca music. I’m not going to say that I like it, actually, but what I will say is that I have more of an appreciation for than I did the few first listens two or three months ago at this point and, as far as we can tell, the reaction to it, across the board has been positive so check it for yourself. Next is another tune which I think is absolutely spectacular, the vibrant and colourful great time that is ‘So High [A.O.A]’. This tune is also kind of electric, but its roots are firmly in the spectrum of Soca music and it is DAZZLING! It is the kind of song you expect and DEMAND from Machel and he delivered here superbly. Still, the best thing about the tune, relative the scope of the entire album, is that it’s only the second best song here.

'Advantage'
While there have been exceptions to this, generally speaking, every season has a signature tune, that song usually wins Road March and for the past three years that song has also won Soca Monarch in Trinidad. Last year was the year of ‘Palance’, in 2009 Fay-Ann Lyons told us to ‘Meet Super Blue’ and in 2011, Machel took center stage and top honours for the very first time since 2007’s ’Jumbie’, with the MASSIVE shot that was ‘Advantage’ which also provided us with the lasting colourful sentiment of the year as well.

“The stage is in front of us
Time to get advantageous”
Just about every year Machel tunes up such a song and although such MADDENING moments are my favourites and I’m probably pretty easy to please when it comes to them, I’m compelled to say that this tune is one of his finest and it was definitely THE crazy jump and wave inducing moment of the 2011 Carnival Season. It would also net the legendary performer his very first Soca Monarch title which, in retrospect, does seem long overdue. HUGE!

Besides ‘Advantage’, ‘So High’ and ‘Coming Over’, Machel did have a bit of the Midas Touch in 2011 and a trio of other big tunes make up the great ‘middle class’ of ”The Return”. The first, ‘Illegal’, finds Montano going all ‘Gully Creepa’ on the people with a tune which opens in a very familiar fashion and does take awhile to fully get going - But when it does, it is golden. The midtempo set is downright intoxicating and just an unforgettably fun time to be had. Not as fun, however, as ‘Hard Wuk’. For some reason my daughter finds this tune absolutely hilarious and for a kid who doesn’t laugh very much, it’s very odd. Me, however, I just think it’s a big song and one which you will, as I am right now typing this, find very hard to sit still while listening to, especially at the chorus, despite the fact that it’s almost barely existing at that point. And lastly in that row is another stellar track, ‘Spin Class’. Tortola Soca diva and Achis Reggae favourite, Jalena, keeps me company every morning working out - Soca music fantastic for workouts, just in general - And they should have gyms all around the world pushing Soca music in classes. Machel would be in on that and perhaps his first entry would be ‘Spin Class’ which is also, although rarely noted, pretty good lyrically for what it is. The album also does have one more special moment for me and that comes actually in a tune from last year, which I was pretty damn convinced was on the ”Album 34” album but it wasn’t, ‘On De Road’. The song actually was Machel’s effort for Crop Over and it was gorgeous. Gifted with one of the best melodic approaches on the whole of the album and a ridiculous ‘SQUEAKY‘ riddim, ‘On De Road’ is the type of song which, if any of Montano’s song could, might’ve fallen between the cracks, but anyone taking it in a big dosage will know its quality.

'On De Road'
And the remaining four tracks on ”The Return” are of the very Soca ‘standard’ remix/road mix variety. The first is ‘Go Dung’ which features Bajan veteran, Lil’ Rick. The song is actually Rick’s original and while I do like some of his music, this one is fucking ruined for me from long time because it comes across the awful Condemn Riddim which I pretty much condemned the very first time I heard it. Next we have a remix of a tune which I did actually enjoy, ‘Bumper To Fender’, which actually did appear on ”Album 34”. The remix features Vyb . . . Swappi and I prefer the originally and substantially so, but the mixed version isn’t too bad either. And finally are two roadmixes from two 2011 tunes, ‘Bend Over’ and ‘Advantage’. As I’ve said in the past, I’m not the biggest fan of roadmixes or of remixes in general, actually, but in these two cases, what we have aren’t very dissimilar from the first songs, especially in the case of the latter after it gets going, so I don’t complain much here and I know a lot of people really do love these songs every year and REALLY look forward to them.

Overall, while I cannot say that ”The Return” approaches the level of ”Book of Angels” or ”Flame On”, it’s much better than either of its two immediate predecessors in my opinion and it does well to fully display the outstanding music which Machel Montano released in 2011. And on going back to the premise of this review, Machel Montano is one of the few reigning undeniable superstars that we have in Caribbean music today - He is on the top shelf - And while you can argue whether or not he’s still in his own prime, what is unquestionable is his impact in Soca and in music altogether. In 2011 Machel Montano returned to Carnival and we looked to him, like we always do, to take whatever the level of intensity was and destroy it and make everything that much more fun in the process: Mission Accomplished.

Rated: 4/5
Ruf Rex Productions
2011
CD [Digital reportedly coming soon]
Machel Montano
{Note: I'm SICK! Had some stuff planned that will have to miss another day on or two. HOPEFULLY I'll be back on Thursday with a special something. Friday with an even more special something and then a milestone. BALANCE}
Posted by Achis at 12:06 AM