The Visual Side of A Kreyol Folk Trip 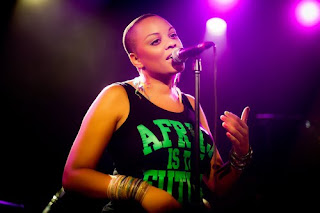 Okay so, when I started writing this I was doing it as “Video Drop #21.5”, in order to feature the latest video from Stevy Mahy, for the tune ‘San Vou’, but as usual with my posts, it began to take on a very different and grander idea and here we have a brief look at all of the singer’s videos - All of which I’ve covered in some regard, but all of which are still LOVELY to watch again.

Obviously on a mission to do a video for EVERY song on her outstanding release, ”The Beautiful Side of A Kreyol Folk Trip”, Achis Reggae favourite, Stevy Mahy, has returned with the fourth video from that great album (and, from my research, I can see that #5 is loaded and ready to go), ‘San Vou’. When I first heard this tune I thought that it was a big song but, I kind of thought that it was the type which would ultimately go unnoticed in the face of some of the bigger sounding and more ‘complexly’ vibed efforts on the album - But I thought that, from a purely sonic point of view, it ranked favourably to almost any of them and while I was sure surprised to see it come as one of the videos, I was well happy. And the video has now given me an even greater appreciation for this wonderful record.

As for the video, I think that the most immediately striking characteristic of it is Stevy Mahy’s hair. I wasn’t sure what was going on (certainly I’ve seen enough recent pictures of her which would make it impossible for her to have grown that much hair), but eventually it does play out and explain itself quite well as she begins to shed (literally) and let go of the past. You’ll also pay a special attention to the paintings, which is part of the story, and I don’t know if Mahy paints (I do know that another Achis Reggae favourite, Lady Sweety, does paint), but I thought the entire story around that - From going to the shop and buying brushes from the old man (who seems like a very nice person) and then the one shot of her sitting on the floor just kind of brainstorming with paint - It was all just awesome and it reasons out near the end.

And I simply must comment about her sitting on the stairs . . . I mean . . . Yeah I’d . . . climb those stairs and do what must be done in the name of all things even remotely natural!

And finally, I just like the feel of the video, in general. Her first video for the album, ‘Beautiful’, had such a nice and organic vibes to it and while this one predominately takes place not only indoors, but is almost completely an indoors project, I still get that feel here - It’s very natural and relatable. Also, while Mahy typically is either smiling or has this coolest look of ‘curious indifference’ on her face (it’s almost like she seems to be saying ‘I wonder what’s going on over there . . . But not really’) I think this is one of her more emotional videos and by its end, it is GORGEOUS.
'Fame Is Gone' [Directed by Pasquale Pagano]


'Something About You' [Directed by Ivan Herrera]

'Beautiful' [Directed by Pasquale Pagano]
In looking through all of Stevy Mahy’s videos, definitely the one descriptor which seems to be prevailingly applicable and present is by calling them ORGANIC, which is also a great way to describe her music. One can say that her entire genre of Traditional Kreyol music or Zouk or whatever you’d like to call it, is naturally occurring and just kind of ‘free’ sounding and you could make that point very strongly, however, I’d say that it’s even more the case with her. She makes this brand of music which seems almost inherently visual to some degree to the point where, when you look at the clip of ‘Fame Is Gone’ and it has certain visual effects applied to it, you STILL see Mahy doing things like sitting on the steps of her building and going to a barber to get her hair cut and going to a strip club and just doing kind of these very basic and very everyday type of things, under the scope of being a music video. And that piece, in particular, is that way despite the fact that she spends the entire show traveling from place to place. 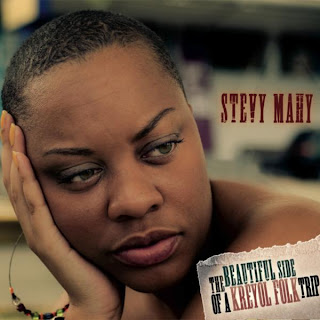 "The Beautiful Side of A Kreyol Folk Trip"
And because I must go there (and you know it because you’ve also gone there in your collective heads), Stevy Mahy, seriously, is . . . positively breath taking. She isn’t what you might call “BEAUTIFUL” in the more traditional sense (not what YOU might call it, I WOULD, on the other hand), but her very interesting look and POWERFUL sex-appeal comes blaring through at points in all of her videos. I’ve already mentioned the stair scene in ‘San Vou’, but can also look at her laying around with the blind guitar player in ‘Something About You’ (CLEARLY he must’ve been blind because had he not been visually impaired, he would’ve put down that fucking guitar and played with she, who was curled up right next to him at the time) In ‘Fame Is Gone’ there’s this shot with her on the stairs and she looks great there also, but what sticks out is this shot of her leaning against in rail in New York (I THINK) with this very inorganic white dress and it is obviously meant to be sexy and it is - It’s very sexy.

And then there’s ‘Beautiful’. I cannot think of a more aptly titled song/video, at all, in recent memory. The entire thing is beautiful and it goes from waking up next to a probably completely naked Stevy Mahy to just relaxing and spending the day with her. It’s one of the best videos you’ll ever see and this song, a year later, is still very healthy on my players an I’m not the only one.

In closing, undoubtedly Mahy and Joel Jaccoulet and company who has handles for this album and this project have directly and intentionally taken this very active visual course to promote the album and, in keeping with theme (and the title) of this ‘trip’, it just works so well! And it’s because of that, and the fact that the album, itself, was such a wonderful piece of work, that I’m saying, in terms of overall arrangement and production, you may not find, anywhere, a better presented project than ”The Beautiful Side of A Kreyol Folk Trip” by the angelic and enchanting Ms. Stevy Mahy.