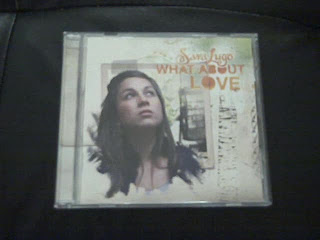 Earlier this week we received two packages from the disgustingly newly in love Bredz who . . . Yeah, it's nauseating. It really is. But big him up still. One of them contained something which was complete rubbish. I mean it was AWFUL (I did like one song, however) and two other nice things (biggup Demario) and the other only had a single item, but it's one which IMMEDIATELY cleared its own space on my players. It's the debut album from Achis Reggae favourite, Sara Lugo, "What About Love". And look! She even signed it! 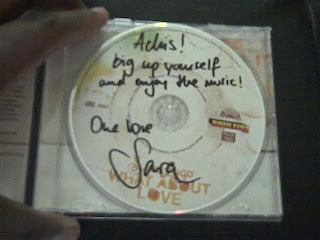 I have a signed album from Sara Lugo! WHAT! She distinctly pointed out, it in a great detail, that she wanted me to "enjoy" the music and certainly I have. How much have I enjoyed it???
I'll tell you tomorrow.