Rewind!: A Second Look & Listen to "What About Love" by Sara Lugo

Surely you didn't think we were done! 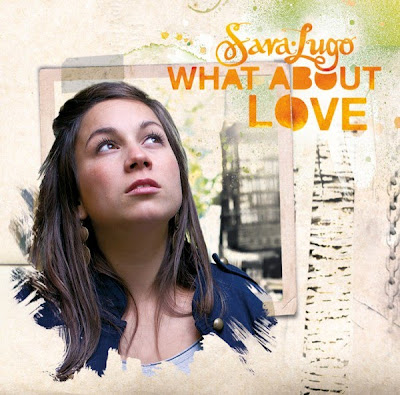 "What About Love" by Sara Lugo

When last we left 4'9 German Reggae superhero, Sara Lugo, she was busy releasing her lovely and extremely well received debut album, "What About Love", about a month ago. Anyone who is reading this has already purchased that album and are currently listening to it as they read this (including me - "them a bombing and controlling and abusing. No, they know not love"), so I don't need to tell you to do that. Instead, I thought that we'd briefly rewind time, go back around 744 hours or so and, having had a bit more time to digest and reflect, have another listen to and re-enjoy the splendour of Sara Lugo and "What About Love" . . . While my Wife's dog looks at me with great genuine and natural disdain.

1. 'What Happened'
Not trying to over think this song (yet) - My impressions of this one haven't changed too much, but I've definitely begun to appreciate, more and more, the vocal performance here and, subsequently, the entire sonic appeal of it. Somewhere in the back of my mind (very near, actually, to where I keep the Bouyon) I can see a video for this song with Sara Lugo playing a piano and singing while moving through various pieces of a fucked up society and once she leaves them, they're much better than when she arrived. The significance in that, of course, is that the song is beautiful, along with making its lyrical point. Also (and here is the over-thinking) I'm now noticing the absence of a '?' in the title for this track as well as the album's title also (and this is, basically, the title track), which may suggest a bit more aggressive stance from Lugo - Not asking when it may arrive or an explanation of the absence of love, but more making a suggestion and a statement to include it.
2. 'Maybe'
Again, I’m drawn towards 'Maybe' from such a detailed audio aspect, because it does sound so nice and this song, perhaps even more so than any other on the album, literally seems to revel in that fact. Checking in at 4:22 long, the final ~ minute of the tune is straight instrumentals and STRONG work. There's a guitar and horns and it’s all just very good and had they wanted to let it play on for another hour or so, I wouldn’t have complained at all.
3. 'Soul Chaos'
When I did the review of the album I called the Jazzified 'Soul Chaos' the second best tune on the album and it still is in my opinion (although 'Maybe' is probably gaining on it) and I've found myself focusing more and more on the lyrics of this intentionally chaotic track. So, first of all - Who the hell is Lucy and where did she get so many damn diamonds? Secondly is this:
“Questions over questions
And tears over tears
Life has so much to teach us -
Through the years
There’s a reason for everything
Don’t rush, everything takes time
There’s a season for everything
For every word, there’s a rhyme”
(except 'orange')
. . . "everything is mixed up in your mind"
The single most impressive line in this song comes later on, but this particular passage now sticks out more and more because you can actually see Lugo attempting to create chaos and attempting to, ultimately, place it into perspective. The final four lines of the first part [beginning with "There’s a reason for everything"] are most attractive because it seems like a person taking in so much advice from different sources and then she next goes "everything is mixed up in your mind" - The same person is STILL unsure of their own place in the world. Healthy, healthy writing.
4. 'Nothing To Worry'
This BLARING song is one which is pretty much demanding that you pay attention to it in some way and following a relatively laid-back opening, it forces its way into the spotlight. What now stands out in this case is the riddim itself - It may be the best on the entire album. It's either attempting to overpower you at moments, or it’s this cool little infectious one-drop and it changes instantly and sometimes it's a little bit of both at the same time. There was obviously quite a bit of work spent on the construction of it and Lugo doesn’t let it all go to waste as she serves up another big tune.
5. 'They Know Not Love' featuring Lutan Fyah
Unsurprisingly, as far as songs on this album with which we weren't familiar prior to the album's release, 'They Know Not Love' has become THE most played by me. It's not THE best tune on the album, but it’s very good and, for some reason, I hear this tune and I picture people running . . . Yeah. My peculiarities notwithstanding, the song is an excellent display of both artists stepping in fine directions and I’m now trying to take this tune, with its title, and connect it to both the album’s title as well as that of the opener.
6. 'Part of My Life'
And then there's the boom. I've written about this song several million times if I've written about it once and you know you have something special when, even after that, you can still come up with something 'new' in reference to it and it isn't just because of my big and shiny vocabulary. Two things stand out here: Missing at the beginning of the album version is the cool adlibbed intro from the 'original' version (which you can find on her self-titled EP, which they are apparently still selling, so check that out). Also the best part of this song is when she starts with "I believe in me and you . . . " at what is likely the emotional pinnacle of the track. And that's just the finest of dozens of excellent small things which makes this tune beautiful and, at least in my opinion, the best on the album and the gold-standard of Sara Lugo's entire catalog.

Note the very serious nature of this interviewer while asking Berbice about his song which was absolutely ridiculous. And I say that most respectfully, because his song, 'Traffic', was, rather easily, one of the greatest songs of all time


let it go . . .
End of Intermission
7. 'Rock Steady'
My Wife's favourite tune on the album (and my Wife hates pretty much everything) (including feeding her fucking dog apparently) is 'Rock Steady' and I've managed to get an exclusive interview with her as to what she likes so much about it and here it is:
Achis: So why do you so enjoy ‘Rock Steady’ from ”What About Love”, my most wonderful and loving and beautifulest love of life?

Mrs. Achis: “Because it sounds the best”
There you are ladies and gentlemen! Breakdowns and musical analysis simply get no more in-depth than that!
8. 'Familiar Stranger' [Acoustic Version]
I didn't mention this the first time around but the acoustic version of 'Familiar Stranger' really has a very OPEN sound to it and, at least to my ears, it doesn’t seem like they tried to actually recreate the original piece (the Soul Riddim) on the song, or at the very least, if they did, they did so very loosely. The result is something which I don’t necessarily want to call 'better' (you need to REALLY pay attention to the Soul Riddim which is now infinitely better to me than it was initially and should probably be regarded as one of the best 4-5 riddims of 2010), but its definitely DIFFERENT which is a very good thing to pull off with the same song.
9. 'Locked Away'
I think that I basically alluded (I didn't) to the fact that this one might 'catch me' at some point in the future and it well has. 'Locked Away' is a much better tune than I gave it credit for and I’m damn interested to see what might happen if that song is given a chance in more traditional R&B circles. In general, Lugo's music is very accessible and this is, by far, the most accessible of the lot.
10. 'One of These Days'
This tune is one which I don't even think you can take in, in an initial sitting (unless you're a lot smarter than I am) (and you probably are) because there's just so much going on, it's very active and I think that’s well intentional. These days I’m not prepared to call 'One of These Days' a SAD song which is where I may end up thinking, someday, in regard to it and the reason why I'm not is that it’s also very introspective and inward thinking.
“Sometimes I feel like screaming [in my head]
Sometimes I feel like dreaming [about peace]
Sometimes I feel like breaking down -
When all I want is safe and sound”
Now you can call that, and the prevailing mood of the tune, somewhat sad or "gloomy", as I referred to it as being in the review (the distinction I would make there is that 'sad[ness]' is a harsher form of 'gloom[y]'), but what keeps me from making that final jump is that it all seems to be a part of someone really DEEP in their thoughts and as someone who (is about to tell you entirely too much of his damn business) has battled mental illness, it isn’t always sad and 'staring' at it from that perspective it becomes vividly relatable, but perhaps not for the intended purpose. Yes - This one I could spend days on.
11. 'And They Cry' featuring Naptali
I got sidetracked listening to this one because it caused me to dig up a most excellent favourite - "Long Journey" is STILL the single best Reggae album of 2010 .
12. 'If Tears'
And lastly we get a most breezy and retrospectively quite sagacious tribute tune from Sara Lugo to her Grandfather who has passed on. Hopefully I'll NEVER come around to the point of labeling this one 'merely' a sad song. It just isn’t and, it’s also not as "gloomy" as 'One of Those Days' to my opinion.
What resonates now listening to it is just how well put together 'If Tears' is. The subjectry and maybe even the actual SOUND of the tune here is what drowns anything else around it, but if you really tune it in, clearly it's one of the best and most complete tunes on the album, which is what you’d hope for someone who obviously made a great impact on Sara Lugo.

This is just cool!
There're still quite a few different directions in which I could get at this album (and if I stick around long enough, I probably will), but here's just a glance at what we’re thinking now through a second look at the wonderful debut album of the delightful Sara Lugo, "What About Love".
{Note: I call it "brief" and it’s 1800 words}
{Note 2: Biggup Markus from Da Ville}
{Note 3: Biggup Bredz for his magic . . . YouTube code/encryption . . . stuff. The man simply will not allow us to have boring silver and white borders}
{Note 4: No Behaviour!
{Note 5: NONE!}
Posted by Achis at 12:06 AM