I really hope you're not looking down here to figure out who that is
Yow!
I told you not to worry! I’m back! I’m not going to be sticking around for too long, however, but you’re likely to have me for the next week if you care (and you probably don’t) and then I’ll finish up my hiatus - And return sometime in August (after I, miserably, turn 30) (I wasn't actually planning to come back writing so quickly, but something nice caught my attention and I kind of knew that it would at some point) (oh and if you do blog, you know this stuff is like therapy and I did miss it). I didn’t want to make this too long (because it's two weeks ago now), but biggup Fireman Hooper, winner of St. Vincent Soca Monarch 2011. What can I say? I had absolutely no problem with him winning. I did think Skinny Fabulous did excellent (albeit in a VERY chaotic manner), but the Fireman was top notch and although I do always lean more towards Skinny, I just have to give the man credit - Fireman is ALWAYS top notch - No exceptions and it was great this year, with a special cameo appearance from none other than Shrek. I would think that Skinny might think to take off 2012 (maybe make a song directly for TnT (just a thought) and come back in '13) because a lot of people seemed to want to see him lose this year, but I more than got what we went looking for. Skinny Fabulous is a fantastic artist and one of the greatest Soca performers of his time, so big him up - But it's all about the 'Animal' in 2011 as Fireman Hooper takes the honours in SVG for the 927th time (and biggup the oldest man in the world, Gao, for taking the road) (and keep an eye out for Fya Empress) (and biggup Jamesy P) (and Problem Child). Just more and more vibes for THE idea of all ideas which I’ll tell you about a week from now. 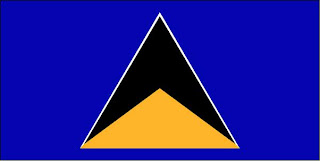 In other Soca news, completely unrelated: Tonite (Saturday) is St. Lucia Soca Monarch 2011. I will not be there, but I will be watching (HAPPILY, because I don't give a damn who wins). Who wins??? The only way Ricky T, with 'Madd Ting', isn't taking the crown is if he doesn't perform. He could probably go on stage with no props, no band and just a record, wearing a tuxedo and still win. He could probably simultaneously HUMM his own riddim and deejay at the same time and still win. I'm not terribly fond of the tune, but Ricky T does not need a great song to take Monarch in St. Lucia.
'Madd Ting' by Ricky T
Shockingly (at least to me), he also took the Groovy Monarch competition and Ricky T is mashing up St. Lucia in 2011. However, that's not to say that he isn't without competition. There're some pretty good tunes coming out of Lucia this year. I’m loving efforts from the likes of Ricky's brother, Ambi, Alpha, Mantius (with a Jab Jab???) and a few others (like defending champion, DJ HP). In my opinion, although Qpid is mysteriously absent from the final list (at least the one we saw) (placing that phrase here is just terrible, terrible writing! It's awful, but I'm rusty, so please accept my apologies), I think the main competition comes from Pringles with 'More Mash Up' and Achis Reggae favourite, Ilah Man with 'Destruction'.

'More Mash Up' w/Mr. Killa by Superman HD [aka Pringles]

'Destruction' by Ilah Man [This song is fucked up!]

The former is interesting because should Pringles draw Mr. Killa on the stage, he may very well have a chance to pull an upset, as the two link for another season with BIG results. Ilah Man, of course, has absolutely no chance (he's been robbed before), but I LOVE that damn song! MAD! Also, it should be said that even though CLEARLY this is his tune for Monarch (he even says so in the song), everything I've seen thus far suggests that Ilah Man will be doing 'Vex'. Which is probably a better song . . . But nowhere near as INSANE.

'Vex' by Ilah Man [considerably less fucked up]
And that’s it. If you are headed to St. Lucia Monarch (starting to wish that we were joining you) (it doesn’t take much to get me excited) [your joke here] tonite, definitely have a great time.

So this week, just look forward to a pretty FULL (but strange) week. A couple of reviews (one of which I’m currently half done with) and a “Check It” DEFINITELY (so much nice things around now) and blah blah blah. I’ll probably finish on Saturday and let you know about what we’re working on (even though I kind of told you already).

{Note: Biggup the World Cup. We watched a couple of games - Very impressive!}
{Note 2: Tomorrow we pay tribute to . . . A very attractive person who sent us a lot of nice stuff!}
Posted by Achis at 12:08 AM