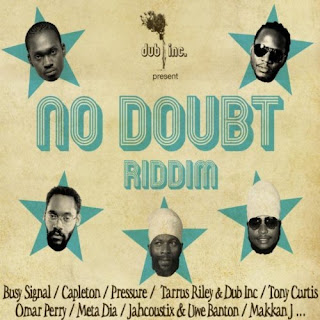 The No Doubt Riddim [Dub Inc/Diversité]


No Doubt Riddim Mix
First this week (not really - I wrote the entire "In Stores Now" section first) is a riddim, the No Doubt, whose press release has been sitting in our email for about a month and I never really expected to get to it (because Bredz didn't say anything about it) (biggup Bredz), but I chose to have a listen and I'm going to tell you that this is the best RIDDIM on this entire list, There may be better full albums/releases, but as far as the riddim, itself, it's all downhill from here! This is a LUSH modern Roots set from Dub Inc from out of France which features a star studded roster featuring TARRUS RILEY, PRESSURE BUSSPIPE, CAPLETON, BUSY SIGNAL, NAPTALI (!) and others. It isn't THE best riddim of the year for me (that's still the Show Version), but it is right up there. BIG!
Releases on October 10
Digital 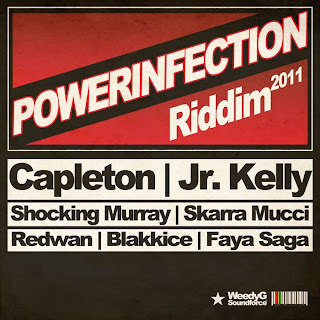 
Powerinfection Riddim Mix
I feel like I know these people so well because I've probably written about four or five news stories for their releases for United Reggae (no worries of that here with this thing) - So I thought that I'd tell you people with the incredibly low standards (which is obvious, look at what you spend your time reading) about the latest piece from Weedy G Soundforce from out of Switzerland - the Powerinfection Riddim. This riddim sounds like something out of an action movie or maybe FWI Dancehall circa 2007-'08. It's just really really angry and more than lives up to its title. Somewhere both Krys and Aidonia (and probably Kalash, too) are mad that they didn't get a chance here. In their absence is a FLAMING Capleton with 'Buss My Own', a more than agitated version of Junior Kelly (always interesting when Kelly gets a bit of petrol), Skarra Mucci, Shocking Murray and others.
Reelases on October 7
Digital 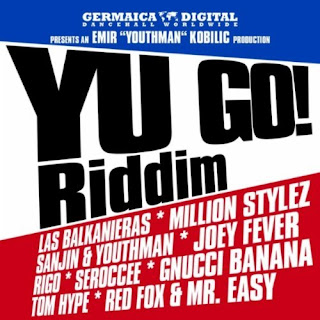 The Yu Go! Riddim [GERMAICA]
Not much to say here at all. The Yu Go! riddim is the latest from Germaica. Their previous piece (whatever it was called) was damn good, I rememeber and they're back with another nice set. I don't know some of these people, but Million Stylez is on it and that means . . . Good stuff yeah.
Releases on October 18
Digital 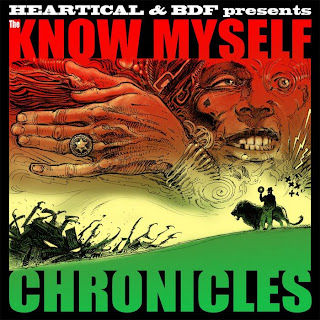 "The Know Myself Chronicles" [Heartical]
And lastly (this is the actual last, ignore that other one) Heartical Records and Basque Dub Foundation team up to deliver an album featuring a cut of the timeless I Know Myself Riddim with a great mix of vocalists and participants. Ernest Wilson is here with the original track as is Papa Kojak and even Sly Dunbar (who may've originated the music) and also on board are General Levy, Mykal Rose, Zareb, Dawn Penn and even Achis Reggae favourite, Tiwony! This one is definitely going to grab more of the Dub crowd and probably in a big way.
Releases on October 14
MAYBE CD + Digital 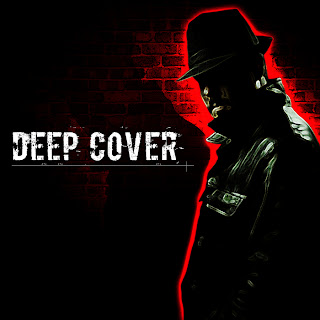 The Deep Cover Riddim [2 Hard Music]
First up this week we have the latest digital release from Jeremy Harding and co. at 2 Hard Music, the Deep Cover Riddim, from a few months back. I can remember hearing this one for the first time and not rating it patricularly high, but it - meaning the riddim itself, is one which is very subtly complex and really well done ("by Jeremy Harding" on anything generally is going to mean that it's strong). Of course the highlight for me was Agent Sasco, but he was joined in a big way I-Octane, Busy Signal, Konshens, Denyque and Natel on this cool and colourful set.
Digital 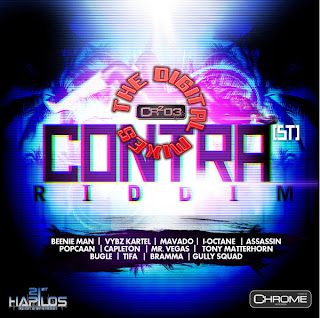 The Contra Riddim: The Digital Mixes [Cr203]
Here's another one from just a little while ago and another DAMN impressive piece as well. The Contra Riddim from Chrome certainly isn't the best riddim that I've heard and it's not even the best in this post, but it is authentic (somewhat flashy) Dancehall music and, unfortunately, it doesn't take much more than that these days to catch my ears. What the bouncy piece does have going for it is that backs some pretty strong material while resting in the more than capable hands of Assassin, Bramma, Mavado, Kartel, I-Octane, Bugle and even Capleton. If you missed this one when it reached definitely have a listen because in here is some really nice ACTUAL Dancehall.
Digital 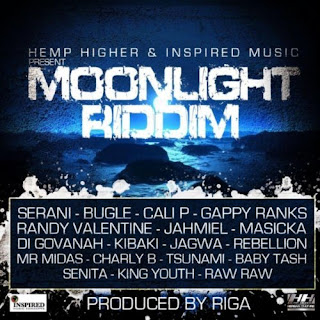 The Moonlight Riddim [Hemp Higher & Inspired Music]
Speaking of real Dancehall music. The latest from Hemp Higher (along with Inspired Music), the Moonlight Riddim, is another composition which certainly qualifies and one which grabbed my ears as soon as I heard it (and on a Serani tune, no less). HH, to my knowledge, is known for pushing some really really energetic vibes on their riddims and this one is the same, definitely. A suddenly expected Bugle, an always expected Cali P (more on him in a day or two), Kibaki, Jagwa (big tune) and Rebellion The Recaller help to round on the roster of artists. Still, it is a PRECISE Gappy Ranks with BOOMING 'Fire From Di Lighta' who takes top honours on the riddim.
Digital 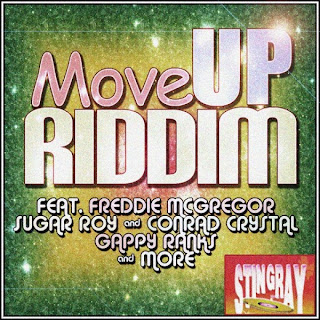 The Move Up Riddim [Stingray Records/Zojak Worldwide]
If ever you want to do some shopping strictly based on label, then I'd suggest you take into consideration one of the world's most underrated imprints, the WONDERFUL Stingray Records from out of the UK who now return with another GEM of a release - the Move Up Riddim. In typical Stingray fashion, this old school piece makes for an excellent riddim album and one of the nicest aspect of the release is just how varied the talents voicing it are. Freddie McGregor heads a group which also includes Gappy Ranks, Sugar Roy, Tenna Star, Glamma Kid, Sandra Cross, the big voiced Raymond Wright and even the morbidly under-utilized Avaran (big tune from Zagu Zar as well). Definitely check this one out - Guaranteed nice music.
Digital 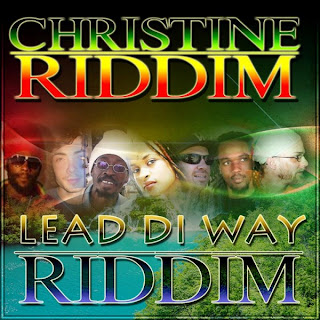 The Christine Riddim & The Lead Di Way Riddim [Irie Sounds International/Zojak Worldwide]
This interesting and very well done double set release which features the Christine Riddim as well as the Lead Di Way comes via Achis Reggae favourite, Irie Sounds International. Two-riddim albums are always pretty nice (our Compilation of The Year 2010 was such a release) and particularly when they feature such a healthy mix as this one. The former is a 'redo' of an older riddim - the Hold On To What You Got - which was best known for backing a big Dennis Brown tune of the same name and it features efforts from the 'Sugar Princess' and another Achis Reggae favourite, Pashon Minott, General Smiley, MasSicker and a really nice song from Mikey Browne. While the Lead Di Way serves up tunes from (" ") Ras Attitude, Rocker T and Steve Steppa. Also present, not surprisingly, is 'Mek It Inna Life', the big single from Pashon Minott which, potentially, may just find itself present on EVERY Irie Sounds release from now until the end of time. Very nice vibes here and between the two sets, there's likely to be something for any fan of the music.
Digital 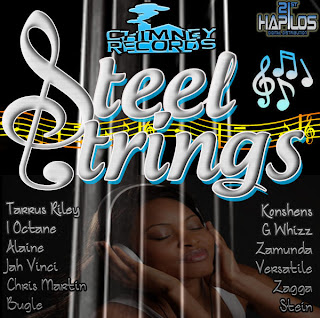 
'Bubblin' by Alaine
The BRIGHT Steel Strings Riddim comes courtesy of the mighty Chimney Records and it well lives up the level of quality set by the label throughout its lifetime. This thing is just GORGEOUS and is easily made even more attractive as it lines itself up for some of the genre's biggest and most talented lights. Tarrus Riley, Alaine, Bugle (again), I-Octane, Konshens, Zamunda, Chris Martin and a very impressive Jah Vinci all do a major damage on the Steel Strings - Which may be, all around, one of the best release on this post.
Digital 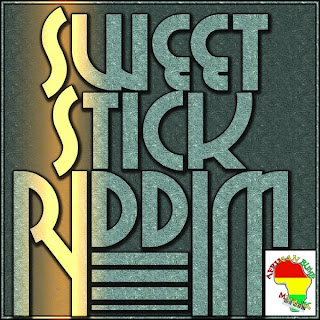 The Sweet Stick Riddim [Afrikan Bump Muzik/Zojak Worldwide]
This one is pretty thin with only a few tracks, but I wanted to steer your attention to it because the Sweet Stick Riddim from Afrikan Bump Muzik, which reached years back features a couple of REALLY nice tracks, 'Life Change' and 'Fairplay', from Mark Wonder and Lutan Fyah, respectively. Also present is a combination featuring Gyptian alongside Norris Man and a decent tune from Muscle Emmanuel as well (he has two, but you want the second, 'Inna Dem Time Yah'), but check the two aforementioned pieces especially.
Digital


'U Get Everything' by Vybz Kartel & Voicemail [Ariba Riddim]
And 'finally' (before I go back and add the 'coming soon' portion of this post because I just changed my mind about what it was going to be) - We have a case of 'like Father, like Son'. Back . . . several hundred years ago, I told you about King Jammy's emptying the vault to the digital world and apparently (yes) his son is following suit. Jam2 Productions (Hey Susan!) recently unloaded a few (probably more than I know about actualy) pieces from its own vast catalog, including the Pull Up, New Moment and Ariba Riddims. All of these are from the earlier 2000's and they sound like that (which is a good thing). The main thing about them all is that you'll find near(er) prime level Vybz Kartel deejaying at a masterclass level. To my opinion, the Ariba is the best of them all, but you'll find interesting things on all three and I'm sure there's much more on the way - If it hasn't already arrived.
Digital
Posted by Achis at 11:51 PM