'These Strings': A Review of The Stringz Riddim 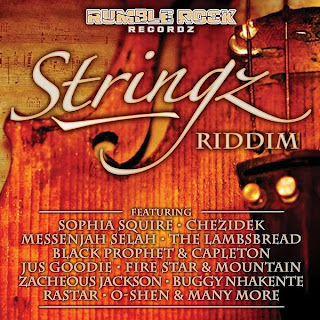 Certainly it cannot be said that we're struggling to any degree, but I do have to say that it's always very nice when we come across a new label, whether actually new or new to us, that can be depended upon to produce excellent music on a consistent basis. When we look at artists, specifically, the feeling is much different as, although they are ultimately the face of the music, it's much more of a situation of watching something develop and, eventually, arriving at a point where we may try to identify some type of historical reference for them - at the absolute highest level, of course. With good labels, however, the impact can be, and generally is, much more immediate, even if they don't stick around for very long! Good labels bring good music INSTANTLY and with the tendency of today being labels coming from everywhere, it's always good to keep an open, because you never know who may stop by. For example (!) earlier this year we stumbled upon the US based Rumble Rock Recordz which was, initially, probably my favourite find from since Philadub a couple of years back. RRR introduced themselves to us in a most interesting (and fitting for the sake of this review) manner - a BIG riddim. The Step By Step Riddim was a GLORIOUS Roots set which not only identified a certain level of class and ability in the label, but it also gave it (hopefully at that point and obviously now) a certain distinct quality. When you look at the names of artists voicing the Step By Step, the one thing that stood out at the time and still does is just how diverse they were! The mix wasn't just the more 'standard' blend of combining superstars with up and comers and everything in between (and I do so LOVE that standard!), RRR went BEYOND! What stands out for me even now, having well added the Step By Step to memory is that appearing on the riddim was Faïanatur and Oshen. The former is just odd in general (and I mean that in a good way) and the latter is someone who definitely has established a name for himself and I bring him up because of his most distant origins as a native of Papua New Guinea. Furthermore, it was just a matter of doing this for a gimmick or something - obviously - the riddim itself was big and it produced what should still be regarded as one of the finest riddim albums of 2011. So, with a name established, Rumble Rock Recordz - Can you keep us interested?

Riddims, they can do. Picking a logo, however . . .
Yes you can. First of all we backtracked a bit in the way of "The Truth Shall Be Told" which was the nice 2010 debut set from RRR favourite, Zacheous Jackson. That album, again, reiterated what was obvious, that the label was one to pay attention to. It also was very straight forward and when you combine that with the first riddim, it was assumed that Rumble Rock was a pure Roots Reggae label and there wasn't a damn thing wrong with that. HOWEVER, buried on Jackson's album was a song which was pretty much a changeup for that album by the name of 'Better Dayz'. It wasn't too much of a leap, but the tune featured a very colourful and R&B tinged backing track which was amongst the many standouts on that project. Fast forward a few months and, in the process of 'stringing' together a nice opening for themselves, Rumble Rock Recordz now brings forth their second riddim album (I THINK) for that very same riddim, now known as the Stringz Riddim. Quietly, I was waiting on this one for a nice amount of time. The SBS reached back in April and it's now six months from then and it is a nearly perfect time to comeback with a followup (although May wouldn't have been bad, or June, July . . . ) and, much like its predecessor, the Stringz has generated a nice amount of buzz online, even before we got into it, so with that and the fact that I'm already in the mind to look forward to RRR's next project, whatever it would've been, I was not only very interested in having a listen to the results, but I was also anticipating something pretty impressive as well (with big results comes big expectations). 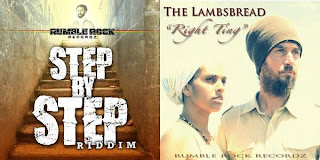 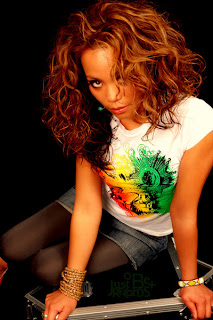 Sarai Knowledge
Jhaytea who has been having an excellent few months or so (highlighted by 'All The Love', a big combination with Glen Washington) is also here with the lover’s piece, 'Like Heaven' which is another strong piece from the Roatan native. Jhaytea has serious star potential in my opinion and I can well envision a 'J-Boog like' run from him on the horizon. His song on the Stringz would also figure to have mainstream legs if given the opportunity, but something tells me that he's headed there whether it does or not. Excellent track and one of the riddim's finest. The HEAVY Ras Professor also scores min a mighty way with 'Meditation Time'. Here's a song which kind of put my mind to something I'll speak about more in closing, but here I'll just say that this is such a STERLING track. It's kind of rough at the same time, anything the Professor does and has ever done will always be kind of rough around the edges, but there is an almost extreme beauty here and on so many levels in my opinion (am I could really go for an album from Ras Professor now???). The divine-voiced Fabian Williams wraps up and delivers 'I'll Try' to the Stringz Riddim. I don't know a great deal of Williams, but he makes a nice impression with his tune and hopefully RR has him back (I'm sure they will). Finally is the only name on the Stringz Riddim which is COMPLETELY new to me - Sarai Knowledge (cool name). Knowledge (who sounds a bit like Ce'Cile to my ears) comes with 'Jah Light' and from what we've read, she typically focuses more on the Hip-Hop side (which may explain why I don’t know who she is), but she sounds pretty nice, while infusing Hip-Hop vibes while the song progresses.

Stringz Riddim Mix Pt. 2
Rumble Rock does include a clean version of the riddim (always a good idea) where the strings do become more apparent to my ears. This riddim, as I alluded to a second ago, really began to strike me as being incredibly accessible and VERSATILE. You hear it initially and you automatically go to thinking just how nice it would be as a modern Lover's Rock riddim and it does serve that purpose, but it can also do modern Roots (see Ras Professor) and a variety of other things, such as Hip-Hop and even Gospel.
Overall, I will be back for a third time. Again, I'm going to try not to directly compare the Stringz Riddim with the Step By Step, but even if I did, it's definitely on a similar level in terms of quality, which makes it obvious that Jimmy Cui and co. at Rumble Rock are exercising quite a bit in the way of quality control. Chances are, I think, that we've probably already heard their next riddim to be featured and whatever it is, I'm well looking forward to it. When you are fortunate enough to find a label who can consistently provide top material, even in Reggae where, as I said, we aren't experiencing a dearth of such entities, it's important to stick to them and support them because the benefits to you, as a fan, are potentially HUGE. It'll take more than two big riddims and an album ultimately to keep my attention, but if Rumble Rock Recordz continues their winnings ways, you won't even have to ask me what I think. Nice.
Rated: 4/5
Rumble Rock Recordz
2011
Digital
Rumble Rock Recordz
Review #335
Posted by Achis at 7:42 PM