Turn Your Lights Back On!: The Ten Best Reggae Love Songs of The Era

Contrary to popular belief, the Reggae love song did not die in 197X - It's just taken on a different tone. Coming from the more traditional and very straight forward "oh baby baby I love you" type, to the more multi-dimensional and multi-faceted, the modern Reggae love song, when at its absolute best, sometimes masquerades as something else which is only revealed to the most keen of listeners. Be it taking the notion of love and applying it to a social concept or speaking of 'love' in the case of loving the entire world or some aspect of it, Reggae love songs just aren't what they used to be . . . and that's a good thing. As proof that the entire genre hasn't fallen out of love with LOVE, here're our choices of the best love songs of the era. Turn Your Lights Back On!
{Note: This list was really difficult}
{Note 2: We specifically avoided using any one artist more than once}
{Note 3: Songs are ranked only via personal preference}
{Note 4: The "era" is loosely the last decade and specifcally (biggup Bredz), everything after 'Virtuous Woman'}
{Note 5: 'Brown Skin' was #11} 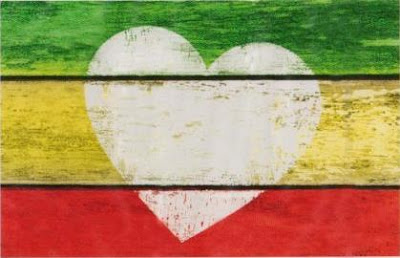 Love & joy. 'Handcart Bwoy' would've been 'ignition', for the most part, when it comes to introducing the majority of the Reggae listening world to the very odd chanter from the most wonderful place on earth, Perfect. The song was (as I hopefully alluded to in the opening) (haven't written it yet) wonderfully modern by showing a more socially aware aspect of two different types of people coming together, but it wasn't in the stale and overused manner. Today, the tune hasn't lost much of its lustre at all and is still as DELIGHTFUL as ever.

Another baby. In retrospect, Queen Ifrica's OUTSTANDING 'Below The Waist' has become something of an oddity in her absolutely stunning musical catalog. While she has made love songs over the years, none have been as 'direct' as this one which was pretty straight forward. Still, what has become a staple of her career was the undeniable strength of the tune which captivated (and continues to) audiences from the very first spin. It should also be said that you'll go rather deep into this list (at least to #5) before finding anything even remotely close to the lyrical equal of this track, which is another constant quality in the music of Ifrica.

Sweetness! Ce'Cile is the first of 2-3 names on this list who could really have an entire list like this for themselves. I chose 'Waiting' for a couple of reasons (even though I think 'Anything' is her best). The first, OF COURSE, is that I looked at the video for the first time in a long time and she looked very nice. As for the tune, you can certainly take it in a very superficial way, which isn't bad in this case because it's gorgeous, or you can apply the notion of 'waiting' to her WAITING for a variety of things. Some of these things are fun and some not so much, like waiting for the release of her special someone from jail (more on jail later), which was how most took this tune and Ce'Cile took it all the way as it remains one the biggest hits in a career which seems to add a few more every year.

Nice to know. Time is probably the only thing keeping this future classic from the top half (of the top half of) this list. 'Let's Do It Again' is something to be PROUD of if you enjoy modern Reggae music, because in every way it's just as good as anything as you're likely to find in any other era of the music and unlike many of the other pieces from this list, it isn't very dependent on any type of style. J-Boog could've sang this one to a hit in any era and Don Corleon could have made it work in any as well. TRULY, a timeless a vibe.

The crossover. Don Corleon also helmed #6 on this list (as well as #'s 1 & 2 and #11) which found, somewhat quietly, one of the most remarkable situations in all of modern Reggae as VI ace, Pressure Busspipe, crossed over in a captivating way and started his journey to becoming a household name in our music. 'Love & Affection' was the key to opening that door and it's opened the world to the supremely talented St. Thomas chanter who figures to continue serving up thrills for DECADES to come.

The weight of the earth. A MIGHTY case could be made that, on all 'normal' levels, 'Warrior Love' is THE best song on this list, period. And while it may not have grabbed the attention as some of the others on this list (particularly the two before it and the next one), it's arguably better than all of them and it definitely did its share of damage as well. What I really like here, these days, is the subtle EDGE this tune has. Etana brought the BITE on the love song, which didn't register in the category stereotypically, but instead became this almost overpowering track which just happened to concentrated on a functioning type of love - also known as PASSION!

#4. 'She's Royal' by Tarrus Riley [2006]
So royal. This song definitely took a while to grow on me as we're now a half decade away and I'm pretty sure that it's been just within the past year or so that I've been hearing what everyone else who loved it heard IMMEDIATELY. 'She's Royal' is a nearly PERFECT celebration of WOMANKIND. Tarrus Riley put the song on a level where it became fast-tracked to becoming a classic and when you listen to it, it sounds like it (it even did to me from before). More importantly, it is a very empowering type of a song and not just to women. If you LOVE women and you treat your woman and the women in your life as well as you possibly can - 'She's Royal' was for you as well. It is this all-encompassing 'credential' and just its musical shine which ensures its place on this list and, realistically, any other like it as well.

One of a kind. The most unlikely entrant on this is also one who got a great deal of consideration for being #1 and I would've had no problem making it so! 'Don't You Know' was just MAD! The song was downright dazzling and while it wasn't the type of certain hit that many of these tunes were and are, for more of the hardcore heads, it went a great distance in introducing not only Isasha (and, really, Million Voice as well), but Trini Reggae as well. It was that amazing of a track which shook up the place with love and continues to do exactly that all of these years later.

Release the cure. Jah Cure's 'Longing For' now kind of exists in its own little corner as do some of the other songs which are related closely to it (most notably 'True Reflections'), which is kind of strange, but fitting. This song was STUNNING! I write reviews and I overuse positive and negative descriptors - it's just what I do - but this one is specifically molded for this song along with its incomparable backing of the Drop Leaf Riddim. If we go back to 'Waiting', we almost see the opposite side of it here as the Cure awaits the day of his release to be reunited with the love of his life. One of the most unforgettable songs of all time.

She lead. I chose 'Rise In Love' to represent Alaine's presence on this list and it's deserved. Although my absolute favourite tune from the singer remains 'No Ordinary Love', this song has a more SPECTACULAR feel to it (largely due to the sterling Guardian Angel Riddim behind it) and is a better statement-making song here. HOWEVER, it serves more as a figurehead than a direct choice: Alaine is THE dominant love song singer of this era of Reggae music. I'd have no problem, at all, stringing together ten quality love/romantic/sensual songs of hers alone, all of which could, arguably, have a place here. I don't think Alaine has any children, but years from now thousands will owe their collective existence to her wonderful craft.
Posted by Achis at 8:05 PM