{Biggup Bredz for coming back and giving us videos . . . unlike our last post}
{Watch him take this out!} 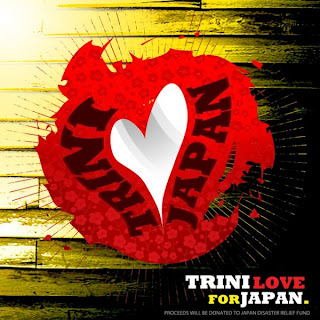 
'Fetting For Days' by Michelle X
First up this week is a very interesting release which has been around for a minute or two but has definitely retained its lustre. "Trini Love For Japan", as you might expect, is a compilation set full of predominately Soca and Reggae music from out of Trinidad which is in tribute to the earthquake disaster of earlier this year on Japanese soil. It's more inspirational music for the most part, but you do well get tunes which are just for . . . MADNESS. So, mixed in between tunes from the likes of Zebulun (with the MASSIVE 'Better Will Come' from a few years back), you get the 2011 sizzler, 'Fetting For Days' by Michelle Xavier & Imij. Also present are Mr. Slaughter, Kes D Band, Rikki Jai and even Edwin Yearwood. Also, there're a few Japanese sets on board. The country is well known as being a hotbed for Reggae music, but they've also a mighty taste for Soca as well. Do pick this one up because, as the cover says, the proceeds of its sale will go to a very good cause.
CD + Digital 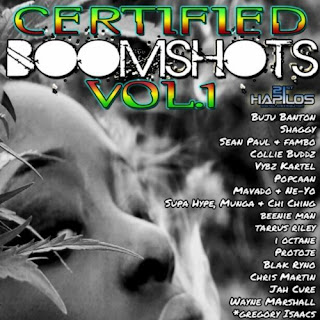 "Certified Boomshots Vol. 1" [21st Hapilos]
The eternally active 21st Hapilos is delivering one of its biggest sets of 2011 in the form of "Certified Boomshots" which seems to be a 'greatest hits' styled release from its many (MANY) releases of this year. I THINK they did something similar to this last year, but whatever it was (if it even actually existed) it's been given an official name (which you can tell by the presence of the "Vol. 1" in the title) and hopefully it sticks around annually, because I do think it is a pretty good idea. Musically speaking, you do know what to expect and more importantly, WHO to expect. Names like Buju Banton, Tarrus Riley, Beenie Man, Kartel, Mavado, I-Octane, Shaggy, Sean Paul and others are on board. So many times you get compilations which're obviously more for the casual crowd, but I think this one would be a step more towards the hardcore fans (not COMPLETELY) and, therefore, an even stronger release for the casual heads, in my opinion.
Digital 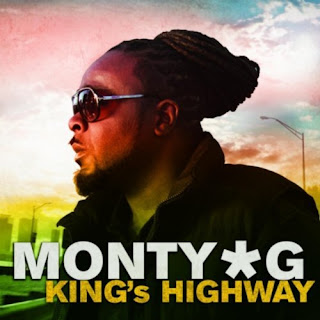 Monty G - "King's Highway" [Lion of Zion]
Following album releases earlier this year from both Peter Runks and Jah Nyne, arguably the biggest name in current Bahamian Reggae music, Monty G, is adding to the lot with his own brand new project, "King's Highway". Monty G is an artist who has always combined Reggae and Dancehall with a more traditional brand of Gospel music and I've never REALLY tuned him and probably for that very reason, but honestly as I listened through the clips on this new album, I was VERY impressed and definitely plan to give it a further listen. You can beat me to that, of course, and pick up "King's Highway" today (the title track, in particular, sounds very strong).
CD [I THINK] + Digital 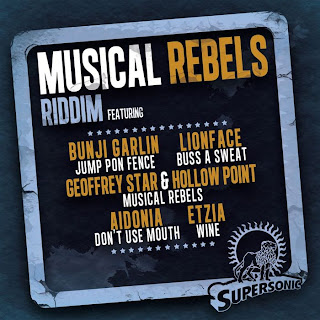 The Musical Rebels Riddim [Supersonic Sound]
Unfortunately, we don't get to hear too much from Supersonic Sound from out of Germany - they don't appear to be very active, but what they do manage to bring is always damn interesting and very good also. They're latest set, the superhype and ultra-colourful Musical Rebels Riddim, is no exception. This thing might take awhile to rise above the standard (at least it did for me), but when it did I saw it was downright hypnotic. Supersonic also chooses a very nice cast of characters to handle the vocals as joining Etzia from out of Sweden, Lion Face and a combination featuring Hollow Point alongside Geoffrey Star is a pair of tunes - one coming from Aidonia in a pretty good form and another coming from a favourite of the label's (and mine), Soca ace, Bunji Garlin.
Digital 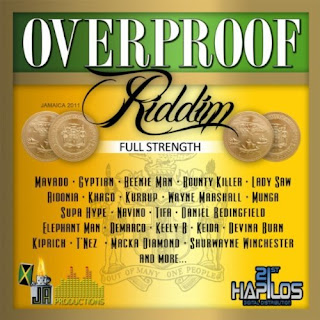 
Riddim Mix
Next in we have the over-stuffed release of the Over Proof Riddim from JA Productions - now at "Full Strength". The riddim itself, I believe, dropped just a few months back and it was released in two different installments in August and September. Here, they've put the two together (and loss the clean version) and here you go. With TWENTY-FIVE tracks in full now you know you can expect pretty much everyone and that's exactly what happens between the likes of Beenie Man, Ele, Gyptian, Bounty Killer, Munga Honourable, Demarco, Mavado, Aidonia, Wayne Marshall, Khago and even Shurwayne Wnichester. I was never terribly interested in this one - it's kind of Poppish/Hip-Hoppish to me - but obviously I was in the minority there so do check it out for yourself.
Digital 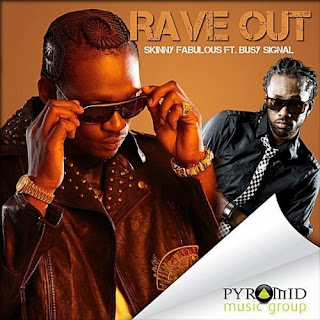 Really cool is the fact that for the first time (I THINK) Pyramid Music Group - one of the managers of St. Vincy Soca fire breather, Skinny Fabulous - has actually released a digital single from the artist. 'Rave Out' was popular this year and was so, definitely, because it linked Skinny with the wonderfully very Soca active and friendly Indiana Jones of the Dancehall, Busy Signal. The tune was insanity and seeing it released is somewhat of a surprise because it just doesn't happen that much, but the fact that it was chosen, if anything was to be selected, shouldn't be a surprise to anyone with its clear 'star-power'. Of course the question now becomes . . . will they deliver an album from Skinny anytime soon? Stay tuned.
Digital
Coming Soon 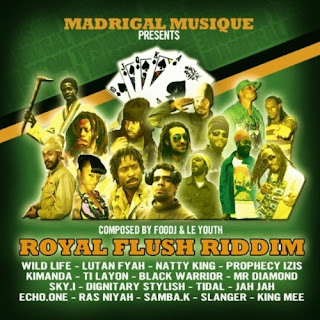 The Royal Flush Riddim [Madrigal Musique]
And lastly this week, FINALLY, is the official releasing of a riddim that we've been listening to for some time now (maybe from late last year?) it's the aptly named Royal Flush Riddim from Madrigal Musique from out of France. This is probably one of the better Roots sets you'll find anywhere recently and Madrigal enlists a very varied group of artists to deal with the all-important vocals. Lutan Fyah headlines a group which also includes Natty King, Wild Life, Ras Nyah, Black Warrior (big tune), Kimanda Cunningham, Tidal and a whole heap of others.
Digital
Posted by Achis at 7:15 PM