"Steppin Out": The Magical World of Busy Signal

Some might call me a bit of a purist and that would be fair in some respects. I find that I've become the same type of person that I've spent the last decade or so complaining about - the older listener of music who complains that 'things just aren't the way that they used to be' - and that does bother me, but - Yeah, I'm kind of right about it. 'Dancehall' isn't Dancehall anymore, it is now, sadly, the neglected child of what used to be called Dancehall and . . . some other shit. However, with that being said, in my old and jaded and disgusting ways, one thing has still prevailed - I biggup ORIGINALITY wherever it exists and these days, in anything resembling Dancehall music, it exists most brightly and vividly inside the mind of Reanno Gordon. No one even comes close to having taken as many musical risks in the name of potentially and often spectacular results. Thus, today we're 'Steppin Out' with ten of the most ADVENTUROUS tunes from the reigning Daredevil of the Dancehall - Busy Signal.

{Note: Tunes appear in no particular order}
{Note 2: List was cut down from twenty-two tracks} 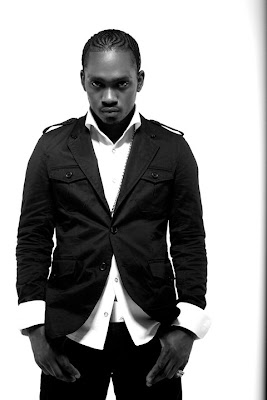 Wining outta control. We probably should've known something was different about this one when this much earlier tune dropped. 'Pon Di Pole' was just a HYPE Soca song and it was good! It wasn't a tune that had a Soca riddim playing behind straight forward and normal Dancehall deejaying, it was a Soca tune in every way and even when it first reached it got a great deal of respect and fittingly so. MAD!
'Da Style Deh'

Ehlelelele. Speaking of madness - it's definitely a work of mad scientry which created the insanity which reigns supreme on 'Da Style Deh' which is probably one of my favourite Busy tunes ever. The song combines a more traditional Afrikan chant with a few different styles and an IMMENSE level of skill. It's maddening in just about every single way possible and imaginative on a level that only Busy can deliver.
'Double Rhyme'

X2. Speaking of imaginative - This tune may not rank alongside the others in terms of PURE oddness, but it is DOMINANT level of applied skill. Somewhat reminiscent of Beenie Man's 'Reverse Di Ting' (to me at least), 'Double Rhyme' was just an exciting exhibition of WAY too much fucking talent!
"Mi gun no have no license, no warranty
So mi war bredda, sista, uncle and mi war auntie!"
'The Gambler'

Risk taker. 'The Gambler' might be a nice nickname of sorts for Busy were it not . . . this thing instead. What can I say? Over the years artists like Lady Saw and Bushman have taken interests in country music and that's strange as hell. Even more odd, however, is Mr. Step Out, Mr. Badman Place turns into someone remaking a Kenny Rogers track. What the fuck!
'Tempted To Touch'

Busy Hammond. Names like Alaine, Romain Virgo, Duane Stephenson, Lukie D, Tarrus Riley and others seemed like natural for "Our Favourite Beres Hammond Songs" - a tribute album from VP Records to the coolest man in the world from earlier this year. Completely unnatural, however, was Busy Signal who, instead of making some hype remake, took on 'Tempted To Touch' in a very straight forward manner that still has us puzzled!
'Sweet Love [Night Shift]'

Giving ya. You might even expect something more like 'Sweet Love' than the previous entrant on this list. This tune featured Busy building a remake with his own verses and added pieces. Of course it was of a song originated by an old Motown Band, The Commodores. Again, I'd be willing to bet that you probably wouldn't hear Aidonia or Bounty Killer or Kartel or even Mavado (or even Wayne Wonder for that matter), but not only did Busy Signal make it work, he made it a bonafide hit!
'Bye Bye'


??? I don't know who - or anything. Where the idea came from for 'Bye Bye' is a mystery to me, but it came off as damn weird, yet increasingly WICKED. This song, like a few others on this list featured REALLY high level material and, if you could manage to cut through the musical aesthetics (slowly, because they're a large part of the fun), there was gold somewhere in there.
'Get Outta My Way'

Count me in. If 'Pon Di Pole' left you unconvinced (shame on you), then certainly 'Get Outta My Way' wrapped up all doubt as to exactly how proficient Busy could be in Soca music (and he has several others as well if you're still not sure). I LOVED this song and for awhile I ranked it even higher than the more famous tune which shared its SLU Records vibed riddim, 'Consider It Done' by Fay-Ann Lyons. It was ABSOLUTE madness and one of my personal favourites from the 2011 season.
'The Letter P'

Platinum phrases. Probably pretty proudly this prime player presented 'The Letter P' which promptly preceded to pull up prominent passing points provided by perpetually partial and polarizing patrons of Dancehall pieces. This was perhaps particularly precise when pertaining to plenty people pointed on the pure and possibly peerless proficiency and prowess performed on this piece and the permanence that this production was positively PRICELESS!
'One More Night'

A million more nights. And lastly Busy Signal also struck gold when he turned in what would become one of his biggest hits to date, this captivating redo of a song originated by PHIL COLLINS (!), 'One More Night'. BOOM! The results were spectacular and, at least in my opinion, really helped to establish this look at the DJ in terms of being something more than the (albeit insanely gifted) 'templated' bad boy that we thought he was at his beginning. Instead of developing on those terms, Busy Signal melted the mould and created his own as an artist willing to try absolutely ANYTHING for a vibe and the Dancehall's most inventive presence in a very long time.
Posted by Achis at 8:18 PM