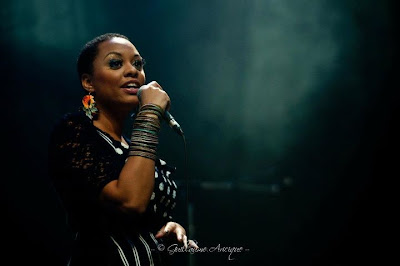 There were fourteen tracks on "The Beautiful Side of A Kreyol Folk Trip", the outstanding debut album from ultra amazing and just as fascinating Gwada songstress, Stevy Mahy, and if you recall that two of the fourteen were non-musical styled interludes, she's now pushed videos for exactly half of the songs on the album as its latest single, 'Si'w Pé', has now gone visual. The tune becomes the album's sixth single in far less than eighteen months and adds even more legs to a trip which, wonderfully, refuses to end. Literally. Things have changed a bit this time around with the biggest difference being the fact that 'Si'w Pé' was actually shot on location in the Ivory Coast and, once again, Stevy Mahy and co. have managed to put together a stunning visual display for the song.

Despite the change of locale, they also managed to stay 'on course' in regards to the way in which Mahy has gone about presenting her music. There is no LARGE shift in this video from its predecessors in the basic look of it (although it is slightly 'heavier' in colours, but I would think that was more a result to the weather at the time as opposed to any type of deliberate choice) and while it does stand out from the pack, it doesn't based on anything which is . . . ridiculous. Two things (actually three) really highlight the video for 'Si'w Pé' to my eyes and the first is the same thing that highlights the actual tune. The 'bridge' (I think that's what it's called in smart music people talk) on this song is spectacular - it just is - and it's observed in the visuals as you start to see more impacting images of the weather and people in it and later, when it returns, it happens again and that's just a case of definitely taking advantage of what you have. At the same thing, one of the other things which really grabs the attention is just how that aspect of the video interacts with the more PEACEFUL setting of it. THE lasting image here is of Mahy sitting on the bench with her two friends and what a coincidence that this most serene of shots is totally without rain or any urgency. It's total enjoyment and relaxation.

Of course, I have to mention that later on in the video she looks amazing walking down the street singing the song and also, earlier on, we see Stevy Mahy (who is, reportedly, making her debut performance in Haiti later this week) . . . resting in bed, listening to the radio while, presumably, writing a song to a riddim. I've said it dozens of times before and I'll say it several dozens more: Stevy Mahy is a VERY sexy human being and she generally looks even more so without trying to AT ALL.

So, while completely unsurprising, Stevy Mahy puts together yet another stirring visual display of her very visual music. It retains prevailing qualities such as its overall beauty and peaceful nature, while adding the large twist of being shot on Afrikan soil and showing just how global this amazing vibe can be.
Posted by Achis at 9:19 PM