Like I've constantly said over the years, when you can actually SEE the words written with your own eyes, it can be a very powerful thing. Of course listening is just as powerful, even more so, but really, aren't you more likely to trust two of your senses more than just one? It is when they're working together that you really began to SEE things that maybe you didn't hear. By that very notion, we take a look today at someone who I feel REALLY is going to go down as one of the most strikingly underrated and underappreciated lyricists and writers of this era. He certainly does get credit and receives more and more as he does more and more work - but as an artist overall - and not for the actual construction of his messages. Today we try to challenge that by observing ten totally random stunning stanzas of the spoken word by one of the most powerful Virgin Islands act on the scene today and EVER - NiyoRah.

'African Chant' featuring Pressure Busspipe
"Rastafari recognize di root of it all!
Dis yah iniversal concept is di truth of it all!
You must remember babylon denomination dominate dominion amphibian opinion-
Di spook of it all!
Afrika levitify and purify Earth
I am not doubting my essence
Mi nah scrutinize worth
Plant mi okra, mi ganja-
Maximize earth!
Multicomplex complexion: Blacker than dirt!
Permedial structure, six pointed, erect and invert
Like locks to Rasta, firmaments are antennas to earth
Breath of life, better life inna Kilimanjaro!
Afrika strive, gathering might, now the cock it ah crow
Trumpet sound!
Gather around! Just lift up unuh voice!
Man anoint ganja joint, the ash give it spice
We got - foods for yah belly and di herbs to heal
Plain and simple, know it as it is"

By any means, I will defend di poor
I will shoot a wicked man and close di coffin door
Militant. Sometime the lion roar
You must defend and don't pretend that Jah Jah isn't pure
It doesn't mean that we must just relax
Dem slaughter us wid prices and dem murder wi wid tax
They make it hard, for any of us to make-
A decent cup of juice, sufficient meal upon di plate"

"The Ancient is hardly seen in babylon
But what I never see I & I know lives on
Because inside of me, I feel di vibration
No temptation to break your concentration
Life is the testimony to The Absolute
There is no discrimination in this ghetto youth
Fornication and hate, it will be rebuked
Chase di wicked man away with the drums and flute
We are living life to make it better
The places, which are dry, to make it wetter
Life is not a game, like pool or checkers
I REPRESENT DI ONE WHO HOLD THE SCEPTER"

"In this world of modern technology
Di Rastaman ah trod it anciently
Wi build di Pyramids and Golden City
Fighting for the betterment of my community
Di ghetto youth dem powerful, can't you see?
Farmers bringing food in from di far country
I see my people full of loyalty
Di Emperors and Empresses in royalty"

"Even if gossip talk, no mek it stray yah medi
Love is within yah heart, which mean you ever ready
Mek di Kette Drum talk -
My people hold it steady
Firm like a Lion, with Tafari Jah Selassie Haile
Look at how dem ah trace-
You call up on di telly
So much time deh ah waste, wid bad intelligency
Dutty power in place, of Black woman
Authentic germ dem ah buy out, every block wi build throughout di century
Hand up deh let it raise!-
If unno cup no empty
NiyoRah trod it brave, fi bun dem penitentiary
Wi must not be afraid whenever being friendly
Learn how to fly out of di trap within di mental slavery
Being locked inna cage is not a life for babies
Naked on di front page is not a life for ladies
Rest assured, put your faith within the better phases
Life wouldn't die out, but you are di one to make di changes"

"I KNOW!
ONE DAY!
WE SHALL SEE!
Babylon go UNDER!
DOWN DEH!
In di heat
I & I seh RASTA!
CONQUER!
ENEMIES!
Ghetto people RISE UP!
TRAMPLE!
JEALOUSY!

"Don't you know-
Life is a blessing from The Most High
It is electro-magnetic, with The Father, I'm going to keep a close eye
From San Francsico, to the Big Apple-
Changes will occur in the whole sky
So spread the info, to every chapel:
Loving from good people, no it won't die

Rain is falling
Tears from ancestors is dropping
No more stalling
Years under pressure, now they're flopping
Babylon bawling
Look yah now the righteous man is smiling
Zion is calling
Can't you see the angels are arriving?"

"Di yute weh buss dem gun fi fun and ah mek blood run
Jah carry dem home!
Di poor Princess weh sell her body fi money
Jah Jah carry her home!
For I have been a victim of, my environment and ignorant thoughts
But my intent is genuine
So be a  better man than I have been 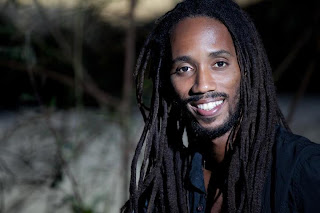