'No Sidekick': A review of "In Gambia" by Sizzla Kalonji 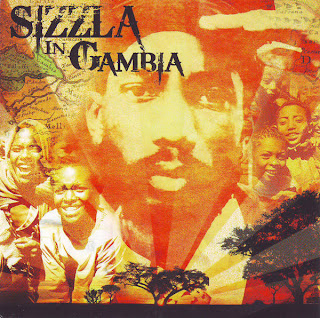 Still excited. As I currently look across the potential platter of Reggae album releases for the final seven months of 2012, I'm very intrigued and extremely optimistic. If it those months can collectively deliver even a half of what the first five did, then 2012 will prove to be the single most interesting year for Reggae albums in a really long time. It's just been that good and it may get even better if some of the big and talented names show up for the next portion. On my radar are people like maybe Agent Sasco, Batch, Saïk, Admiral T, NiyoRah and maybe even Lady Sweety and I'm smiling until my face begins to cramp up because of it (seriously, if Lady Sweety does an album this year . . . Just leave me alone. Don't call me, don't email me, don't have a question, don't do shit!). And you'll add that to a lineup which, as we showed you just a few days back, has been downright supreme - the quality and names of artists who have jumped in with projects for this year. It's all been amazing and hopefully it can continue. In saying that, however, and in standing here (I'm actually sitting down now), I can look through names such as Tarrus Riley, Busy Signal, I-Octane, Konshens, Midnite, The Nazarenes, Toussaint The Liberator and everyone else, but the one who shines brightest, and who always will at least for me (and at least until 2028-ish when my daughter becomes Soca Queen of the Entire World), remains Sizzla Kalonji. I don't care that I was super curious as to what a debut album from I-Octane would FINALLY turn out to be, or that Tarrus Riley just went and turn the vibes on EVERYONE unexpectedly and I don't care that Saïk may just break lyrical speed records with his next project or that I get to go and brush up on my general intelligence for Ras Batch's forthcoming work - it's all somewhat dwarfed by the fact that the guy named Sizzla did two albums in about a month . . . Again. It's like circa 2004 all over again and I couldn't be happier in terms of the situation itself and while I can't envision that this would continue for too much longer so I'm going to go ahead and appreciate it now, but can you imagine if he just started a very Midnite-ish release schedule of packing the early months of year after year with a pair of albums?


This project was reportedly at least partly recorded in Gambia before being completed in Jamaica and, most notably, DJ Karim from Stainless did a great deal of work on it. DJ Karim's is a name definitely warranting a great deal of respect and his own style, usually, is one very diverse so you can also well see his influence on the record. So! It's customary, at least that's what I've been told, by people of manners to welcome you when you arrive and that's exactly what Sizzla Kalonji does to get started on his latest set, "In Gambia" on the succinctly titled and WELL eclectic 'Welcome To Africa'. This song, for as strange as it most certainly is, is one which is going to grow on you VERY quickly. It's the big and flashy opener, but it's also a very poignant track which is calling ALL of the continent's sons and daughters back home! In next is the lovely 'Blackman Rise', which is a piece really calling for men and women of Afrikan descent to really just STEP UP! It's not much a complicated or expansive type of composition, it's largely straightforward, but in that directedness is a very strong tune. And completing the first few tracks on "In Gambia" is the HUGE sounding 'Woman of Creation'. While I'm not crazy about this one at all, its vibe makes it a definitive standout on the album and I'm pretty sure that I'm in the vast minority in my lack of grand appreciation for it. Still, it definitely isn't a bad song at all.

For me, the real BOOM on this album comes right at the start of its second half. Much like the opener, 'Make A Visit', is pretty odd, but it's absolutely SATURATED in star quality in its destructive goodness.

With not much in terms of structure going for it, the tune delivers what has to be regarded as one of the finest verses this year (which you just read) and does so full on effortlessly describing something  You and I should have been on hand to see. And speaking of something nice to see and speaking of big verses there is this:

The song, 'Gambian Girls', is another with a very strange vibes it (sounding like a HEAVY track, but turning out to be one for the girls). Sandwiching that song is another pair of some of the best material to be found "In Gambia" (did you catch that ???), 'Let It Grow' and 'Planet In Peril'. The former is the only combination on the album, this one featuring loooooooong time Kalonji spar, Congo Jesse Jendah. The former residents Xterminator (biggup Xterminator), link on a song with  HEAVY riddim which may have some ostensible Hip-Hop colours mixed in (it does), but you hear that KNOCKING track playing in there and hopefully you'll smile like I did - so big that your lips run into your ears. When all the talk of Sizzla in Afrika reached, wonderfully Jesse was involved in a great deal of it and for someone who has been involved as long as he has without getting what I think is his proper respect, he hasn't lost a step at all and I'm always looking out for big things from him. As for 'Planet In Peril' - MAD!

“Tell dem every time seh a love a di solution
World leaders look a new resolution
Industrial companies ah cause di pollution
Di people doesn’t like it, so wi cause a revolution
Babylon ah wonder what di Rastaman made of
Just know Selassie I name mi ah praise up
None of dem can stop di fyah mi ah blaze up
Cause every time you look you si di food price ah raise up
Kill out di boys and they kill out di girls
Destroy Mother Nature and they’re drilling up the Earth
Fighting for di power, through dem waah rule di world
None a dem no great like Selassie I The First
Nuclear warfare, nobody free
Babylon ah dump all a di rubbish inna di sea
Killing vegetation, no cutting down the trees!
Where are di birds and di bees?

Hey, make sure you answer when The Almighty call
Tell you every time babylon haffi go fall
Afrikan people, you gotta stand tall
Why is it di people dem ah suffer inna Somalia
The ozone layer been depleted
SEEMS AS IF YOU WANT DI HUMAN RACE TO BE DELETED
The Almighty works not yet completed
People all over di world been mistreated
Tell di people dem turn to God
Do all the good and don’t do no bad
Everybody don’t love, you’re not happy, you’re always sad
Unite my people, live in love and be glad

This song turns out to be one MASSIVE piece of pissed off BRILLIANT social commentary and a highlight in so many ways for "In Gambia". The really cool 'Where Is the Love' and 'Branded African' wrap up the second half of the album. The first of these takes a bit of work and it still isn't one of my favourites here, but I don't have any problems with it and the latter turns up the flames again over a very curious riddim. This track really just goes to instill and enthuse some pride in the Children of Afrika (it reminds me of 'Shaka Zulu Pickney' by Tarrus Riley), with some really powerful words from Kalonji.

Also check, 'Feed The Children', which is somewhat similar to 'Woman of Creation', with its large sound, but I do really like this song and I did from the very first spin. There's also another fine social commentary in 'Too Much War', which is a winner to my ears. This selection did require more than a couple of spins to really light up for me, but these days, I hear it as a mighty track and a glowing piece for the album. And lastly is 'Nothing Can Wrong' which is a song that could well be called 'controversial'. You'll hear it and decide for yourself, however, it isn't nearly damning as some of Kalonji's older tunes on the subject and I say that VERY loosely.