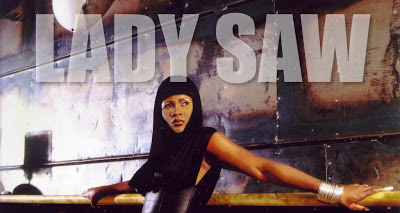 Though Beenie Man once proclaimed himself the 'King of The Dancehall' (and technically does so over and over again every time someone listens to that song) (and would do so again if you asked him to) and has certainly had a sensational career, ultimately such a declaration, in regards to whoever, is a matter of opinion. Someone could (and has), rather easily, say the same thing about Yellowman (whose inherent nickname is 'KING' -- as in - “King of the Dancehall") (biggup King Yellowman), Shabba Ranking, Bounty Killer and a number of other artists as well. HOWEVER, when it comes to the matriarch of the genre, things are much more clear and are, essentially, a matter of fact. Despite the presences of a few longtime peers who have been ultra-talented and have made great contributions to the music, the title of 'Queen of The Dancehall' is one which is virtually indisputable it currently belongs and has belonged to infamous Lady Saw for a long time and, again, even with the arrival of newer crucial talents throughout the years, even THOSE artists are likely to give her the crown. Today we take a look back at part of her journey and how she has come to be one of the most respected stars the genre has ever seen. Discography: Lady Saw 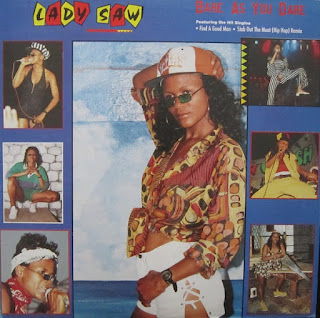 
Run it. Although Lady Saw's actual debut set, “Bare As You Dare”, has been all but forgotten two decades on, this is an album which would directly set the stage for what was to come for the rising DJ. The Sampalue produced project featured a version of Saw well ahead of her prime years, but still exceedingly capable in just her early twenties at the time. The title track, which featured Ghost, stands out now by memory, but it does so after a pair of her early big hits, 'Find A Good Man' and the downright outrageous 'Stab Out The Meat', in its Hip-Hop remix form. There was also 'Bad Inna Bed' and a couple of others. Definitely not her opus, the debut still very much carried out its purpose and you'd have to dig hard to find it these days, but it still does hold a nostalgic value (though nearly all of it would be inhaled by the next release). 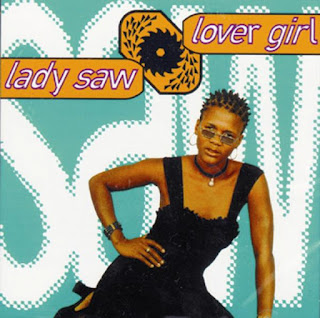 
Upgrade. It wouldn't take very long at all for Lady Saw to attract the attention of the label with whom she would do her business for the next thirteen years, VP Records, and in 1994 she would begin her working relationship with the label with "Lover Girl". It is very interesting now, looking back, at how this album came through. It was very much a 'mainstreaming' (in terms of in Reggae circles and only in Reggae circles at the time) of the young controversial star. To make the point, tunes would be drawn in combination with Frankie Paul, Luciano and even the legendary Dennis Brown. "Lover Girl", essentially, was an expanded installment of its predecessor. It would share NINE of the ten tracks on "Bare As You Dare", including most of the more risqué material (DUH!), but it was pushed alongside softer and more conscious moments for the more apprehensive Reggae fan who, obviously, responded. 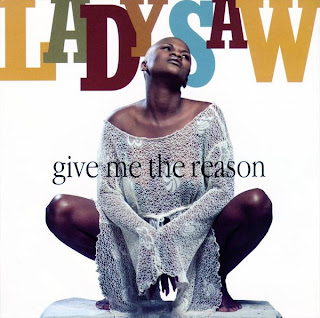 
Good wuk. Personally, there aren't many more musically pleasing vibes to my ears than a prime level of Lady Saw and although you could argue that her prime years were somewhat brief, what she did give us was terribly impressive. To my opinion, only one album captures that MAD sound better than "Give Me The Reason" ("Raw" not included, of course) which, like its two predecessors, was also produced by Sampalue. Over the riddims of the late 1990's/early 2000's, Saw was dominant and it was shining all over this set. Also, while you do get what you'd expect on songs like 'Good Wuk', 'Darnest Things' and the retrospectively HILARIOUS 'Life Without Dick':

"Life without Dick could never be nice
If mi caan have Dick then I will never survive!
When all mi friend gone, him stand by mi side
Keep mi alive morning, noon and night"

Saw also gave bonafide winners of social and cultural significance, as well as tunes against those who thought her some type of 'one trick pony'.  Check 'Condom' and the downright masterful 'What Is Slackness?'

There was also the countrified title track which remains one of her most well known pieces to date and has well contributed to the album named after it not fading away as, despite not being hugely popular, "Give Me The Reason" is still well known and has aged very well. 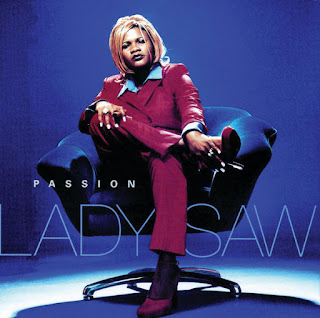 
Passion project. Speaking of remaining popular - Even sixteen years after its release, one could very well make the case that "Passion" is still Lady Saw's most well known album. I would also make that case and, to go further, I would also say it is her finest. From the standpoint of strictly being a display of talent, "Passion" was off the charts. It was simply somewhere else and despite its title and its cover and everything, which was almost over-sexual, to my opinion, "Passion" was a GRIMY album. It had a great deal of bite to it and that was where it actually excelled. Songs such as 'Sycamore Tree', 'Na Nurse', 'Woman Wi Name' (MAD!), 'Long Til It Bend', 'A Just The Wuk', Wuk With You' and others featured a version of the DJ at or near her finest. Others still such as 'Raw' and 'Healing' added more flames as did the presence of the likes of Beenie Man, Shaggy, Merciless and Hip-Hopper DJ Clue. 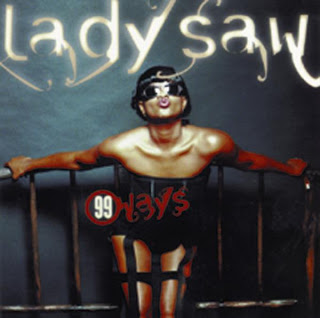 
100%. Though not as good as its most immediate predecessor, "99 Ways", very much, was a similar album to "Passion". In this case, its cover would certainly suggest what was to come, again, "99 Ways" was wonderfully unpolished and rough around the proverbial edges. What it lacked in the amazing - the album would make up for with consistency (it may even be more steady than albums on this post which I regard as greater pieces of work on the whole). Numerous highlights included the title track, 'Oh Yeah', 'No Matta Me', 'Don't Even Stress Dat' and others. Tapped to help were Red Rat, TOK and Sanchez, who joined Lady Saw on a remake of the classic 'Picture on the Wall' by Freddie McKay. Also, as usual, Saw worked alongside some truly brilliant maestros for "99 Ways" including Tony and Dave Kelly, Shocking Vibes, Main Street and Sampalue. This was an album which may not have aged well in terms of its popularity, but it is still a very good set and one which is well worth the pick up if you haven't already… and who knew it would be SIX FUCKING YEARS before she'd make another one. 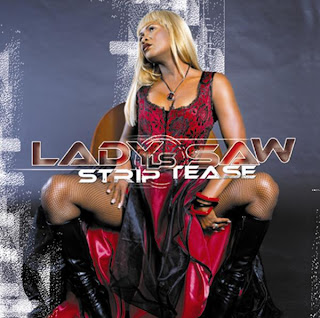 
Been so long. For reasons which are not totally related to music, "Strip Tease" may just be the most INTERESTING album Lady Saw has ever done. First of all is the obvious: It had been six years from last we received an album from Saw and, as you can see, it took her all of three years to do her previous three album releases and although she routinely released singles along the way and her albums were somewhat like compilations (which was just what they did at the time), Lady Saw's albums were very big deals and were, presumably, quite successful also. Also, if I recall correctly (and I rarely do), we knew about this album well ahead of its release date and even knew that it was going to be called "Strip Tease" maybe more than a year before it reached. On top of that, I think that "Strip Tease" was the first album she did when her status as being the 'Queen of The Dancehall' had been cemented and solidified. Saw was still somewhat of an up and comer prior to it, but the six years, which had also been fruitful for her, had changed all of that. "Strip Tease" was not her greatest piece of work, but it wasn't bad either and it was also very popular -- carrying hits such as 'I've Got Your Man', 'Man Is The Least' and 'Loser', alongside Ce'Cile ensured that. There were also impressive moments such as 'Thug Loving', 'Best Pum Pum' and the similarly titled [WHAT!] brilliantly chaotic 'Pretty Pussy'. Voicemail and Sizzla Kalonji also guested. 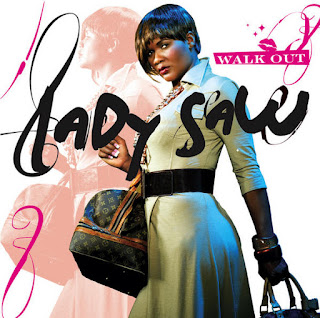 
'No Less Than A Woman [Infertility]'


Pack your bags. Following a relationship which dated back thirteen years and had produced five previous albums, Lady Saw had fulfilled her final contractual obligations with VP Records and was set to "Walk Out" with her sixth and final project for the label. Here was another album, obviously, with a great deal of 'back story' to it, but I'm happy to say that my lasting impression of "Walk Out" is about the music and just how good it was. It is no worse than the third best album she's ever done and, perhaps, if you wanted to say that it was better than "Give Me The Reason", it wouldn't be such a huge stretch (I'd disagree with you, of course, but you could make the point). "Walk Out" was kind of an updated edition of the "99 Ways" album. It, too, was kind of rough, but it was HYPE as well and really brought in a great deal of energy. 'Chat To Mi Back', the title track, 'Me and My Crew', 'Big Up', 'It's Like That' (MAD!) definitely brought the force to the album and even when things slowed down, Saw managed to thrill. Most notable was 'No Less Than A Woman' on which she, very publicly, expressed her feelings on being unable to give birth to her own children. 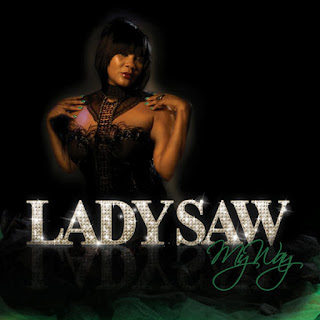 
At the controls. For her first non-VP Records album in almost twenty years, Lady Saw would deliver the very fittingly titled "My Way", for Toasting Music and her very own Diva Records imprint. Looking back, she did very well on her own. She gave us a fifteen track album which was (and remains) readily available on both digital and physical format (something she gets even higher marks for these days because such a thing isn't always inevitable, even from big named artists) and, in retrospect, in its time "My Way" was very well promoted and people seemed to, appropriately respect the project at least because it was a Lady Saw album. There were videos. There was some type of contest and a great deal of general discussion surrounding the release which was a big deal. Musically, "My Way unsurprisingly had a freer feel to it, but it wasn't such a great deviation from the "Walk Out" album either. It didn't come in with a 'mainstream' approach. I've really grown to enjoy the title tune from this album, which now ranks alongside my initial favourites here such as 'Tighta' and 'Me Hold Yuh'. The album also, presumably, is a bit of an indication of how Lady Saw plans to do her album business in the future and as it is now approaching three years (and she has been having another nice year in 2013),
Posted by Achis at 11:14 PM