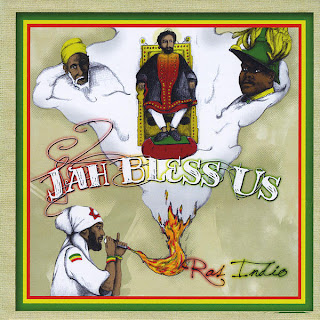 
On the recommendation from one our wonderful readers who was under the impression that "Jah Bless Us", the most recent album release from WICKED Belizean chanter, Ras Indio, was a modern classic, I've gone back to give the album another healthy listen (always looking for modern classics and I believe I've already picked the next album, so maybe look for that next week) and though I'm still working on it (no rush), "Jah Bless Us" is definitely the type of album which I can see growing and growing and growing on me to the point where, like several of the albums we've featured thus far (including the latest one) (biggup Ziggi), I can very much see it at some point just dazzling me on that level. What you most remember about this album is the title track, which may just be one of the best songs I've ever heard and then the fact that the album carried four-hundred tunes. Also standing out was that Indio and company tapped a very talented group of vocalists to work alongside him and "Jah Bless Us" featured contributions from Turbulence, Chezidek, Luciano, Lutan Fyah and Ras Attitude - which was just fantastic. So while it remains to be seen if I'll ever declare it a full classic (though I'm leaning one way these days), what should be clear is that YOU, if you haven't heard should pick it up "Jah Bless Us" immediately. 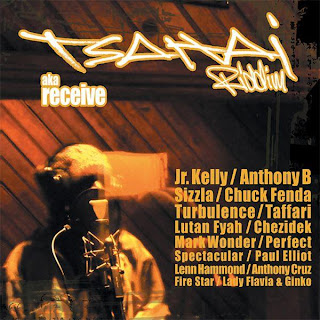 
Also in my sights lately has been yet another track produced by the ultra-active and currently downright unavoidable Al.Ta.Fa.An Records, the Tsahai Riddim. Probably their most popular release to date, if I recall correctly, the riddim was actually named after Lutan Fyah's daughter and definitely achieved its biggest lot of notoriety based on the fact that it supported the tune, 'Receive' from Junior Kelly (new album, produced by Al.Ta.Fa.An, "Piece of The Pie", in stores now). Kelly and the Fyah were joined by a truly fantastic lineup of vocalists which definitely would make this one of the most amazingly 'adorned' sets of its time. Turbulence, Perfect Giddimani, Chuck Fenda, Anthony B, Paul Elliot, Lenn Hammond, Chezidek, MARK WONDER and even Sizzla Kalonji all voiced the Tsahai which is probably one of the biggest Roots tracks from since the turn of the century and is still very easy to find if you haven't picked it up yet. 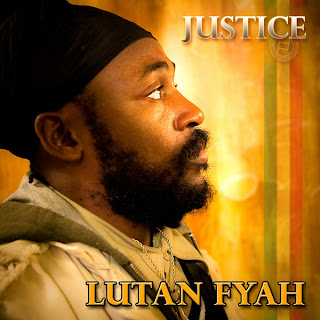 
Speaking of Lutan Fyah and, perhaps, future modern classics, also on my radars these days has been another album which is, and has probably been from the first time that I heard it, on the verge of taking that next step, "Justice" by the Fyah. Initially, my reasoning for not giving it that extra kind of push towards being that GREAT album was that "Justice" was wholly solid, but it lacked something which continuously amazed the listener and, in Lutan Fyah's case, with albums such as "Time & Place" and definitely "Phantom War" (one of the greatest albums ever made), you know that that level does exist for him. HOWEVER, "Justice" is also, arguably, the greatest lyrical display he has ever put on an album (which is saying a great deal if you know his music), so coming with a 'time-delayed' approach to greatness in this case is no surprise at all (and you could also say the same thing about "Truly", Lutan Fyah's latest album). If you really dig into what is being said here, and specifically what is being said here, you know that in that aspect, it's been a classic for four years and biggup Philadub Records who put it all together. 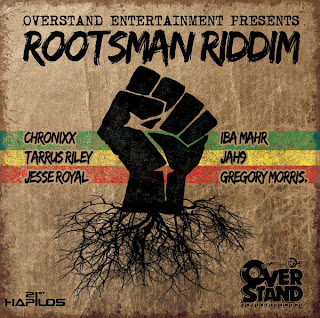 
We mentioned the Rootsman Riddim from Overstand Entertainment a few months back and I've gotten more and more in tune with it from then and I'm damn impressed by it. A remake of the track for an old Ini Kamoze tune, 'Wings With Me' (biggup our reader who told us that) (I knew that it was familiar), the best thing that I can say about the Rootsman is that it may just be one of the most INTELLIGENT tracks that you're going to hear. What I mean is that if you listen to a track and then listen to the songs over it, there usually is some type of quality theme that emerges. You can have great riddims which birth awful songs and you can have kind of mediocre tracks which, for some reason, just brings out the best in more than a few artists. In this case, the Rootsman Riddim REALLY brings out some fantastic lyrical performances. Of course on that topic credit has to go to the small but incredibly talented vocalists who are fortunate enough to voice it - Tarrus Riley leads a group of downright lethal up and comers in Iba Mahr, Jesse Royal, Chronixx and the linguistically towering Jah9. Very strong!

"Jah people dem ah bawl, seh dem tired a mediocre
Evil ahgo fall when wi troddin a Ethiopia
Believin from dawn, cah dem life no easy bout yah
Even Banton seh 'it's not an easy road'
Operation!
Occupy The Motherland
Calling all soldiers to kindly trod along
From creation!
It right in Jah Jah plan
But Chronixx caan do it alone!" 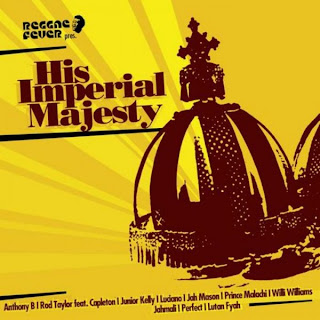 
Something very interesting which popped up not very long ago is the His Imperial Majesty Riddim from Reggae Fever. I believe Reggae Fever's remake version originates just a few years back and I'm familiar with a few tunes here, but it also appears as if they've done some new recordings and added to the lot and have now presented it in a long overdue, but well worth the wait, digital release. Of course the tune most known with the track is present - Rod Taylor's sterling title track (and its remix alongside Capleton) and I recognize other tunes from Willie Williams, Luciano, Prince Malachi, Junior Kelly and Anthony B, but others from Perfect Giddimani, Lutan Fyah and Jahmali are new to my eyes and ears. However, with that being said, there's also a tune on this riddim by the name of 'No Time' which, quietly, may just be one of the best songs Jah Mason has ever done. Biggup Reggae Fever because they've also, apparently, done the same thing with the Milk & Honey which I'll certainly get to at some point. 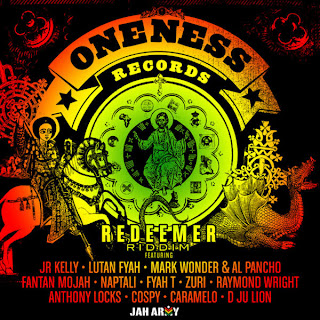 
Credit the aforementioned Junior Kelly (have I mentioned that he has new album, "Piece of The Pie", in stores now???) for drawing my attention back in the direction of one of my favourite riddims from one of my favourite labels, the Redeemer from Oneness Records. His tune here, 'Heads Up' was one of the best and it had a great deal of company. As usual, Oneness assembled a more than respectable lineup of vocalists which included tunes from Naptali, Lutan Fyah ["a juss a likkle bag a herbs Mr. Officer"], big voiced Raymond Wright, Mark Wonder alongside Al Pancho and a few others. As we find when we check back occasionally, Oneness' catalog has been a fine one and I'm always digging into it and lately I've been, once again, thrilled by the Redeemer. 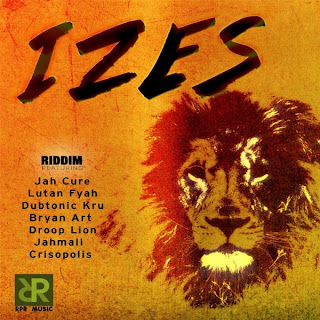 
A big credit goes to Rpr Music for dropping a track either very early this year or very late last year, the Izes Riddim which although, like the Rootsman, it is quite short, is very impressive. This one has really stayed in my ears (even before I knew that they had officially released it) because it just happened to back the single best Jah Cure song that I've heard in maybe a couple of years (or longer), the AWESOME 'Jah Rule the Universe' (TEARS!). But the Cure wasn't alone and he was joined by Lutan Fyah, the Dubtonic Kru, Jahmali and others who really made an even nice listen of the already very lovely Izes Riddim. 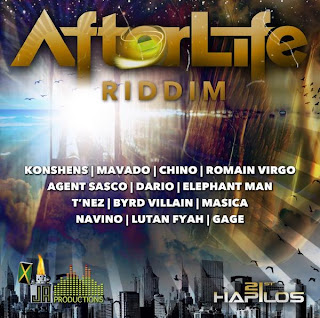 
Although I definitely did appreciate certain tunes from it, I don't know that I have ever had as great of an appreciation for the ARMED AfterLife Riddim from JA Productions than I do now. Songs from the likes of Romain Virgo, Lutan Fyah and, definitely Agent Sasco were easy standouts for me, but these days I'm also liking songs from Chino, Ele, Navino and even Mavado which is… just odd for me to be saying, but the riddim itself is damn infectious and now I guess I'm infected. Not complaining. 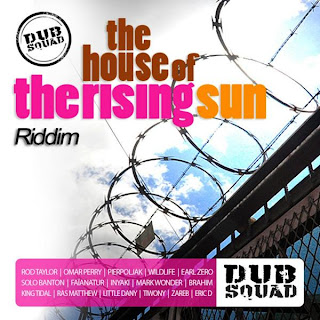 The House of The Rising Sun Riddim [Dub Squad Productions - 2012]


TEARS! I've definitely been enjoying the full House of The Rising Sun Riddim from Dub Squad Productions, but in particular has been this AMAZING song from the AMAZING Mark Wonder, 'Born To Be King'! 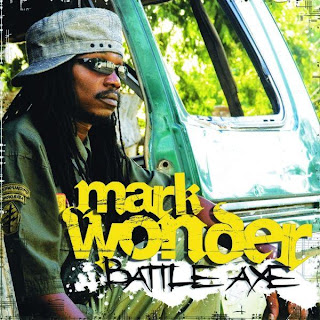 
Lastly, I continue with the genius that is Mark Wonder. He is someone who I'm always listening to and whose music I'm constantly examining because, even if you dig just a little, it has this quality of developing right in front of you and it may or may not be from an intense lyrical focus and/or point of view, but he makes music which continues to progress further and further. Because of that, I don't know that I've ever TRULY finished with something that he's done and taken in EVERYTHING there was to get from it, but you know that I'm still working on it (and you should join me in that). These days, particularly, I'm dealing with an EP he did from a few years ago from the well reliable Special Delivery, "Battle Axe". "Battle Axe" was a release of four GOLDEN tunes, ''Let's Live', 'Shape The Future', 'Nothing A Gwaan', 'Jah Never Fail I'. I'm mostly focused on the latter two these and it has been 'Nothing A Gwaan' which has been doing some sensational things especially. So check this one out as well if you haven't (you've had four years to do so, what the hell is wrong with you?!) and biggup The Dragonslayer, Mark Wonder.

Digital
Posted by Achis at 2:35 PM