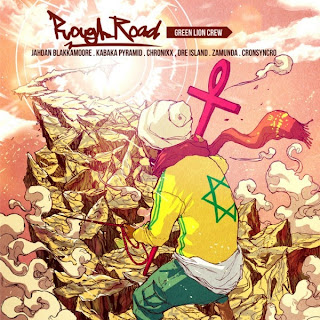 
Grrrr! First up today we have a project that seems like it’s been on the radars for quite some time now which is finally coming to fruition as the Green Lion Crew delivers their latest piece of work through our friends as Soul of The Lion, the Rough Road Riddim, which is an absolute stroke of genius. This HEAVY track features a slight Hip-Hop texture to it, but it comes through in a way which is damn attractive to Reggae heads as well, particularly when it goes to the vocalists. Which vocalists? The burgeoning and WICKED Dre Island and Cron Syncro join the likes of Zamunda, Chronixx and Jahdan Blakkamoore. However, while they all do offer up excellent tunes (particularly Dre Island and Chronixx), running the Rough Road is a lyrically DOMINANT Kabaka Pyramid, whose 'Liberal Opposer' takes top honours here. A big riddim and while you wish there was more of it, there's nothing which should keep you from picking this up right now. 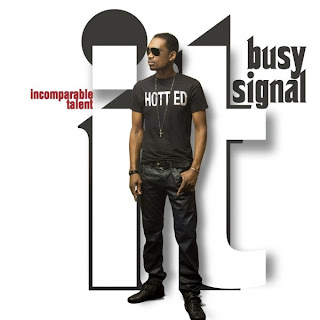 
"Incomparable" is a big word (and it's one of my personal favourites), but Dancehall star, Busy Signal has no problem at all adopting it for his latest EP release, "Incomparable Talent" from his own Turf Music imprint and VPAL. Essentially, the set is a compilation of his work from earlier this year and maybe one or two from late 2012 as well. The six track piece is highlighted by tunes such as 'Bad Up Who', 'Bedroom Bully', 'Set Up' and others. Definitely not expecting the second half of 2013 to bring a new album from the DJ who reigned supreme last year, but 2013 has been a fine one for him still and if you haven't been paying attention, here is an excellent way to catch up. 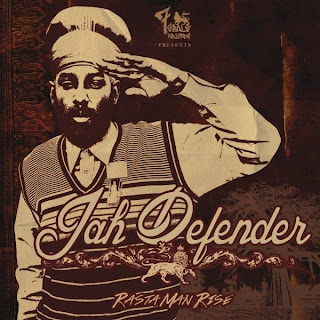 
Haven't heard much from dependable French label, 7 Seals Records, in 2013, but apparently they've been hard at work on projects which are now reaching. Along with the forthcoming Simple Riddim [June 22], you can already check out what is certainly their most crucial set to date, the debut album of impressive Trini vocalist Jah Defender, "Rastaman Rise". The Defender is someone who may not have come through in the way in which most Trini stars seem to with this definitive MASSIVE hit, but he's definitely paid his dues and I was very happy that 7SR took an interest in his work to the point of wanting to do an album with him and it's already here. I haven't heard the full album here (anytime now Bredz), but just listening through the clips, it sounds pretty impressive and I might slap a review on it when I get my paws on it. Don't wait for me though - see for yourself and pick up "Rastaman Rise" by Jah Defender today. The flaming Tiwony guests. 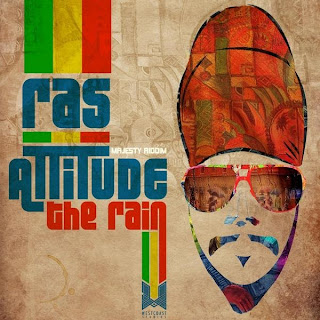 
West Coast Studios from out of Morocco continues with a big year of their own as soon after delivering a nice single from VI star, NiyoRah, by the name of 'Dirty Streets', the label is already back at work in dealing with another light from out of the VI, Ras Attitude. The well-reliable chanter delivers one of the single best songs I've heard in 2013 so far, 'The Rain'. This one just pulls an incredibly beautiful inspirational vibes and it proves to probably be one of the better songs that I've heard from Attitude in more than a little while (if you placed it on his most recent album, "Hold The Vibes", it would be the best song on that album in my opinion). It's excellent! Check it out for yourself today. BOOM! 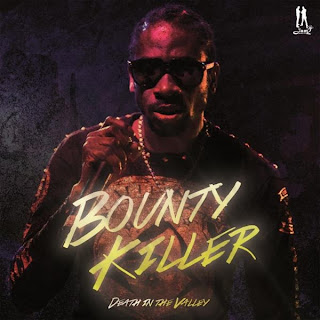 'Death In The Valley' by Bounty Killer [Jam2 Productions]


I have NO idea why Jam2 decided to now make available Bounty Killer's 'Death In The Valley', and all of its gorgeous madness five or six years now following its release but… yeah, who cares why? This tune was ridiculous and it was quintessential wonderfully angry and brilliant Killer. 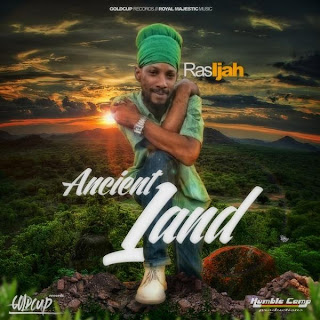 
We apparently quite a reaction the last time we mentioned this tune, so I thought that we'd bring it back just in case you missed it. Do be sure to check out the latest from veteran Ras Ijah, the BIG 'Ancient Land', courtesy of Humble Camp Productions and Royal Majestic Music for the always reliable Goldcup Records. BOOM! 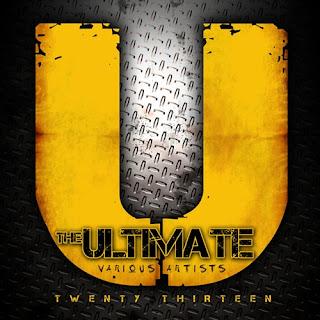 
And finally up this week is the yearly edition of Tad's Records' giant compilation, "The Ultimate". This year, like pretty much all of them, you already know what you're getting as basically EVERY song on the album comes from one of the 'usual suspects'. The twenty six tracks feature the work of Mavado (seven times!), Kartel, Aidonia, I-Octane, Beenie Man and blah blah blah. 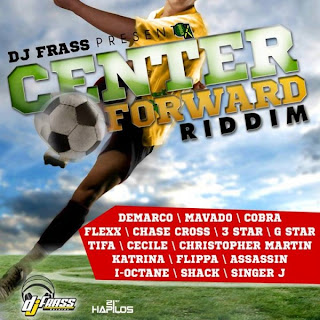 
Coming soon this week is the latest from DJ Frass who is, not so quietly, making a big case for producer/label of the year in 2013, the WICKED Center Forward Riddim. If you follow Frass' tracks, then you know he's been on a tear this year and the new riddim is no deviation from his previous levels. This is outstanding, authentic and modern Dancehall with an old school blend to it and, when placed in the proper hands, the Center Forward shines. Those proper hands and vocals come courtesy of the likes of Ce'Cile, Agent Sasco, I-Octane, G Star with the very clever 'Prosperity', of course a dominant Mad Cobra and others. Big work here which is not to go overlooked. 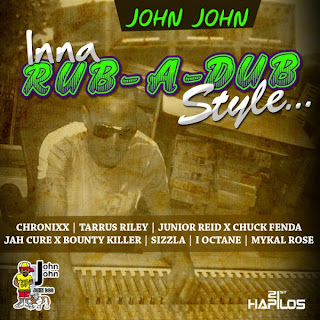 
More big news here as we return the King Jammy camp, this time with the latest from John John, the golden Inna Rub A Dub Style Riddim. Along with an EXCELLENT track on which Earl 'Chinna' Smith also lends a hand, the Inna Rub A Dub Style features a TRULY ridiculous lineup of vocalists. Appearing here are I-Octane, Tarrus Riley, Mykal Rose, Chronixx, Chuck Fenda alongside Junior Reid, a LETHAL combination of Jah Cure & BOUNTY KILLER and Sizzla Kalonji. You can't go wrong with something like that and you won't. MAD! 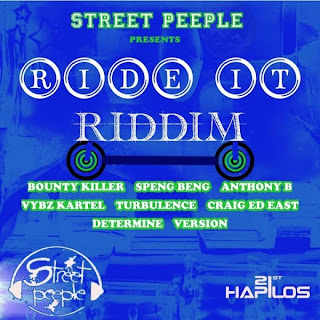 The Ride It Riddim [Street Peeple]


I'm not at all terribly fond of most of the songs on the Ride It Riddim from Street Peeple, but I DO really enjoy the track itself and, at least on paper, with names such as Vybz Kartel, Bounty Killer (big tune), Turbulence, Determine, Anthony B and others, it is an attractive piece and it may be even better than my early ear is thinking. 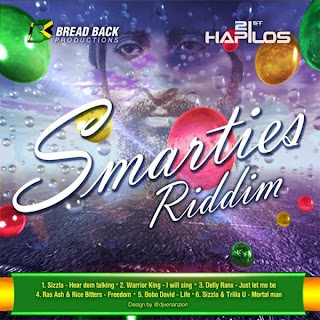 
Breadback Productions continues to pour open its back catalog on the digital form and their latest forthcoming (how can you be the "latest" and "forthcoming"???) (I keep telling you people I'm not that smart!) set comes from almost a decade ago in the somewhat sentimental Smarties Riddim. Sizzla Kalonji dominates here with two songs, one of which, 'Mortal Man' alongside Thriller U was probably the Smarties' most well known piece. But you also have tunes from Warrior King, Delly Ranx, Morgan Heritage and Norris Man. 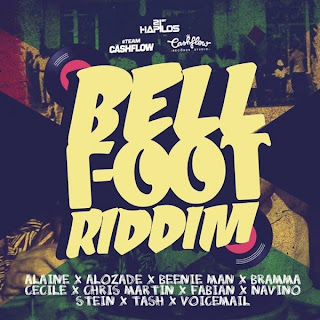 
The ALWAYS active Cashflow Records is back with their new riddim as well, the very colourful and nice Bell Foot. This kind of mid-tempo composition is so interesting because, in its normal form, it does so many different things. Somewhere in there is an ANGRY old school Dancehall track, but with everything Cashflow places on top it, it becomes Lover's Rock, it becomes Groovy Soca-ish, Pop, R&B, anything you need really. And benefiting from its versatility is a female headed cache of vocalists which includes Christopher Martin, Beenie Man, world's angriest man, Stein and Bramma. But, as I said, here the ladies lead and it's Ce'Cile and Alaine taking the top honours on the Bell Foot Riddim with 'Hold It In Deh' and the very clever 'Why Yuh Say Suh', respectively. 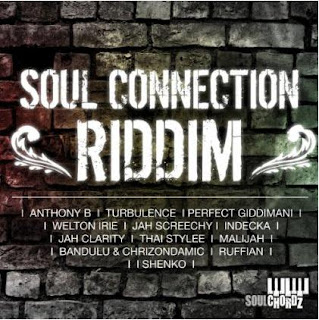 
And despite the fact that that I may have had this post good and finished [I DID], Bredz continues to find stuff to go into it, so here is another. Check out the Soul Connection Riddim from Soul Chordz Productions. With names such as Anthony B, Turbulence, Malijah, Welton Irie and Perfect Giddimani, it's clear that this track belongs here and then there's the riddim itself. BOOM! The Soul Chordz is damn impressive and I really like how you get two instrumentals of the track - one of the original and one with the melodica over it (which may have a shot at being THE best song on this riddim actually). This should be excellent. Pick it up when it reaches. 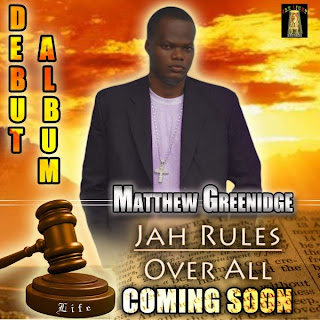 "Jah Rule Over All" by Matthew Greenidge [JahLight Records]


And finally is something which is still in the works, but I thought that we'd put it in your head just early now. JahLight Records' future star, Matthew Greenidge, is soon set to bring forth his debut album, "Jah Rule Over All". As I said, it is still in the early stages, so while I don't know much about it, what I do know is that Greenidge and JahLight are exercising a great deal of common sense because reportedly the album also features the otherworldly gifted Queen Omega. I have a REALLY good feeling about this one and of Matthew Greenidge (who apparently shares a born-on day with me) being the next big Reggae star from out of Trinidad.

Also: New Lutan Fyah album from Grillaras Productions
Posted by Achis at 12:13 AM