'Signs of Growth': A review of "Second Souffle" by Saïk 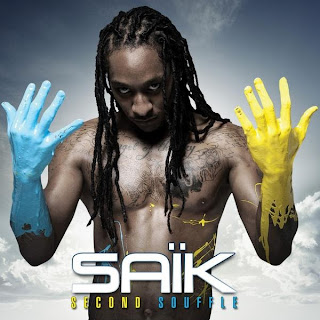 Previously, just about everything Saïk's name came attached to was done via the wonderful Don's Music and G-Zup Concept, the latter of which, I believe, may be his manager -- including the work on this album -- so I was relatively surprised to not see either officially doing the work here and, instead, "Second Souffle" comes via the same Aztec Musique who also did the new album from the aforementioned Daly ("Le Dalycious", in stores now). That was only the first surprise here. The second was the fact that the new album comes armed with a ridiculous and interlude-less TWENTY-THREE tracks and tops out at nearly EIGHTY MINUTES in length - which they clearly did because they know we mention every song and they just wanted to make it hard! Nevertheless, he does manage to keep the listener's attention throughout. The album begins with a selection which really just surprised me altogether the first time I heard it (and it was one released just ahead of the album). 'Surviv' is the type of song which you would have never heard from Saïk prior to the constructing of this album, nor would have expected it from the same person who turned in the material on "Face A La Réalité" and while it wasn't what I was anticipating, it does manage to impress on some level and I think that has something to do with even a song like this not being able to mask Saïk's most explosive of talents. Next is something which is also on a softer side but has a bit of a 'zip' to it (biggup my Wife), the also previously released 'Lan'nwit kon la jouné'. The beginning of this had me fully nervous when I first heart it, but by the time that things pick up, we do get a nice and colourful offering with a stellar chorus and, again, you can hear just the slightest of glimpses of what I actually was looking forward to on "Second Souffle". Things pick up even further on 'Laissé Yo Palé' and that brilliant piece of riddim behind that song. On the first (it just took me like three attempts to spell 'first' correctly) (make it four) album, a song like this would have been slower, but here, at least in the earliest stages, it's a nice expansion on the vibes of the album and a SWEET precursor to the madness which follows. That "madness" is the first sight of unqualified aggression on the album, 'What's Up'. One of the official singles from "Second Souffle" and its first of a quintet of combinations, 'Gimme Di Wine' is in next. This is, as you imagine, a party type of song and a decent one which links Saïk with Riddla and longtime associate and fellow Genesiz alum, Young Chang MC. This one doesn't rank amongst the album's best in my opinion, but it should serve its purpose with ease.

And then there's the boom! There're three songs on this album which, in my opinion, distinguish themselves from the other twenty (which just sounds odd in even typing) and the very first is the one which I think is the oldest here, the now more than two years old, but entirely MASSIVE unity tune, 'You & Me'. This was a song which released in the first half of 2011 and did a big damage. I would have imagined that the second half of that year would have brought what the early second of 2013 has ultimately, but through that time, it's only grew in stature. Though it, too, would not have been the type of song I would have expected from Saïk just a few years ago, 'You & Me' was absolutely brilliant and it's never been better than it is right now. BOOM! Charged with following that large tune is another captivating composition in 'Partir là-bas'. This song took me a minute to work with, but I would say that it is a good example of the 'mood' of much of the material on "Second Souffle". It kind of registers in the middle, in terms of sound, but it gives up bits and pieces of both a more softer and more fiery type of style. Despite its riddim, you can also say the same thing about the sensitive 'Mamamia' as well, which kind of got me a little excited as well. It's also something that I'm still working on, however. SWEET singing Frenchie (biggup Frenchie), Kenza Farah joins Saïk on the LOVELY 'Je mène ma vie'. These two make for a tune which I wouldn't at all be surprised to see actualize into a future single from this album. That thing figures to be exceptionally 'radio-friendly' and it's also kind of Zouk-ish, which may give it an even further reach. And that song also comes just ahead of another combination, 'Like a Winner', which features Hip-Hopper, Sadek. This dually upful and morose vibe kind of reminds you of something that you'd hear from Konshens (biggup Konshens) and although I wouldn't call this a favourite of mine, it does have something to it which is difficult to ignore and that's coming from someone who is no fan of Hip-Hop. And I'll also mention in rounding out the first half of "Second Souffle" (not really), the intense 'Handzup', which is a good song and an inspirational one (and a rather clever one), but more importantly it sets the stage for a later effort here which is the finest thing I hear on this album (more on that in a second).

Speaking of clever, check the very focused 'Info ou Intox', which definitely is something along the lines of what I was anticipating from Saïk here. It is a very impressive lyrical display and has an arrangement which makes for a dazzling moment. 'All Night' has a nice vibes to it as well, but it leads us into something really nice as Saïk hits with an excellent lovers piece (which I haven't heard in a while), previous well-received single, 'J't'emmène'. This song came with a video (biggup Bredz if it's in here somewhere) with a VERY beautiful co-star to Saïk, which probably made it even more of  a standout in my eyes, but it has star-quality which was, presumably, why it was pushed so hard last year and why it did so well also. While I call three of the songs on this album superior to the rest (and 'You & Me' was the first of them), were I to expand on that at all, it would surely be in the direction of 'Fly Away'. The song which isn't the greatest exhibition of it on "Second Souffle" (we'll get there shortly), comes with all kinds of an edge, but it does it in a package which supports a chorus which you'll need much luck in ridding your head of after you hear it… which isn't really a problem though. Saïk later espouses on the virtues of the world's greatest body part on 'Poum Poum Poum' before reaching the pinnacle of this serving.

The MAMMOTH 'S.A.Ï.K' is not only the single best song I hear on this album, but it also comes just before the second best and two songs which're the biggest combinations on the whole of "Second Souffle". As for this tune, it is precisely what I was looking forward to and is a continuation of the style which made me a fan of Saïk's. It is next level wordplay from one of the greatest to do it. And then there's 'Karibean Island'… TEARS! This thing is beautiful. Shockingly the composition links Saïk with walking divinity, Trinidad's incomparable Destra Garcia and together the two revel within the beauty and the PRIDE of the world's most wonderful place. Also, I like how the vibes of the song exist somewhere between Soca and Dancehall with just a enough of both so that both Destra and Saïk seem, appropriately right at home. Also, just how fantastic is it that I've been waiting on this album for so long and they do something like get DESTRA to voice a tune. Well done! Unsurprisingly, the aforementioned Admiral T also makes an appearance on "Second Souffle" on the very popular 'Dancehall Evolution'. These two can do virtually anything together musically and they have over the years and it's always a special moment when they link on a single song. This is no exception and it absolutely will not be the final time it happens either.

Rounding out the album is another four songs which may not (do not) have the appeal of the three just prior to them, but all have nice qualities. 'Viv Vi La' is basically a Zouk song and one which I would have LOVED to hear a singer join Saïk on (like Methi'S) (biggup Methi'S, new album, "On Dòt Solèy", in stores now). 'Mic An Mwen' is wild and a highlight, at least for me, from the album, while the poignant 'Unis' slows things down and the closer, the delightful 'Piblik an Mwen' keeps them relatively slow. Of these songs, the last is the biggest for me, with 'Mic An Mwen' also being impressive and placing a nice bow on the record.

My only substantial critique of "Second Souffle" is obvious - it's too long. Eighty minutes is a lot of album for any style and I'm also wondering how, if at all, it might change once it reaches a physical release (it doesn't, the CD has all twenty-three tracks). I think that, even with a lot to say and to accomplish, somewhere in the area of sixteen or even eighteen songs would have been better.
Overall, however, I'm still a fan and I'm very impressed at the latest occurrence in Saïk's progress. What I really enjoy is how he continues to show that while these songs aren't what we're accustomed to hearing from him in the consistent sense, what we ARE used to is still in there. When he feels like it, Saïk is still capable of lyrically destroying any track he reaches and while I would have enjoyed to get a few more of those moments baked into this "Second Souffle", I am ultimately pleased with the final meal. And just as I mentioned earlier (that seems like a month ago that I wrote that!), I think that changing things up will eventually prove to be a sagacious decision in reference to his commercial success - and it probably already has. "Second Souffle" proves to be a very interesting successor to one of the better Dancehall albums in recent times and is a powerful statement to the ever evolving talent of someone in Saïk whose eventual skill level may have NO limit.