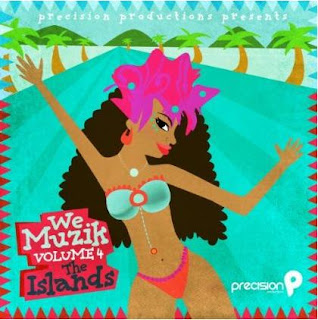 
This is getting ridiculous… If you LOVE, LIKE or are otherwise even remotely interested in Soca music these days, then you simply have to appreciate the work being done by Precision Productions, particularly over the past couple of years or so. Whether you know it or not (and you may not), a whole heap of your favourite songs RIGHT NOW, are their songs and along with pushing amazing vibes, thankfully they also do their own part to keep Soca albums up and do so in the form of, rather easily, producing the genre's finest compilation, "We Muzik". Wonderfully, PP has a formula which sets itself up so that they do two of them a year and the odd numbered releases feature some of the biggest tunes from out of Trinidad, while the even numbered set deals with… everywhere else. And coming in a year where the biggest complaint about the genre's most well known album, "Soca Gold", was that it didn't carry a single tune from outside of Trinidad or Barbados if I recall correctly, you'll find no such concerns here. The fourth installment of "We Muzik" is EXCELLENT, as expected, and features a wide variety of lights such as Tian Winter (thrice), the magical Tizzy with El A Kru (twice), Claudette Peters, former Lucian Road March king and Soca Monarch, DJ HP, Fya Empress,  Jamesy P as well as superstars Rupee, Skinny Fabulous and the incomparable Destra Garcia. This album has such a wonderful vibes to it as well with a healthy mixture of cool and CRAZY and is definitely one of the best installments of this very young series. DAMN! 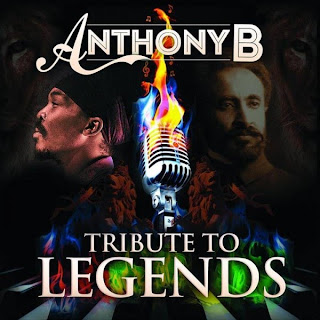 "Tribute To Legends" by Anthony B [Born Fire Music]


Speaking of superstars - Anthony B is back with a new album of his own - one of a very different kind. "Tribute To Legends" is a project which features the chanter making a tribute to… musical legends by covering songs. I'm typically kind of wary of tribute albums and songs because they often either tend to take the original in such a grand deviation that you barely recognize it or they'll be a pure cover, making it virtually useless. However, I will reserve judgment in this case and still give Anthony B a credit for thinking out of the proverbial box. Along with going in the expected direction in covering tunes from the likes of Bob Marley, Peter Tosh and Toots & The Maytals, "Tribute To Legends" also features work from Ray Charles, Elvis Presley and John Lennon. 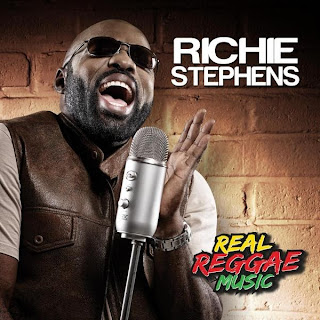 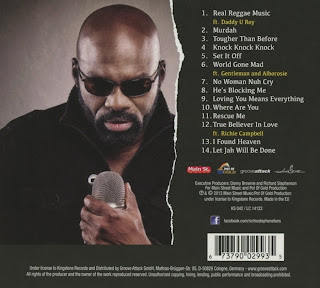 Recent graduate of the prestigious Vaughn Benjamin Academy of Moderation, popular veteran golden voiced crooner Richie Stephens, delivers his third album in about fifteen months or so with the not surprisingly much anticipated "Real Reggae Music". As the name of his label, Pot of Gold, might indicate - Stephens seems to have accrued what might amount to something of Midas Touch when it comes to albums because everything he does seems to get a very healthy push and, obviously, the new album has been no exception. The album features a primary production from the well esteemed Danny Brownie of Main Street and a title track featuring the legendary U Roy, which has already been doing damage. Long time collaborator, Gentleman also guests on a tune alongside Alborosie. I've never been the biggest fan of Stephens', but I do have a VERY GOOD feeling about this one. I might check it out, but you can beat me to it and pick it up today. 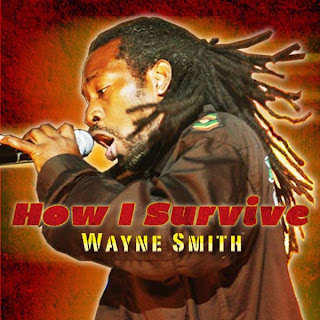 "How I Survive" by Wayne Smith [Sleng Teng]


Another veteran, Wayne Smith, is also back on radars this week with the release of his own brand new album on his own imprint, Sleng Teng (I actually do not know that for certain, but if I were Wayne Smith that would be the name of my label), "How I Survive". I haven't actually been following Smith's career very closely, but I was very happy to see that he was still doing work and apparently he's doing quite well to release a new album. So pick it up and have a listen (an early listen says that 'So High' may be the favourite here). 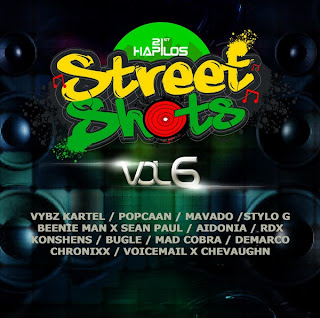 The signature series of the always active and productive 21st Hapilos, "Street Shots" is back with its sixth installment and it… pretty much features exactly what you've come to expect from the series to date. With as much as they do (and have access to), it would be nice to see them come up with a running Roots compilation, but this certainly is not that. "Street Shots" is predominately about hardcore Dancehall music and with the exception of  Chronixx (who has already made it to a point where he simply cannot be ignored), the album features the 'usual suspects'. Mavado, Aidonia, Beenie Man, Kartel, Pop Caan and others appear, but to my opinion it is the DOMINANT Mad Cobra reigning supreme with the excellent 'Di Baddest'. Konshens also chimes in cleverly with his infectious hit 'Walk And Wine'. But you knew all of that already. 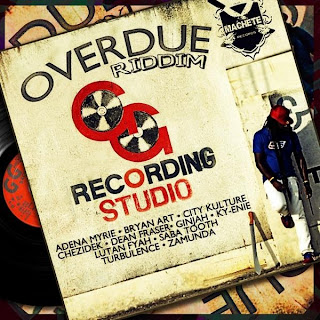 The very dependable Machete Records (which, unfortunately, has absolutely nothing to do with the wonderful Steve Machete) from out of the UK (biggup Steve Machete) is up next and with them, they're bringing the SWEET old school vibed Overdue Riddim. Machete typically makes very good music, so when I saw that they had a new project, I was well interested in hearing it and the Overdue does NOT disappoint. Surely it helps when you have a lineup featuring the likes of Lutan Fyah, Chezidek, Turbulence, Zamunda, Ginjah, Bryan Art (whose cavity-causing 'Dance Haffi Nice' is a highlight here), Adena Myrie and others. Also it couldn't hurt when you turn your track over to the incomparable Dean Fraser, which Machete does as well. Highly recommended and hopefully someone tells Machete Records about Steve Machete! 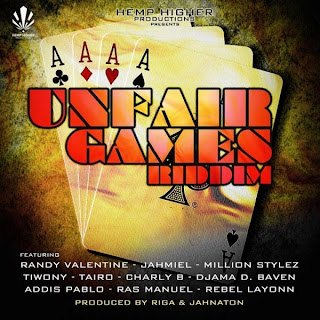 
Riga and company at Hemp Higher Productions are back at work with the blazing Unfair Games Riddim (I don't know… you come up with a name like that for a track, but who cares). Normally, HH opts to go in a more rootical direction with the Unfair Games, which apparently was constructed by Jahnaton (great name). as for the vocalists, Hemp Higher tapes an impressive group which includes Million Stylez, Randy Valentine, Ras Manuel, Tairo alongside Achis Reggae favourite, Tiwony, Jahmiel and others. Still I would tell you to make sure that you check the clean version of the riddim which Bredz actually sent me before he sent the other tunes. It is FANTASTIC! The track itself is a beautiful work of art and several of the tunes here more than do it justice. Very nice. 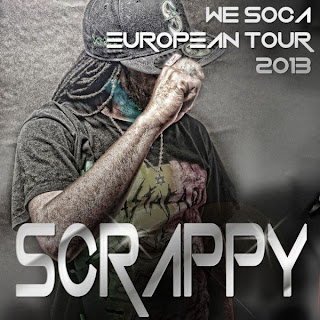 "We Soca" by Scrappy [Faluma]


Nine-trillion time Monster Rat (biggup my Daughter) Soca Monarch, Scrappy (who I think is the reigning Groovy Soca Monarch of Montserrat right now), is back with a new release from the very useful-when-active people at Faluma, "We Soca". I saw this cover and the words 'European Tour 2013' written on the cover and immediately began to think that this might be the unicorn of music - a LIVE Soca album [blasphemy!] - but it isn't. What it is, is what it always is when Scrappy does a set: It's an update from his past year or so of songs. His music is very colourful and easy to listen to and even well recommended to lesser fans of Soca. This time, to my ears, "We Soca" features three definitive highlights (which is pretty good when you only have nine tracks and two of them are the same song), with the title, 'Mash Up' and 'Number One' leading the way (though 'Guilty' is not far behind). Probably one of his better releases and that's saying a lot because he has like two-hundred of them. 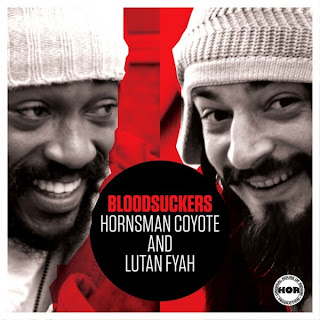 
A few days ago we told you about the forthcoming new album by Perfect Giddimani, "Over The Top", from House Of Riddim from out of Austria and while that album remains about a month away or so, until then you can definitely deal with another big piece from the same label as Lutan Fyah links with the very interesting Hornsman Coyote (off the top of my head, I believe he is from Slovenia - let's see if I'm right…) (I was WRONG. Am I ever not wrong??? He's from Serbia) on 'Bloodsuckers'. Coyote is someone who seems very fascinating and delightful to me and though I don't quite know what to think of him yet, this is a big tune and, of course, Lutan Fyah's is a talent for which I have NO question. 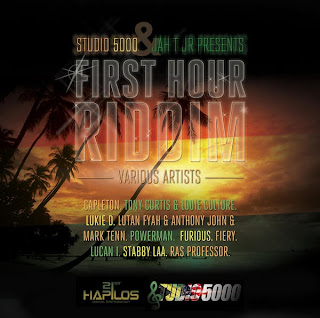 
And finally, in stores this week (as it has been every week for the past four months or so) is the First Hour Riddim. We recently received a very passionate message from a very passionate person who wanted the proper credit for his work, and I never have problem giving people credit for what they do, and admitting I was wrong, and I obviously was again (and I can GUARANTEE you I will be wrong again at some point and probably before the end of this post). This is the First Hour Riddim from STUDIO 5000, as the cover says (which is very nice by the way). Of course, You and I - fans - don't particularly care who made it, just as long as they make something else on the same level of quality. The First Hour Riddim was sublime and it carried some excellent tunes from Capleton, Ras Professor, Lutan Fyah and the likes. But you already knew all of this stuff because you bought it back in April /May when we told you about it.

Digital
Posted by Achis at 1:00 AM