After elabourating on it concerning Perfect Giddimani in our look at his brand new album , "Over The Top" for House Of Riddim, I've also been applying it to others: This notion of exactly how well or poorly history is likely to remember certain people. In Perfect's case it was a matter of his music and, more importantly, his style being overlooked or placed in the frame of so many others despite his many prevailing differences and in the case of Lutan Fyah, it is a similar one.

People such as Sizzla Kalonji, Buju Banton and Vaughn Benjamin are already celebrated for it and we are already at a point where we can divide up the career of Vybz Kartel and see the first half of it in this way as well: They are/were fantastic lyricists and, at their respective bests are in a category all of their own. If you read our work to any degree, you know that I consider Lutan Fyah to be at this level as well and have four years -- he once enjoyed a stretch of a very productive couple of years or so during which, despite the fact that I paid as much attention to his output that as I did anyone else at the time, I did not hear a substandard verse from Lutan Fyah, regardless of the track -- and he has been on a similar tear recently.

"All people shall come to meet and greet -
And to look upon the face of The King From The East
Gifts and praises unto Thee
The Light of The World and The Prince of Peace
Story of my life increase
Say love who you got so close at least
Take this message to Rome and Greece [!]:
LET RIGHTEOUSNESS INCREASE!

The issue in his instance is an even deeper one than it is for Perfect. If you listen to about ten Perfect songs, it should be crystal clear that you aren't dealing with someone who falls into any line besides the one he drew for himself, but for Lutan Fyah, there is nothing as ostensible which separates him and his music. He is not, has never been and will never be the most dynamic and/or melodic of artists, but when you dig just a little deeper, you see the way in which this man absolutely dissects the spoken word and his style is one which is very straight forward and resounding but, again, he doesn't seem to get the credit for it, consistently, right now, so maybe history will be sure to remember Lutan Fyah as, at least, one of the greatest writers of his era and, at best (and "at correctly"), one of the greatest of all time.

"So when you think 'that's all', 'it's over' and you can't take the pain no more -
Call upon Jah
You gotta know, that He'll be there for sure
Even when time gets hard and so rough
You better put The Most High none before
Call upon Jah
Say Rasta never bow
Remember there's no easy way to go

Perhaps it is similar to the situation as I believe it to be with the great Ras Batch. Batch is also someone who makes a very straight-forward brand of music, but he does it in a way in which, as I’ve personally experienced, seems to almost always have a time-delayed approach and I'm convinced that long after his own recording days have concluded that Batch will be celebrated as an artist much, much more than he was during his prime years. Of course should that happen, it would answer my question, but I don't see it as being so. The differences between the two, as writers, is that Batch will introduce concepts with more complexities than will Lutan Fyah, who almost seems to go out of his way to streamline his ideas at times, but both definitely exhibit a great amount of passion for the actual skill of writing lyrics.

"How di guns get so prevalent?
Inna di ghetto our life was so diligent
Mi no si di sense - fi a man ah kill him brother over dividends
DEM GREATEST FEAR IS GHETTO YOUTHS WITH INTELLIGENCE
I wanna know who is di supplier
Cause fi dem I got this burning fire
Dem yah youth can't afford a good lawyer
Every year dem fast without prayer"
-'Streetside Ghetto'

Whatever the actual set of circumstances  - it will be extremely interesting to see how history treats the legacy of Lutan Fyah. However, fans of today like ME and YOU are not ready to turn him over just yet as he continues to be simply one of the most impressive wordsmiths Reggae music has ever seen. 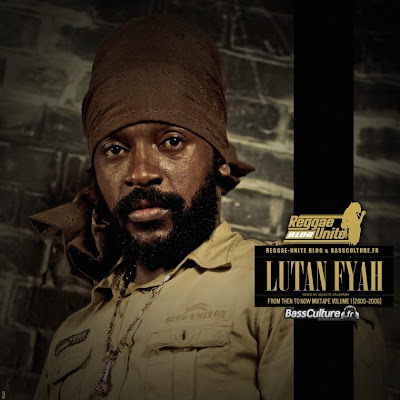 Also, be sure to check out a new mixtape from Lutan Fyah, "From Then To Now" (which is apparently the first of a wicked and all-encompassing series of releases charting the entire career of the chanter) courtesy of our old friend Zalemmm from Bass Culture and the Reggae-Unite Blog. BOOM!
Posted by Achis at 11:03 PM