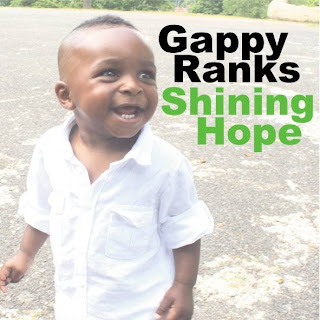 
In less than a week's time now UK light, Gappy Ranks, is set to return with his third full EP to date, the hotly anticipated "Shining Hope" for his own Hot Coffee imprint as well as VP Records. We mentioned this one not too long ago but I have had a fuller listen to it now (and it appears they've settled on a different cover) and I'm very impressed. I'm definitely not surprised but definitely impressed and I have a very good feeling about his brand new album which is set to reach stores next week. 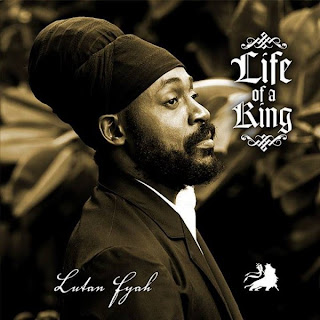 "Life of A King" by Lutan Fyah [Grillaras Productions]


Speaking of having a good feeling, I'm also not feeling too bad the week after "Shining Hope" drops as the always reliable Lutan Fyah returns with his second set of 2013 (one year with two Lutan Fyah albums - WONDERFUL), "Life of A King", for Grillaras Productions. The album's title track and first single has already been doing a major amount of damage and deservedly so, it may just be one of the better tunes that I've heard this year thus far. Should the rest of the album follow in kind (with thirteen tracks in full), we may be looking at something special here and just listening through the clips and, again, I’m impressed. Though I thought the album might feature a combination between Beenie Man and the Fyah, in 'The Doctor's' stead is an expected Chronixx who joins on the mighty 'Cyaan Do We Nothing', as well as OJ and Dancehall veteran Lexxus. 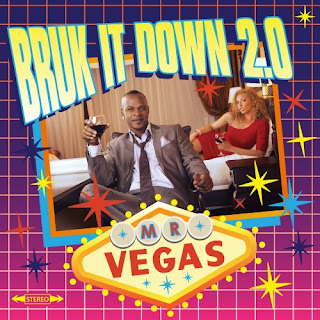 
Another veteran of the Dancehall, Mr. Vegas, certainly earned the right to do absolutely nothing for the next year or two in terms of albums following 2012's land marking double release, "Sweet Jamaica" - but apparently no one bothered to tell that to Vegas as he is already back with a brand new album in "Bruk It Down 2.0" for, once again, his own MV Music label. Obviously the album is so named after his giant hit of the same name which appears here with Soca legend, Alison Hinds on board. The album is very uptempo and fast and I really don't have a problem with that. When you do what Vegas did last year, you deserve a victory lap or two and if he wanted to put out an Opera album for 2013, you wouldn't have heard a complaint from me. "Bruk It Down 2.0" should be better than THAT (and thankfully he didn't do that) (biggup Buccaneer) and a fun mix of Dancehall, Soca and Reggae music. Flourgon also appears as do Lukie D and others. 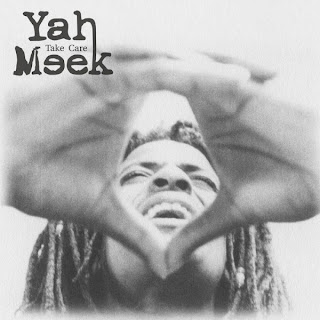 
It doesn't seem as if it has been too long from last we heard from well-respected vocalist, Yah Meek, but just in case it has (and if you, like me, are entirely too lazy to look it up, though I'm pretty sure he had an album last year), the vocalist is back to take care of that with a brand new eight track EP, "Take Care". I've never been the biggest fan of Meek's, but he is one of those artists that has a much bigger and more passionate fan base than he's typically given credit for, so I imagine a piece like this is going to have quite a few people excited. As for this particular piece, I do believe I recall hearing the title track, which features Lea, but just listening through the clips another song or two, especially 'Come Together' sound promising. Check it out when you can and pick up "Take Care" by Yah Meek when it reaches. 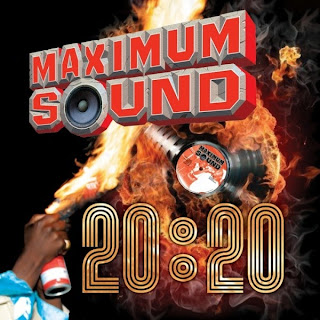 
A REALLY cool idea up next from Frenchie and the wonderful people at Maximum Sound as they deal with a release celebrating twenty years in the business, the very cleverly titled "Maximum Sound 20:20". Not only is the number of a significance of the amount of time, but there're two pairs of twenty tracks on this release as it tops out with a complete FORTY tunes. Listening through it here there're so many familiar pieces and familiar riddims that I haven't heard in more than a minute and it's definitely a bit of nostalgia at times. The artists present are everyone you'd expect, including label favourites such as Jah Mason, Lukie D and of course Anthony B. But also names such as Tarrus Riley, Bounty Killer, Capleton, Sean Paul, Jah Cure, Junior Kelly, Sizzla Kalonji, General Degree, Konshens, Richie Spice, Ce'Cile, Christopher Martin, Agent Sasco, Romain Virgo, I-Octane… pretty much everyone you can think of and then a few more. An excellent compilation and if you haven't been paying attention to Maximum Sound for the past two decades, here is fine, fine way to become acquainted. 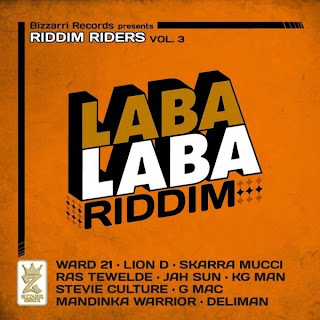 
The fine people at Bizzarri Records are back at work on their running Riddim Riders series and here they have the third installment, the Laba Laba Riddim (following the You Don't Care and Impossible, respectively). The title track here, via Bizzarri's star, Lion D, is familiar to my ears and was definitely enough to pique my interests, but on board this very fun and somewhat old-school-ish track are the formidable likes of Skarra Mucci (which is perfect for him), Stevie Culture, Deliman (sans Sara Lugo), Ras Tewelde, Ward 21  and others. As usual, the Laba Laba is a very interesting release from a label who is about as dependable as anyone these days. 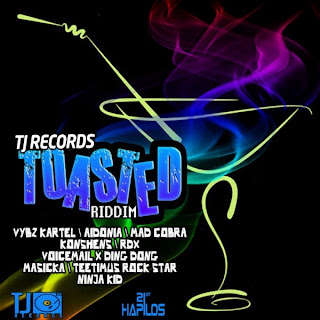 
Speaking of fun and old school, check the latest composition from TJ Records, the Toasted Riddim. The tracks over are another story, HOWEVER, as for the riddim itself, I LOVE it. It is a simple piece of authentic Dancehall which really just caught my attention and hasn't drifted yet. As for the songs, in a somewhat predictable turn, most of the big names here, Aidonia, Mad Cobra, Konshens, Kartel and others take an x-rated route and the instrumental here seemingly has just a bit too much talking but, again, that track is golden. 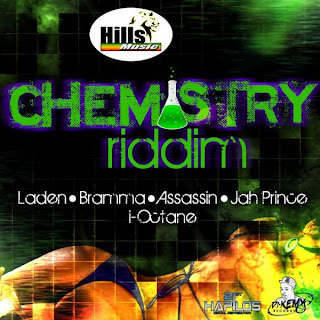 
At least the second Chemistry Riddim that I've heard, but check out this infectious track courtesy of Hills Music. I'm pretty sure that Jah Prince is a signed named to Hills, because they've done most of everything that I've heard from him and, unsurprisingly, he voices the Chemistry twice and does so in the presence of some really big names such as Laden, Bramma and Agent Sasco and I-Octane, both of whom share top honours here in my opinion with the very clever 'More Gal' and the hard to 'shake' 'When You Shake Up Your Body'. 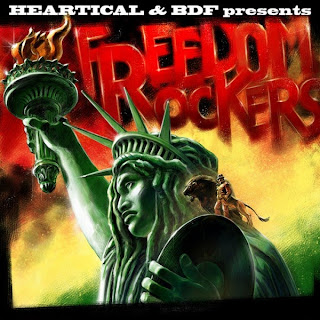 
Heartical and Basque Dub Foundation [BDF] team up for their latest set, "Freedom Rockers". Anytime you see either of those two names attached to anything, you essentially know what you're dealing with immediately. They both do material aimed at more vintage level Roots fans and this is certainly not the exception in either case. With names such as David Hinds, Joseph Cotton, Papa Kojak, Carlton Livingston and General Levy, of course it all works out, but I also have to give credit where it is due because they also do a lot of work with Zareb (check a big, BIG tune from last year called ‘Heart of Mankind') who also appears on "Freedom Rockers". 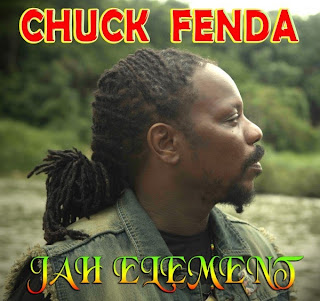 
Veteran Chuck Fenda returns with a brand new album via John John Records, "Jah Element". The album comes as the chanter's fourth studio set and his first from 2009's "Fulfillment". As you might expect, given John John's style, "Jah Element" seems to be a bit of a heavier sound throughout, with a few twists and turns, but longtime fans should also expect to hear that stereotypical 'free' vibe always present in Fenda's music as well. The big point here, on paper, is definitely Fenda's MASSIVE 'Bun Up' from earlier this year, but a few other tunes standout on paper as well. Leroy Smart, Johnny Clarke and Bounty Killer guest. 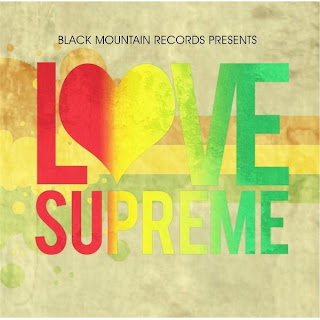 
Black Mountain Records is up next with a VERY nice and interesting release, "Love Supreme". The compilation is apparently built on recent tunes assembled together by and from the label and what really caught my attention was the roster of  talent Black Mountain (which I believe is based in Trinidad) has quietly put together. Of particular note for me was Fojo from out of Guyana who appears on no less than FIVE  of the album's eleven tracks and definitely Skarpyon whose presence here just made me smile. Also appearing are Ajala and Al Trotman and others. 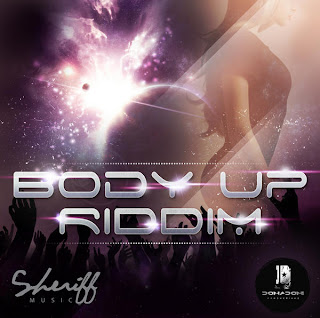 The Body Up Riddim [Precision Productions]


The amazing Precision Productions continues its virtual inability to remain quiet and stagnant on the digital side as they now bring to official release a track from 2012 via Donadoni Productions, the electric and pulsing Body Up Riddim. The divine Destra Garcia, Blaxx alongside Umi Marcano and Erphaan Alves take care of the vocals on the track (instrumental also included) which, once again, kind of blurs the lines between Soca music and a more Techno style, but it works well in this case. 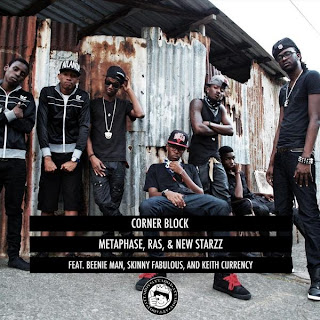 
And finally - I have no idea what is going on with this one, but it does feature Beenie Man and Skinny Fabulous on the same track (and Skinny is even on the cover), which is more than enough to get my attention, so I thought we should say something about it and there it is.

Digital
Posted by Achis at 9:26 PM