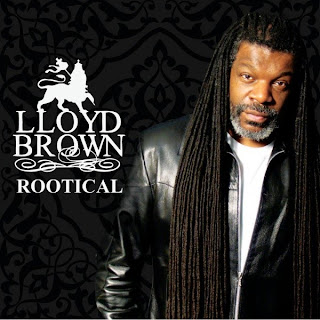 
Joining an already impressive lineup of names with albums forthcoming in the very near future, which includes the likes of Gappy Ranks, Lutan Fyah and Gyptian is sweet singing UK veteran, Mr. Lloyd Brown who returns with his very first album in… about eight months, "Rootical" which comes via Zion High Productions and the Zion I Kings. Having a very big year of their own, the label has already packaged projects in 2013 for Cornel Campbell and General Jah Mikey and Brown's name is a very fitting one to add to the group, of course. As for Brown, the new album is set to follow "New Veteran" from just February, as well as 2012's fine "30". Interestingly, both of those projects were digital-only releases (and, at least check, "New Veteran" was not only digital-only, but iTunes-only as well) and very much eluded the typical type of attention paid to an album from the well respected vocalist, which was really unfortunate given the circumstances, particularly given that one of the two (I bet you can't guess which one!) marked his thirtieth anniversary in the music business. So "Rootical" not only figures to offer up significant musical moments, but also place Lloyd Brown back in the proper spotlight that his career has shown that he deserves.
As for the music, aside from the ultra-appealing obvious -- the Zion I Kings linking with Lloyd Brown for a full album [BOOM!] -- they've also supplied him with a huge amount of vocal talent to work with as well. Like who? Appearing on separate tracks on "Rootical" are Pressure Busspipe, Jahdan Blakkamoore and my personal choice as the most talented female currently making Reggae music in the world, Trini Roots Empress, Queen Omega who joins in on the stirring 'Together'. Yisrael Immanuel also makes an appearance on 'How Could I' and the album also figures to offer quite a few big solo moments from Brown.

Of particular early interest is definitely the potentially giant and very clever 'Not From Me' ["Badmind you want? You can get if you want. And if a hatred you want - if you want it you can get it. And if a grudgeful you want, you can get it but not from me"] and certainly the lively album-opening 'Live In Love'. Lloyd Brown has shown himself, especially in the latest stage of his career, to be someone very reliable to turn out excellent music in general and that is chiefly the case when it comes to albums (I think the last album he had that I did not like was "Brownie Points"). When you blend that with the excellent track-record of Zion High Productions and the Zion I Kings, expectations have to be high for the quality of this one and I'm well expecting something very big.

Check the results for yourself when Lloyd Brown's new album, "Rootical", reaches stores on October 1.
Posted by Achis at 9:30 PM