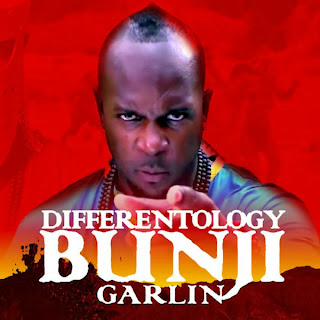 So, a month or two ago, VP Records exercised a bit of common sense and signed up Bunji Garlin, enlisting themselves as the releaser of his next --and presumably most high profile to date-- album (which would be his third with the label and maybe tenth or eleventh overall). With it, they inherited the ability to continue to push arguably the most successful single to date from 'The Viking', 'Differentology'. The song, which also recently appeared on the latest edition of VP's "Soca Gold" series, now reaches via digital single which is accompanied by a remix from the always popular Major Lazer. If, in some woefully remarkable way, you have missed out on this tune, then now would be definitely the time to catch on to what is one of the most infectious songs I've ever heard. Heading forward, hopefully we'll see the latest album from Garlin before the end of the year and I know at least one more (or twelve, whichever) song which would look exceptional on its tracklist. 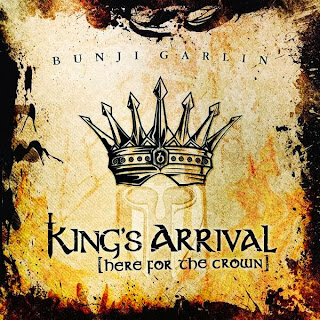 
That "song which would look exceptional on its tracklist" is the recently released and MAMMOTH 'King's Arrival' courtesy of J-Vibe Productions. This song is probably on its way to becoming my favourite for the moment (and I change favourite songs weekly). It is candy for your ears. Reward them (and clean them) and check it out today. 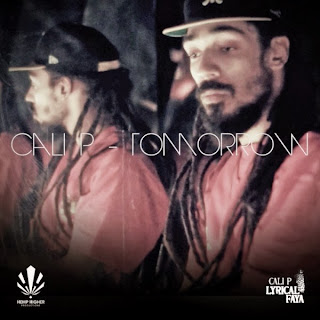 
We got a link from Achis Reggae favourite, the unstoppable Cali P, who suggested we  take a listen to his brand new tune, 'Tomorrow'. As usual, the single finds the chanter linking with Riga and co. at Hemp Higher Productions and, having spent a day now listening to it, it may be some his better work and if you know about Cali's work, you know that is a very heavy statement. The song is somewhat of a deviation from the typical sound of HH as it is definitely more laid back and serene as Cali P jumps in with a GOLDEN piece of inspiration on the song. The digital single release also includes a clean version of the track, the Rockin Bass Riddim, from Riga and Jahnaton. As usual, more flames from 'The Lyrical Faya' who figures to wrap up 2013 in a fine way on his way to a monstrous 2014. Don't miss it.

"Never lose your faith because you're disappointed by people
Keep striving, dash weh di frown
Love yourself and keep wearing your crown
Be unique and you will see
There ain't no other" 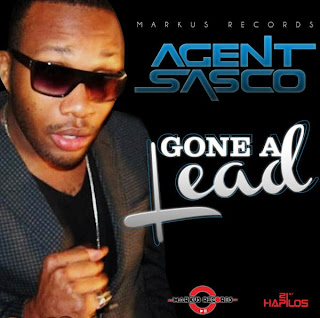 
The progeny of the legendary Buju Banton, Markus Myrie of Markus Records, continues to stake his claim as one of the finest Dancehall maestros in the world and on one of his most recent tracks, he teams up with the always blazing Agent Sasco for 'Gone A Lead'. Though we may not mention his name as much as we did last year, Sasco remains on point and, lyrically, nearly without peer in the Dancehall in my opinion. This song is fairly what you would expect: A sterling tune over a highly infectious riddim. 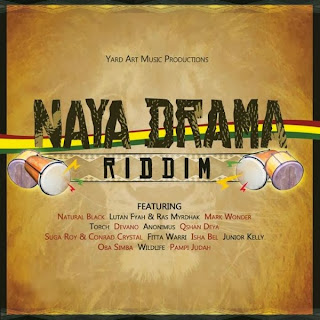 
Yard Art Music steps in next with a gorgeous drum heavy [DUH!] composition, the Naya Drama Riddim, which features a roster of artists which is nearly as impressive as the track itself. I can't imagine the names here will draw much attention at all from more causal listeners, but my eyes lit when I read through it. First of all, as is always a wonderful occasion, the Naya Drama Riddim features a new song from the incomparable Mark Wonder and he isn't alone. Joining the brilliant singer are also Natural Black, Lutan Fyah & Ras Myrhdak, Fitta Warri, Wildlife, JUNIOR KELLY, the 'volcano trumpet Qshan Deya, Oba Simba, Torch (whose 'Always Alert' is fantastic) and others still! With a lineup like that, your track could have been mediocre and I probably still would have enjoyed it, but the Naya Drama is far ahead of average. See for yourself when you pick it up today. 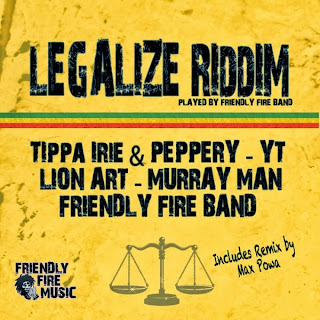 
Check out the Legalize Riddim from the Friendly Fire Band which, in its brevity, is a very HEAVY offering. I hear a few sounds mixed in which sound so comforting to my ears and the result is one impressive piece. To handle the vocal duties, the FFB turns things over to the likes of Tippa Irie w/Peppery, YT, Lion Art and even Murray Man (who always impresses but never seems to record music very often). Unsurprisingly, the release also features a couple of dubs, including one very nice from Max Powa, and an always nice clean version of the track (which would have been nice on the Naya Drama as well). So check it out and biggup the Friendly Fire Band. 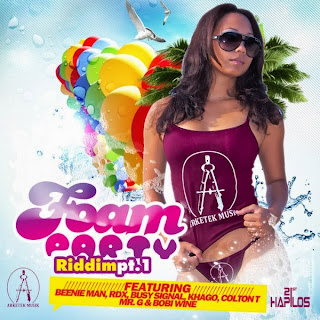 
Dancehall stars, Beenie Man and Busy Signal, lead a very colourful lot of vocal talents on the equally vibrant Foam Party Riddim from Arketek Music. I could describe this one to you… but you already know what to expect. It's fun Dancehall/Groovy Soca and just something nice to listen to. RDX also appears with 'Party Life’, as does Khago, Mr. G and the inescapable Colton T from out of Dominica. 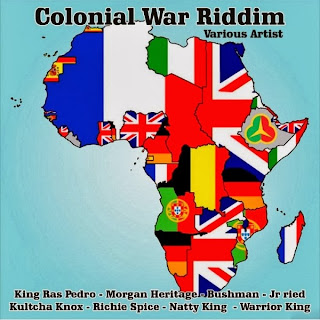 
While the likelihood that they may not release a new album from Midnite for the very first time in several hundred years (although there was the Dub album), becomes more and more of a certainty, Rastar Records is back with a riddim release to show that they are still hard at work and still impressing as well. The Colonial War Riddim (great name) is a HEAVY track which definitely pings of someone who… releases a whole heap of work from Midnite (who, incidentally, is not present on the track). Though Vaughn Benjamin does not voice the track, you shouldn't at all be disappointed because who is here is big! Lutan Fyah provides the Colonial War Riddim with its most identifiable moment, 'Poor Man Privilege', which was one of the standouts from his "African Be Proud" album with Rastar from a few years back. Also here are Norris Man (big tune), Bushman, Richie Spice, Warrior King, Morgan Heritage, Determine, Junior Reid, Ginjah and others. Rastar has been known for one thing largely over the past few years (and with good reason), but this changeup proves that they can occasionally stay up after Midnite. 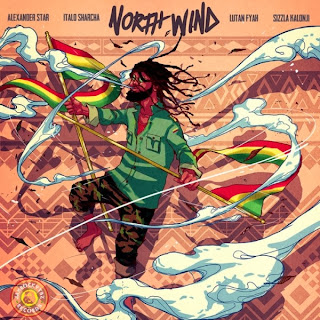 
Jamrock Vybz Records stands up with an excellent riddim EP release for their track, the North Wind Riddim. Though it carries only four actual songs (and an instrumental), what it lacks in duration, it makes up for in substance because there're some really nice selections here. Both Italo Skarcha and Alexander Star do well on their offerings, 'Limitless' and 'Home Cooked Meal', respectively, and the big names here live up to their lofty reputations. Sizzla Kalonji gives us 'Fight Dem Ownself', while Lutan Fyah (as he usually does) soars lyrically with the genius 'Nat Up Yuh Head'. Something also should be said of Jamrock Vybz because the riddim here, and again, they do provide a clean version of it, is STERLING. It may be one of the better riddim's I've heard in 2013...now maybe they can pass it around a bit more. The start is an excellent one. 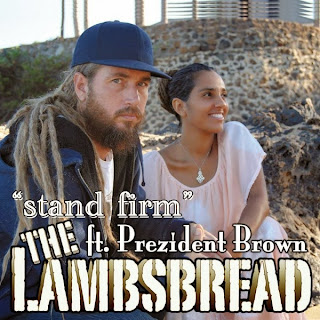 
And lastly this week - I've always said that I should attempt to pay more attention in the way of well esteemed Hawaiian duo, The Lambsbread, and apparently they're about to give me an opportunity to do just that with a forthcoming new album for which the new single has just dropped. 'Stand Firm' is a song which features Prezident Brown and comes via Rumble Rock Recordz (biggup Rumble Rock) and it is a small, but delicious, taste of what hopefully turns out to be a well appetizing venture and one which, I'm expecting to FINALLY be sitting at the table for. Biggup The Lambsbread.

"They want to slave the people with dem new world order
Working everyday to feed the famine up the ladder
Want control and resources, that's what babylon dem after
CONTROL THE WATER AND FOOD, SELL YOU THE POISON AND THE CANCER!"