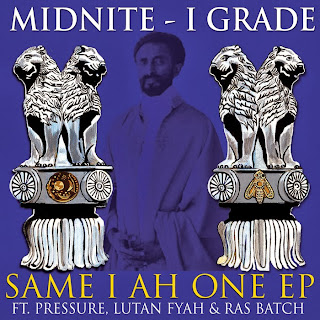 "Same I Ah One" by Midnite [I Grade Records]


So, first up this week is a release that we told you about from just a little while ago, but one which I've now heard quite a bit of - it is the forthcoming pre-album EP release from Midnite via I Grade Records, "Same I Ah One". The release contains three tracks, 'When Jah Arise' and 'Weather the Storm' alongside the title track, and all three tunes feature big names as guests joining Midnite frontman, Vaughn Benjamin as VI stars Pressure Busspipe and Ras Batch feature as does lyrical wizard, Lutan Fyah. Also present are various mixes and a dub of the title track which should be excellent as well. I've actually gotten to hear the title track feature Pressure and, most delightfully, the MAMMOTH 'When Jah Arise' with Lutan Fyah. The eponymous piece is absolutely beautiful and I'm hearing that stereotypically dazzling vibe which stands up so prominently when you link Midnite and IGR. And I had a really good feeling about it after hearing the clips of 'When Jah Arise' which is as powerful of a praising tune that I've hear since Norris Man (more on him in a second) told you about the 'King Of Your Soul' last year.

Hail King Selassie I, The Prince of Peace
Inna tough conditions, I keep my mind at ease
No more wrong or right, all rebellion cease
NO MORE EYE FOR AN EYE, NO MORE BLIND BELIEF
There is a reward for the meek who steadfast inna love -
Let righteousness increase
Just like those said Jah the river flow free
Shout Selassie from the mountain peak

The set is released ahead of what is sure to be a big album early in the new year from Midnite, IGR and the Zion I Kings, "Beauty For Ashes". 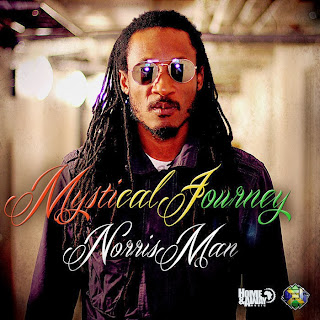 
While I have not heard much more of "Mystical Journey" from veteran chanter Norris Man than the last time I told you about it (though I have heard what I think is the album's first single, 'These Feelings', which is very good), the little bit that we have come across has been fairly impressive. The album does feature the work of Swedish imprint, Nordic Steel as well as work from Norris' own label, Home & Away. The closer we get to it, I'm having a better and better feeling about it and I think it may prove to be one of the artist's best so definitely pick it up and see and hear for yourself when "Mystical Journey" reaches stores next week and you can expect a full review for this one on Wednesday or Thursday. 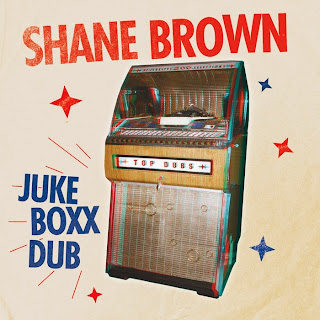 
I'm becoming more and more of a fan of Dub as I get older an older and, because of that, I'm really looking forward to this project courtesy of Shane Brown and co. at Juke Boxx Records which piles together dub versions of twelve of their tracks, some of which are immediately recognizable, such as 'Run Dem Dub' and definitely 'The Statement' and 'Can't Sleep Dub' and others, wonderfully, take a bit more time. Don Corleon did a similar piece a few years back with "Don Corleon Presents Dub In HD", and I'm very happy to see that Brown has followed similarly and he isn't the only one (love the 3D cover too). 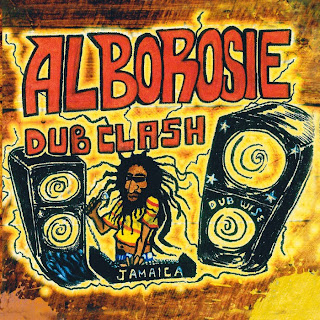 
Also finding his way through with (more) Dub, is Italian star, Alborosie who returns on the same day and on the same label as Juke Boxx with a Dub project of his own, "Dub Clash". I am certainly not the biggest fan of Alborosie's, but I believe he had a limited Dub version of his most recent album release, "Sound The System", from just earlier this year, which I never really got into, but if I'm in the mood (and apparently I will be, because I'm dealing with "Juke Boxx Dub"), I may just check this one out. 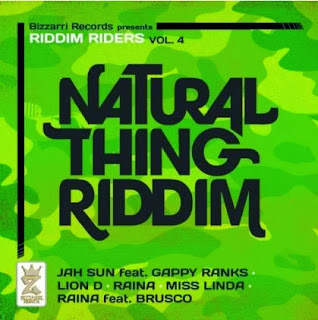 
Also doing big things from out of Italy are our friends at Bizzarri Records who're set to deliver the latest and fourth installment of their solid Riddim Riders series with the Natural Thing Riddim. Bizzarri is simply one of the most reliable labels around today and early indications here are that the track lives up to their lofty standards and does it easily. Also looking good is the roster of vocalists which includes Gappy Ranks, Jah Sun, Raina, of course Lion D, and Miss Linda who I don't think I've heard from in awhile so I'm damn looking forward to hearing her contribution to the Natural Thing 'Buss A Whine'. The official release also includes two instrumentals, a Reggae version and a Dancehall version and, basically, you also get a pair of versions (one on each style) of every song here as well. A very good idea and more expected excellence from Bizzarri Records. 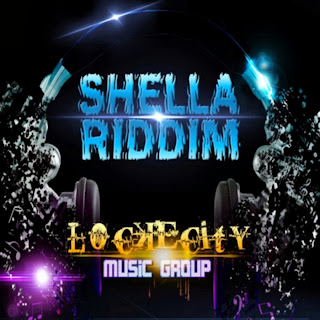 
Grrrr! Biggup Lockecity Music for adding a bit of an edge to this post coming courtesy of their latest creation, the angry Shella Riddim. Unfortunately, though it seems to be headed back, authentic Dancehall remained somewhat of an endangered species in 2013, but that isn’t the case here. The Shella is a high-powered piece of hardcore Dancehall music and the vocalists treat it as such. Featured here are the likes of Beenie Man, Mavado (more than once), Kiprich, Frisco Kid, Blacka Dan and, unsurprisingly, New Kidz, who, between two tracks, shines brightest on the Shella to my opinion. If you're looking for something a little harder, definitely check this one out as not only is the track good, but it promotes a pretty high level of skills as well so don't miss it. 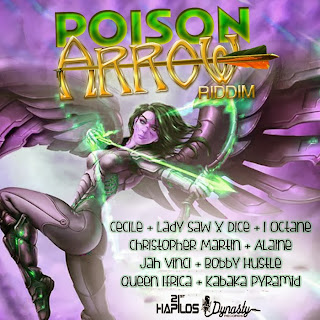 
Lockecity may've gotten up and angry for their latest set, but the damn dependable US based Dynasty Records is taking things a bit easier this month with the lovely Poison Arrow Riddim which is some of the best work you'll find on this post. It also features some of the best assembling of artists as well as voicing the Poison Arrow is an impressive group which includes the likes of I-Octane, Kabaka Pyramid, Christopher Martin and label staple, Bobby Hustle. But the women rule this track with big contributions from Queen Ifrica, Tawyna (whose performance on the clean title track is OUTSTANDING), Lady Saw, Ce'Cile who getting under one to get 'Over One' and Alaine. Alaine's 2013, somewhat quietly, has been golden and it would be so nice if she gifted us a big new album in the new year, because she has been making music about as good as anyone in Reggae this year - she has literally been glowing. Not to be missed. 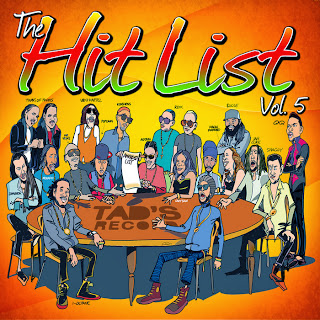 
End of the year means that (a new year is about to start) it is time for the annual installment of "The Hit List" which is one of the several signature sets which come via the always active Tad's Records. As usual the album is packed with music from the previous year, however, with various clean explicit versions of the same song, this year's 'list' is probably too long - topping out at FIFTY-ONE songs over a span of nearly THREE HOURS. There is good material here from some really big names and it is a perfect gift to kind of a casual Reggae fan, in my opinion and even for the most interested who may have missed a song or two. 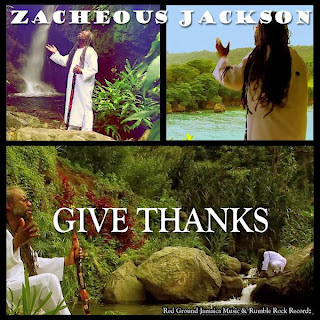 'Give Thanks' by Zacheous Jackson [Red Ground Jamaica Music]


And finally coming soon today is the latest from our old friend, Zacheous Jackson, who 'Gives Thanks' with his big new tune. The tune comes via his own Red Ground Jamaica label and features work of one Jimmy Cui from Rumble Rock Recordz as well (biggup Rumble Rock). The all-inclusive tune is simply about paying respects and saying 'thank you' to The Most High, regardless of by which name you know HIM [or HER]. The song, itself, is really beautiful as well, but I really like the kind of diverse message which makes for a fine and OPEN straightforward Roots piece. 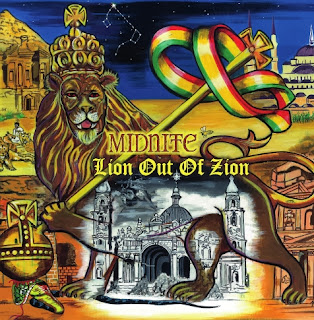 "Lion Out Of Zion" by Midnite [Afrikan Roots Lab]


Quietly releasing last week (biggup Bredz) was an album loooooooooong listed in the 'coming soon' department, it is the latest MIDNITE album, "Lion Out Of Zion". I don't even know when this album came about, originally, but I want to say that it's been 'coming soon' from way back in May or so and it is finally here, wonderfully, prior to the end of the year. It is a NEW, actual Midnite album and I cannot wait to get my paws on it (biggup Bredz again). And you know you can expect a full review next week. 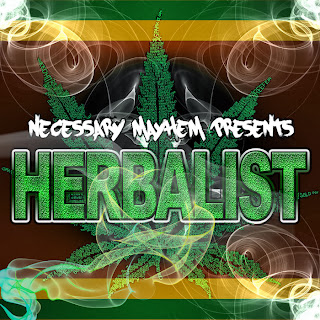 
Not too long ago, the aforementioned Dynasty Records released a compilation by the name of "Spliff Tales" (which certainly should be out by now) and the shining UK imprint, Necessary Mayhem, is doing following suit with their own green compilation, "Herbalist". Curtis Lynch Jr. and company have really scored with and assembled some significant hits on the topic throughout the years and, such a release as this is a very good idea in my opinion with big tunes coming via Cali P, Million Stylez, Joggo, Top Cat, Mr. Williamz and others, but it is Ziggi Recado who scores the biggest with the monstrous 'Joker Smoker'. 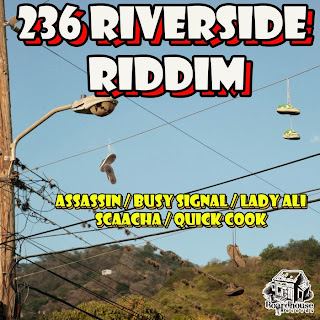 
Biggup Agent Sasco and Boardhouse Records for, surprisingly, delivering their Riverside Riddim to an official release, despite being nearly two  years old now. The piece, I think, originated back in early 2012 and I suppose it is matter of being better late than never. The somewhat 'playful' track certainly wasn't the best, but it did back some powerful tunes from Sasco and Busy Signal, Lady Ali, Scaacha and Quick Cook who joins Sasco on 'River Stone'. If you missed it, definitely take a look now. 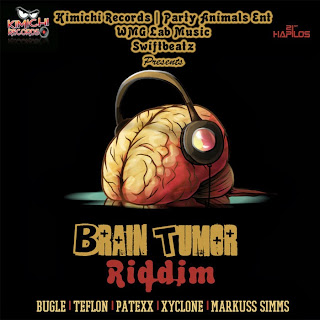 
Lastly, Bugle leads a list of decent names who come together for Kimichi Records' kind of electric Brain Tumor Riddim. His tune here, 'We Nuh Fear' is really what got my attention, it is VERY good and though I'm not crazy about this one, it definitely deserved a mention. Also doing well here is Markuss Simms and Xyclone. Patexxx and Teflon round out the set.