Sara Lugo Hits Me With Music! And Then, We BOOM!

So we can now call it, by far, the greatest two-day stretch of my entire life, so I thought that I'd tell you about it. First of all, it was Friday when we got yet another MASSIVE addition to what has been one of the most amazing years in memory for Reggae albums when the news reached that Achis Reggae and EARTH favourite, all kinds of delightful German Reggae/Jazz hybrid Sara Lugo was set to deliver her sophomore set and the follow-up to 2011's downright glowing "What About Love" , "Hit Me With Music" [BOOM!] [BREAK SOMETHING!] [DESTROY COMMON SENSE!]. Like its older sibling (which you already have and I don't need to tell you about anymore) (but you know that I will), this shot comes via the professional fire-burners at Oneness Records from out of Germany who have virtually locked up and stocked up and away the discussion for 2014 European Label of The Year in the first week of September and, also like the first album, this album should prove to be a most remarkable display of Lugo's truly one of a kind blending and shaping of genres and sounds which are not normally put together the way she does it. It's always so interesting to hear her in her 'element' and how organically and seamlessly she puts things together PERFECTLY. 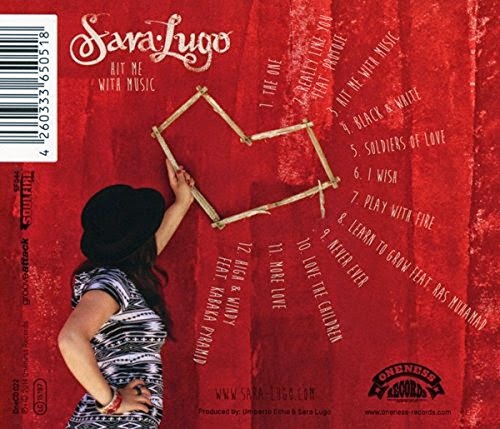 Looking through the track list, it offers quite a few reasons to smile including the three combinations. Unsurprisingly Kabaka Pyramid makes an appearance on 'High & Windy', the duos cut of the ReggaeVille Riddim which may just be Sara Lugo's most recognizable tune to date. Also here is Ras Muhamad whose contributions to "Hit Me With Music" are the same infectious results which lit up his BRIGHT "Salam" album [in stores now] [right now], 'Learn To Grow'. And, finally, I was also very happy to see Protoje's name here as well as he joins on 'Really Like You'. There're so many other songs here which I'm well looking forward to hearing as, particularly, clips of the title track, 'Black & White' and 'Soldiers of Love' sound full-on SPECIAL and I cannot wait to hear them… or the other nine songs on the album (… even though I've heard two of them already) (I want to hear them again!).
And, personally, we've always been enthusiastic for Sara Lugo's work. She's a lovely human being and she has one of the most intoxicating and CLEAR voices that Reggae music has ever seen and I've been looking forward to a "Hit Me With Music"  -- a second Sara Lugo album -- from… even before I heard the first one! Her career and her music is so interesting and compelling and continuing to watch her progression has been one of the most joyful experiences in being a fan of this amazing genre over the course of the past half-decade or so. So biggup Sara Lugo and be sure to join everyone else with a semi-functioning (and even some of us with a COMPLETELY NON FUNCTIONING) brain and pick up her new album, "Hit Me With Music" from Oneness Records, when it arrives in stores digitally and physically on October 17th. Time to get excited.


…Okay and, quickly (because I know she'd hate me mentioning it) (and I'll likely be punished for it) (so be it, won't be the first time) (cannot be the last), most of my attention recently has been focused on what made the double day so magical - my wonderful Wife delivered our second child on Saturday, another completely healthy girl. WHAT! BOOM! I'm a person who has done, literally, TRILLIONS of stupid things in my life (a number which grows by the half-second) but I did one thing right. She is an amazing, AMAZING person [Bredz, stand up!] and my spirit is smiling today!
Posted by Achis at 11:30 PM