"Cause I really, really like you. There's something about you" 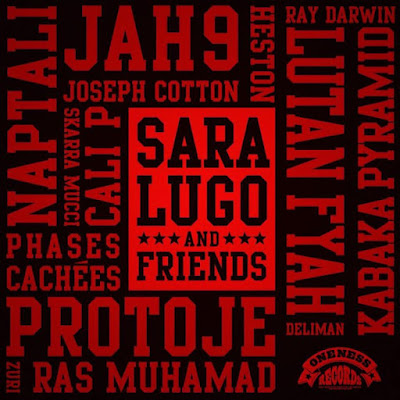 Okay so, I've been fortunate lately to be the recipient of quite a bit of good news (especially medically) (biggup Achis) (and biggup everyone wondering about us: I've been ill for about a year and a half) and it got a little (a lotta) better when the wonderful people at one of our absolute favourite labels Oneness Records from out of Germany once again linked with one of the current bona fide GEMS of Reggae music, the incomparable Sara Lugo for a very cool new projct. Having just teamed up in 2014 for the singer's second full album release, "Hit Me With Music", I seriously wasn't expecting album #3 until... 2017 at the earliest perhaps, but with a pair of stellar releases behind her (and you really need to have picked up both "Hit Me With Music" and its predecessor, "What About Love" of 2011, already) Lugo brings forth a very interesting compilation of combinations, "Sara Lugo and Friends".

We have actually seen things like this previously as another of our and Oneness' favourites, Mark Wonder, released a similarly theme set several years. As the title would suggest, the fourteen tracks appearing on "Sara Lugo and Friends" feature the vocalist alongside a whole heap of different names both from within and outside of Reggae music. And you certainly cannot do such a thing with just anyone but Lugo has shown throughout her career that she can... work with just about anyone at all with any type of style -- a devastatingly gorgeous facet of what can be considered, at least in my opinion, one of the most pleasing musical presentations in the whole of modern Reggae music -- and do so without changing virtually anything that she generally does. We had no idea at the time but we all received a tip that this project was forthcoming when Lugo made a MAJOR link with the mighty Jah 9 for what was the finest tune that I heard in the first quarter of 2016, 'Rejoice' (TEARS!), which, essentially, is the first single from "Sara Lugo and Friends",
The album is a mixture of very prominent and newer/less known material and, as expected, is fantastic throughout. The next song that really caught my attention looking through the tracklist was 'Wine Now' alongside yet another favourite of ours, Cali P (biggup Cali P). This piece was the duos infectious cut of the equally addictive and underrated Scrub-A-Dub Riddim from Inspired and Hemp Higher ["My girl, you know seh mi like you"] and I was SO happy to see it here. There have been several combinations Lugo has done which are not carried on this album (obviously they couldn't include them all) and a tune like that may've seemingly missed the cut, but its presence  well provides "Sara Lugo and Friends" with a dash of colour and edge. The same could be said (and I'm going to say it, watch here -) about a tune which was completely new to my ears and eyes 'Pour Le Plaisir' with French Hip Hop outfit, Phases Cachées. Didn't I say she could work with anyone? Lugo finds common ground with  Phases Cachées despite the captivating tune veering between English and French throughout and it is a tough selection here. Also new to me, I think, is the sublime 'Don't Stay Away' with Jamaican veteran Joseph Cotton on a downright delightful old school vibes. And while I may be familiar with 'Mi Voz' featuring Zuri, the song gets a fresh mix here courtesy of longtime Sara Lugo producer Umberto Echo. 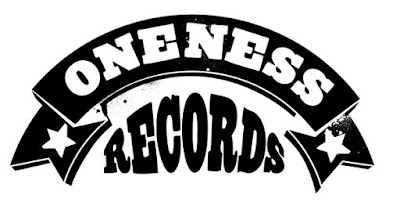 As I mentioned "Sara Lugo and Friends" also ties in quite a few songs which fans are sure to recognize and LOVE immediately. Pieces such as 'High & Windy', 'Really Like You' and 'Learn & Grow' carry a heavy weight with Kabaka Pyramid, Protoje and Ras Muhamad, respectively and might appear on a 'best of' Sara Lugo album right now...

PAUSE
What would I personally put on "The Best of Sara Lugo" album right now if I was compiling it? Great thing to think about - ten songs right off the top of my head, let's do it. In no order in particular and watch me forget one or two:

"Sara Lugo and Friends" also brings together some solid tunes you may not have heard in a minute (YOU, not me, YOU) featuring the likes of Naptali (biggup Naptali), Lutan Fyah, Skarra Mucci ('Dubbin Is A Must', big tune), Ray Darwin, Deliman and Heston and all we can say is WELL DONE! I'm considering it a bonus, and a giant one, because the prospects of potential brand new Sara Lugo album are looking sweet, but a set like this well makes it easier to wait (... actually no it doesn't. It probably makes it harder. Just forget that last sentence). In any case however, what this album does do is to show that, as I said, certain people can just mash up anything. It doesn't matter what someone brings to the table and it doesn't matter who brings it. In what remains a relatively brief time (although she definitely does qualify as a 'young veteran' these days) (and what would that make me? Probably old and crazy) Sara Lugo has shown a style which is so INHERENTLY versatile and OPEN and seemingly was at its nascency that her music, at its strongest, is in one way or another, best shared with others and not to be kept to yourself. Want an example? Pick up "Sara Lugo and Friends" from Oneness Records which is in digital stores right now. Go do it! I'm going back to bed... I already have the album... you have to get it now. You can either get it or you can get it. It's all really quite simple. Even I can comprehend it. So if you can't you must have some SERIOUS problems. Like REALLY big problems. Okay I'm really done this time. 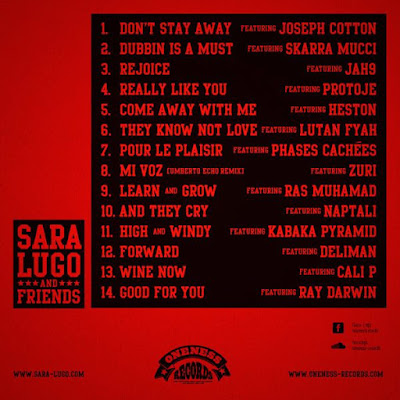