Not to bother you by telling you way too much of my ghoulish business, but as I've alluded to previously, I'm pretty much a bowl of some type of substance these days when it comes to my health and I definitely have to say thank you to all of the messages we've gotten over the past couple of years or so who have made a mention or some type of concern yeah. Even if we don't respond [LAZY!], it's still appreciated.

HOWEVER, someone who is well indirectly doing her part in keeping my spirits moving by continuously dropping amazing works, of course, is Achis Reggae favourite, Sara Lugo, who has dropped two new videos over the past month.

The first was for the tune 'Pour le Plaisir', alongside Phases Cachées, from out of France (which is apparently where Lugo lays her head these days).


I have to mention, hilariously, my Wife's wonderful first reaction when she saw the video for this tune which was something along the likes of, "when did she get THOSE", and I'll leave that to you to figure out what "those" are there. But the video is a very nice one which well matches the vibes of the song and really does what it's supposed to do, at least in my opinion, and makes the song stand out even greater. GREAT music on that tune and give it another listen.

Secondly and most recently (DUH!) is was the somewhat surprising clip of the MASSIVE 'Learn & Grow' which features Indonesian firebreather Ras Muhamad. The tune originally appeared on an album you already own, Muhamad's "Salam" and has lost not a bit of its shine over the course of the past couple of years. It ranks amongst the best either artist has ever produced to my ears.


Besides being another excellent video, I was just REALLY happy to see this tune be backed up with visuals. You go through albums (or at least I do) and think about how nice it would be if one or two of your favourites might get that type of rinsing but it doesn't always happen and, given the age of the song in particular, this was a big surprise (biggup Queen Omega for mining 'Ganja Baby', which is well over a decade old now).

So, if you're down on your luck or you're just not feeling too well, might I suggest adding a bit of Sara Lugo to your daily rotation. I'm  no doctor, but I've told you this for years: This woman makes music which JUST MAKES YOU FEEL GOOD! 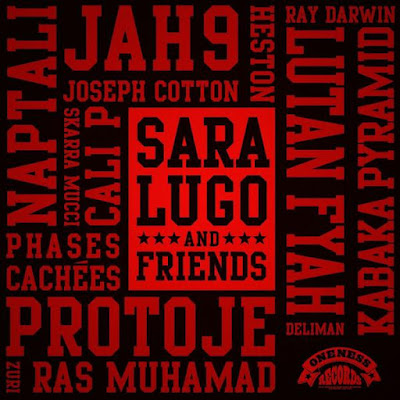 Both 'Pour le Plaisir' and 'Learn & Grow' can be found on Sara Lugo's latest release, the wonderful "Sara Lugo and Friends", which is in stores now... so go and get it.
Posted by Achis at 1:56 PM