'Distinguished Gentleman': A Review of "Teach Them Right" by Apple Gabriel 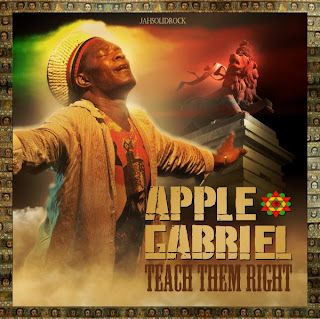 Besides himelf being one of the most distinguished of names we have in Reggae music, the singer also happens to have one of the most recognizable voices in the genre as well. So, despite the fact that I don’t consider myself to be amongst the most frenzied of Israel Vibration fans (and the artist seemingly has yet to have the opportunity to create such a fervent following for himself as a solo artist), I do admit that the very first drop on the album was a sound for sore ears for me. That first sound to be heard on ”Teach Them Right”, Apple Gabriel’s new album courtesy of Jahsolidrock and Not Easy At All Productions is a very nice opener and one of the album’s finest of moments, ‘Mr. Conman'. This tune is, effectively, a sufferer’s anthem, but it is one which aims itself at those who’ve cause the Sufferation in the first place.

“What goes around will come around
Same man you pass on your way up
Same man you pass on your way down”
Gabriel also goes on to make the connection with himself and empathizing with the situation of being impoverished and coming from his far and recent background, you know it’s a tune which strikes the singer on a very personal level. Next in is a tune in ‘No Equality’ which is absolutely STERLING to my ears. Building on some of the same concepts to be found in the opener, the song again speaks to the ‘powers that be’ who have created this oppressive and VIOLENT system which generates so much destabilization and unruly behaviour amongst the masses. I look at this song as one of the strongest lyrical efforts, first of all, on the album, but it just SOUNDS so nice and it isn’t very much of a ‘flaring’ tune, it’s very straight-forward and just goes about doing what it was obviously intended to do. The next tune to be found on ”Teach Them Right” is my absolute favourite track on the entire album, ‘In The Jungle’. I probably spun through this tune about twenty times or so before I realized that I was listening to something pretty special which would go on to provide what is, for me, the lasting sentiment of the album.

One thing that really caught me by a nice surprise on ”Teach Them Right” (and thus doing what the title indicates, I suppose), is the very rich and a very varied nature of the lyrical direction of the album. The very first three selections, despite being similar in terms of where they ultimately go, take very unique steps to get there and the balance of the album covers a wide variety of subjectry. A tune whose words I HOPE gets a great amount of attention is ‘Give Them Love’, which finds Apple Gabriel throwing LOVE to all corners of the world.

“A new days has begun
Another battle to be won
Now the weak must be strong
Don‘t you fight the gays and the lesbians
Don’t you fight the church and the Christians
Give love for love to go to Zion”
I’m not going to go FULLY to the point of opening up that discussion, but for a subject which is and has been more than one in passing in our genre for the pass decade or so, here we have such a respected artist giving his uncategorized and unconditional thought on the subject (and I happen to agree with him by the way) so hopefully those who come constantly seeking the negatives will just as aggressively find the positives and celebrate Gabriel for it (and, incidentally, that tune has the same sublime riddim as Chezidek‘s tune ‘Live & Learn‘). There’s also ‘Gifted Ones’ which finds Gabriel conversing with and giving honours to some of the finest that music, as a whole, has to offer. It is probably the lyrical changeup of the album and it does very well.

The second half of tunes, while maybe lacking the star power of the first, is arguably just as interesting. Speaking of “interesting”, the riddim on the tune ’Hypocrites’ may be my favourite on the album (more on that in a minute) and the tune itself delivers a nice message, somewhat reminiscent of those of the opening batch of selections (the entire song is lovely). I had no good thoughts or high expectations at all going into the song ‘We Are The World’ because I was pretty sure that it was going to be just kind of slopped together clichés and well covered topics, but it wasn’t and the tune turns out to be a very nice surprise by its end. On the other hand, there was no surprise to be found on ‘Praise Jehovah’ - I figured it would do big things and it did! What I like here most is how the song has the face of being a praising tune, but it also makes a tangible connection, which is something that you don’t always see and it takes the song away from being one which only appeals to a certain few (who believe as you do) and turns it into something which EVERY decent person can follow.

“We’ve got to share this planet together
So why they fight and kill each other???”
The sweet natured ‘She’s My Comforter’ becomes the album’s love song. It is pretty much what you’d expect form such a tune from Apple Gabriel, but it isn’t harmful at all and actually has one of the better melodies here and the riddim really opens itself up (especially when the saxophone kicks in). Finally, Gabriel ends ”Teach Them Right” on another biblical note as he speaks of the ‘Tower of Babel’. Here is another tune which makes the increasingly NECESSARY connection of the spiritual and the tangible (“increasingly necessary” in my opinion, of course). A song really takes on an entire new meaning when an artist can make that leap and for someone with the experience of Apple Gabriel; it isn’t really a challenge at all.

SO! That’s it, nothing else! Just like ”Another Moses”, ”Teach Them Right” has ten vocal tracks . . . Oh! There are also seven dubs included as well, just as there were many on the ”Judgement Time” album (and apparently it is a practise which is going to be continued by the labels, from what I gather, and I like it). My favourite two, unsurprisingly, come from the tune ‘Hypocrites’ [‘Hypocrites Version’] which is a very powerful piece and definitely ‘In The Jungle’ [‘Jungle Version’]. But also be sure to have a listen to (all of them) the dynamic ‘Gifted Version’ as well as the ‘Holy Version’ from ‘Praise Jehovah’ (which I’m listening to now and is very very good).

Overall . . ., yeah! Like I said, this one pretty much couldn’t miss with its intended audience and after such people have come through the elation of having the first album from Apple Gabriel since the first number in their age (provided they have two digits) was one less than it is now (and probably the second one also). While I based this review on the concept of RESPECTED figures in Reggae music, what I found to be an interesting concept while going through the album is one which I’ve addressed before and it is the concept of NATURAL TALENTS. Despite all that Apple Gabriel has been through over the past decade, the fact that he can just kind of ‘appear’ and make such a powerful album is VERY interesting and it is one which certainly suggests that, through all of his bad times, he kept writing and singing music and perhaps it is at least part of the reason why he has achieved such a level of respect in his career as well. If it is so, Apple Gabriel and his talents are on FULL and VIBRANT display throughout ”Teach Them Right” and hopefully he doesn’t make us wait so long for a followup. Welcome back.